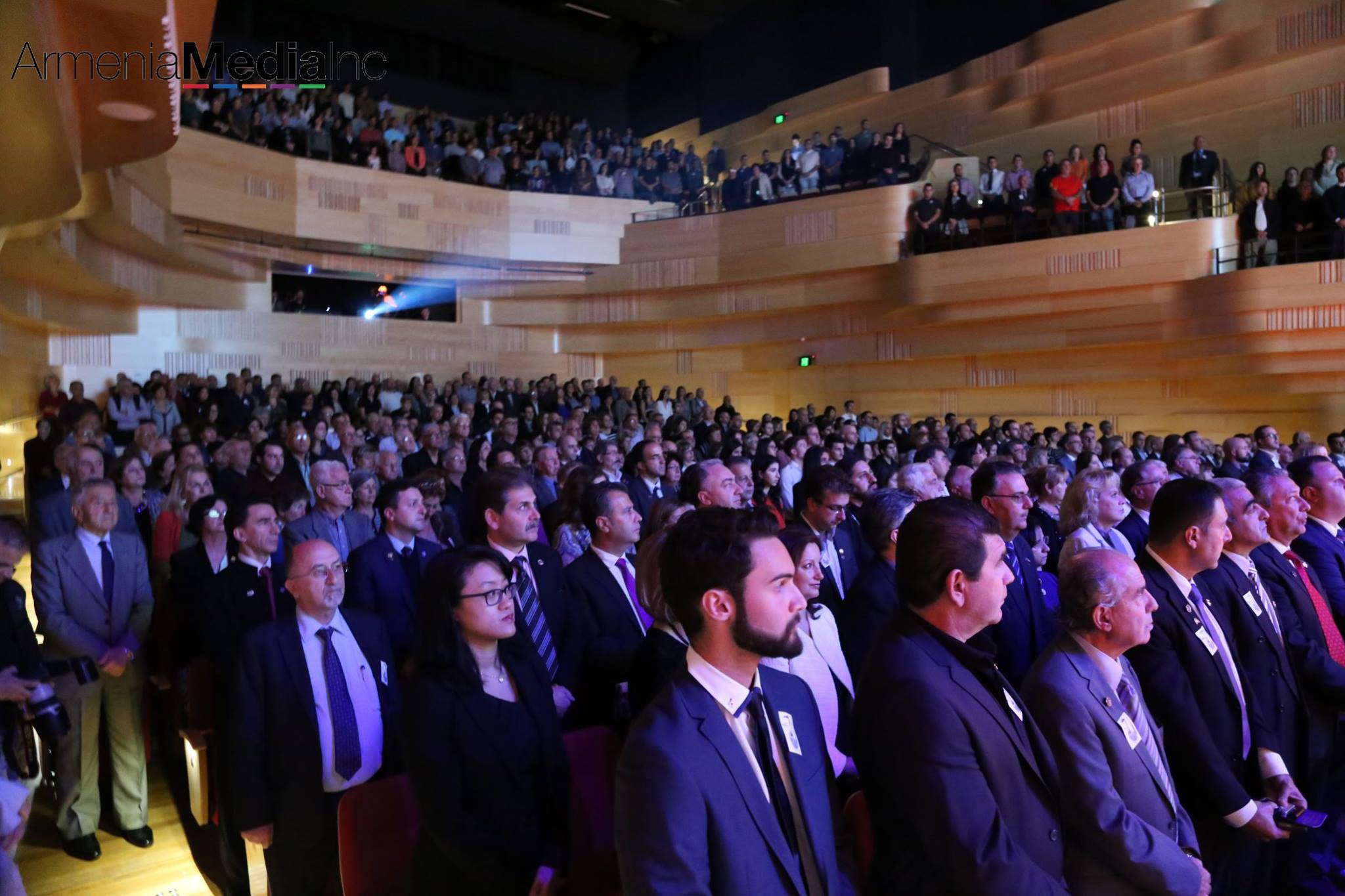 SYDNEY: Professor Peter Stanley was the Keynote Speaker before over 800 guests and community members at Australia’s National Commemoration Evening marking the 101st Anniversary of the Armenian Genocide, on Sunday April 24th at The Concourse in Chatswood.

From the Australian Federal Parliament, the Member for Bennelong, John Alexander and the Member for North Sydney, Trent Zimmerman – the representatives of two of the more densely Armenian-populated electorates were present to show their support for Federal recognition of the Armenian Genocide.

Also in attendance was Senator Lee Rhiannon from the Australian Greens Party, who expressed her party’s support for Federal Armenian Genocide recognition.

Also present, were Councillors from the City of Ryde and the City of Willoughby, as well as representatives of the Assyrian, Greek and Jewish communities.

The commemoration began with MCs Tamara Topouzian and Michael Kolokossian delivering powerful opening statements in English and Armenian, followed by traditional Armenian cultural acts including songs, dances and instrumental performances, reflecting on the cultural strength that has been a part of Armenians for generations.

Political statements were delivered by the various party representatives from Federal and State level, each re-affirming their positions and supporting full recognition of the Armenian Genocide by the Commonwealth of Australia, while acknowledging that Turkey needs to come to terms with its past and recognise the planned mass-deportations, murders, tortures and death marches as a genocide.

John Alexander remarked: “Through this human bridge that Armenians form here, we will continue to fight for recognition of the Armenian Genocide, and peace in Nagorno-Karabakh.”

Trent Zimmerman MP said: “It is important that all Australians recognise and commemorate the injustice and horror that was seen through the Armenian Genocide… My commitment to you tonight as a new Member of Parliament, is to work with you to ensure that Australia plays a stronger role in bringing that recognition to pass.”

Jonathan O’Dea as Chair of the Armenian-Australian NSW Parliamentary Friendship Group was given a round of applause when he stated: “The whole NSW Parliament has repeatedly acknowledged the Armenian Genocide.”

He added: “We meet again today 101 years later, but the resolve is no less. The lessons are truer today as much as they have been for the last 101 years, because we are seeing Armenians displaced in Syria, we are seeing Armenians being attacked by Azeris in Nagorno–Karabakh or Artsakh. So the message that we must remember is just as relevant today, not just because those people who suffered 101 years ago should be remembered, and should be part of our collective consciousness, but because what we face today as a world, and particularly what the Armenian people face, is a challenge which the world deserves and must support.”

O’Dea concluded his statement by asserting: “While we heard tonight welcome words from our Federal colleagues, the simple reality is Turkey indeed must acknowledge the Armenian Genocide, but closer to home, the Australian Government must do so as well.”

Courtney Houssos, representing the NSW Opposition leader, Luke Foley said: “On behalf of the NSW Opposition Leader, the Hon. Luke Foley MP, and all of my Parliamentary colleagues, I pay tribute to the Armenian Genocide Commemorative Committee who’s tireless work in arranging this event to be recognised, should be thoroughly commended. I pay tribute to everyone present here tonight, for your commitment to never let the Armenian Genocide be forgotten. Lest we forget.”

The Hon. Rev. Fred Nile on behalf of the Christian Democratic Party said: “I am pleased to do all I can to support this issue, and hope that we can encourage the Federal Government to have the courage to pass a similar resolution [to the NSW Parliament] and not be frightened by any reaction by the Turkish Government… It’s very important that we put truth and righteousness ahead of any political advantage to Australia.”

Armenian National Committee of Australia (ANC Australia) Executive Administrator, Arin Markarian, delivered the annual Advocacy Address. In his speech, he reminded everyone that Australia had once again, this year, failed to recognise the Armenian Genocide. He also touched upon significant events that had taken place throughout the past year since the Centenary of the Armenian Genocide, and how advocacy would be pursued in future.

“We are more determined than ever to see the Armenian Genocide recognised and for justice to be served… Interactions with think tanks and forums for diplomacy, politics and international relations and affairs will continue to be a primary action for us. High-level meetings with Members of Parliament, and a rejuvenated focus on the Armenian Genocide, post-Centenary will continue to be fulfilled, as long as our demands are not met,” said Markarian.

The Keynote Speaker, Military Historian and Author Professor Peter Stanley was a highlight of the evening. With this year’s commemoration focused on the Australian links to the Armenian Genocide, it was very appropriate that Stanley addressed the audience after co-authoring the book “Armenia, Australia & The Great War” with Sydney Armenian-Australia, Vicken Babkenian.

When speaking about Australians being present as eyewitnesses at the time of the Armenian Genocide, Professor Stanley said: “Australian soldiers and nurses, and especially Anzacs who were captured early by the Ottoman Turks, knew about the deportations and massacres at first hand and that is Australian evidence of the genocide. The prisoners of war especially, witnessed some of the deportations. Some of them lived in the houses and the Churches from which Armenians had lived in.”

Commenting on the humanitarian relief efforts in Australia, Professor Stanley added: “The awareness of the Armenian suffering at the time prompted an extraordinary and long-lasting humanitarian effort in Australia, which is largely forgotten. From 1916, Australian civilians, mostly Protestant Churchmen, and even more than that Churchwomen, raised huge amounts of money for Armenian relief organisations, which existed in all states. They raised large amounts of money even at a time when World War charities were making huge influxes from Australians’ pockets.”

Referring to his book, Stanley commented: “What Vicken [Babkenian] and I were trying to do through our book, is to bring these brave and dedicated people back to the attention of Australians and historians.”

The commemoration ended with a prayer and blessing from His Grace, Bishop Haigazoun Najarian, Primate of the Armenian Apostolic Church of Australia and New Zealand.