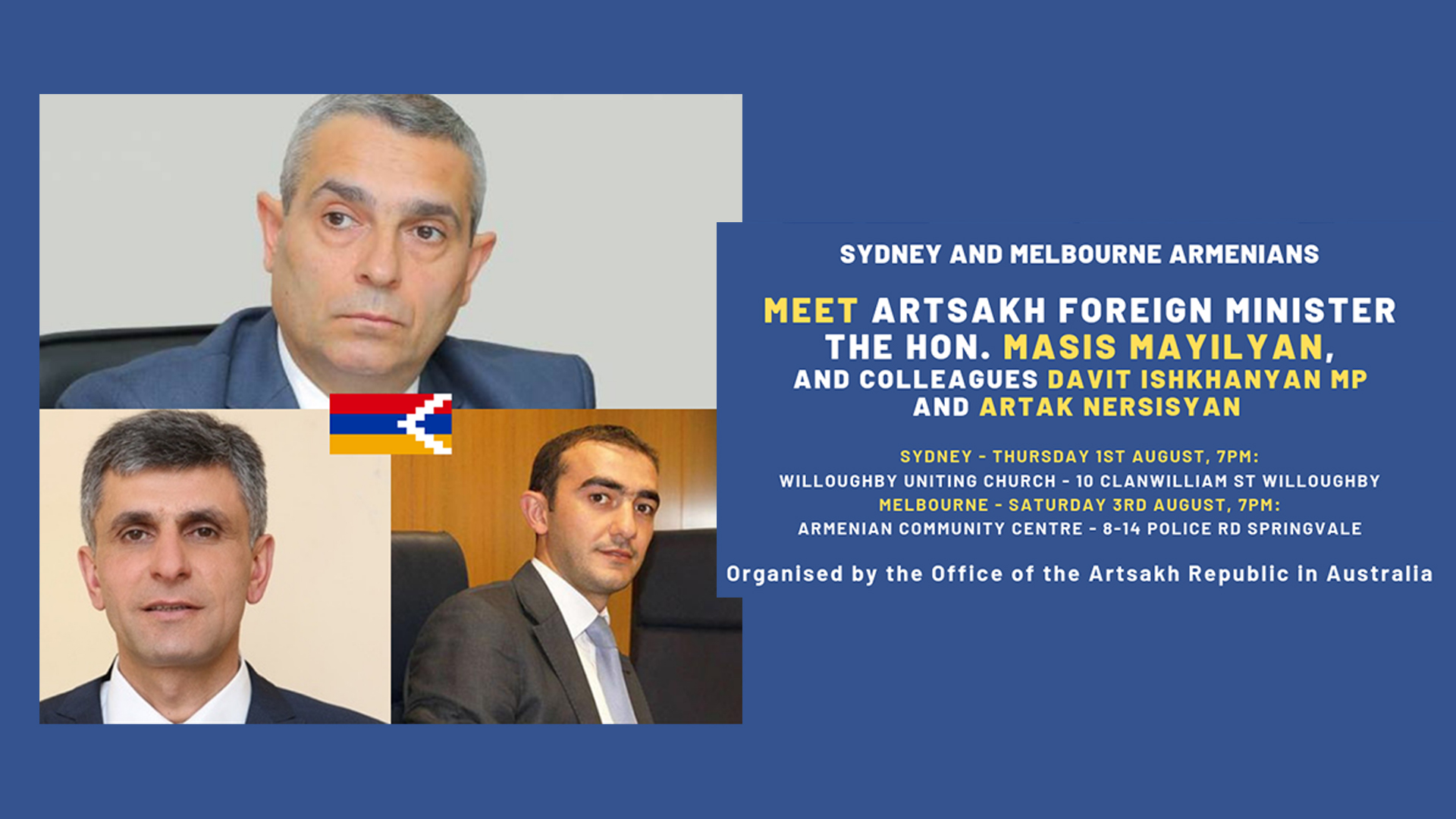 July 18, 2019 News ANC Australia
SYDNEY: Foreign Minister the Honourable Masis Mayilyan will lead the highest-level delegation from the Republic of Artsakh to ever visit Australia, when he arrives in Sydney with colleagues, Member of Parliament Davit Ishkhanyan and Foreign Ministry official Artak Nersisyan, announced the Armenian National Committee of Australia (ANC-AU).
The delegation will join ANC-AU in meetings with Australian political leaders in Canberra and Sydney.

“This delegation presents an important and unique opportunity for the Armenian-Australian community, in its efforts to better inform the Australian public as well as Australia’s political and thought leaders on the rights to self-determination of the Armenians of the Republic of Artsakh,” commented ANC-AU Executive Director, Haig Kayserian.

The delegation will also meet with the Armenian-Australian community at Sydney and Melbourne gatherings organised by the Office of the Artsakh Republic in Australia.

“This is an unprecedented opportunity for the Armenians of Sydney and Melbourne to meet with the Foreign Minister of the Republic of Artsakh in Mr. Mayilyan,” said Artsakh Republic’s Permanent Representative to Australia, Kaylar Michaelian.

“Mr. Mayilyan, Mr. Ishkhanyan and Mr. Nersisyan represent the most significant delegation to attend Australia from Stepanakert, and we look forward to our community taking advantage of the two opportunities we have organised to rub shoulders with those fostering democracy and nation building with the native population of the Republic of Artsakh in their proud and inspiring journey of self-determination,” Michaelian added.

Masis Mayilyan is a graduate from the Physics and Mathematics Department of the Artsakh State University. He completed his postgraduate studies in Social Psychology at the Khachatur Abovyan Armenian State Pedagogical Institute in Yerevan, before completing his qualifications at the Vienna Diplomatic Academy.

Mayilyan authored the book “The Karabakh Peace Process. A View from Artsakh” in 2016, and was appointed Foreign Minister of the Republic of Artsakh in 2017, after rising through the country’s diplomatic ranks over the years.

Davit Ishkhanyan is a Member of Parliament and head of the second-largest faction within the Artsakh Parliament. He entered politics after the war, where he was a distinguished commander, before the ceasefire saw him return to his roots in education (BA in History and Law) as Principal of Ashan’s high school.

Artak Nersisyan is the head of Information and Public Relations Department within the Republic of Artsakh Foreign Ministry.