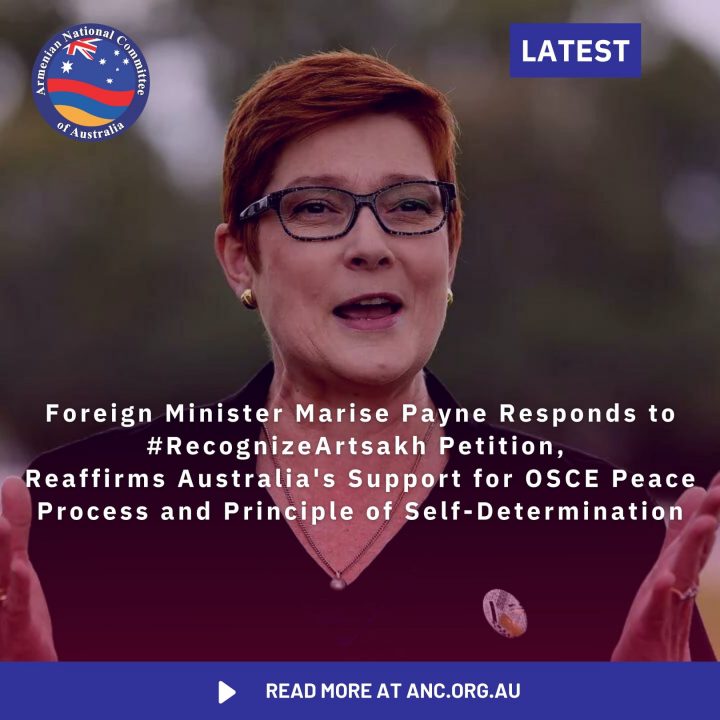 The petition, which was the sixth most signed with 3,164 signatories from the preceding 150 posted on the Australian Parliament’s website, was presented to the House of Representatives on Monday 15th February 2021 by Ken Dowd MP, Chair of the Standing Committee on Petitions, after Azerbaijan’s Turkey-backed military operations resulted in their occupation of the indigenous Armenian Republic of Artsakh.

In her response to the petition, which called on the Federal Government to “recognise the fundamental right to self-determination of the indigenous Armenians of Nagorno Karabakh”, Minister Payne reiterated the Australian Government’s support for the OSCE Minsk Group process and support for a peaceful solution guided by all three of the Helsinki Final Act principles, including the “equal rights and self-determination of people”.

This follows years of tireless advocacy by the Armenian-Australian community, led by peak advocacy group ANC-AU, addressing the Government’s long-held support of Azerbaijan’s “territorial integrity” whilst omitting reference to the “equal rights and self-determination” and “non-use of force” when citing the principles.

In her letter, Minister Payne also acknowledged the concerns of the Armenian-Australian community and the significant loss of life on both sides.

Minister Payne also declared Australia’s continued support for the mandate of all three Co-Chair countries of the OSCE Minsk Group’s to negotiate a permanent settlement to the conflict, and urged both sides to work with the body to establish a lasting peace.

“While we will continue to fight for Australia to recognise the rights to self-determination of the Republic of Artsakh, we appreciate the consistency of our Government’s position that equally supports all three principles to peace in Nagorno Karabakh and the mandate of the OSCE Minsk Group,” said ANC-AU Executive Director Haig Kayserian.

“To that end, it is worthwhile noting that while Armenia has demonstrated its willingness to engage in meaningful discussions with the OSCE Minsk Group and work towards lasting peace in the region, Azerbaijan continues to unleash aggressive military tactics – even invading the internationally recognised borders of Armenia since the 13th May 2021.”

“Azerbaijani President Ilham Aliyev’s illegal detainment and dehumanisation of over 200 Armenian POWs, including civilians, and his attempts to use Armenian POWs as political bargaining chips remains an obstacle to developing a peaceful settlement between the two nations.”

Kayserian added: “Minister Payne’s statement affirms that Australian Government’s formal policy is against such actions by Baku, and we will next push for formal Australian condemnation of the Aliyev regime’s anti-peace actions and their withdrawal from Armenia’s sovereign borders.”

ANC-AU remains in regular dialogue with Canberra regarding the unfolding situation in Armenia, most recently focusing on attacks launched by Azerbaijan against the Ararat, Gegharkunik and Syunik provinces.