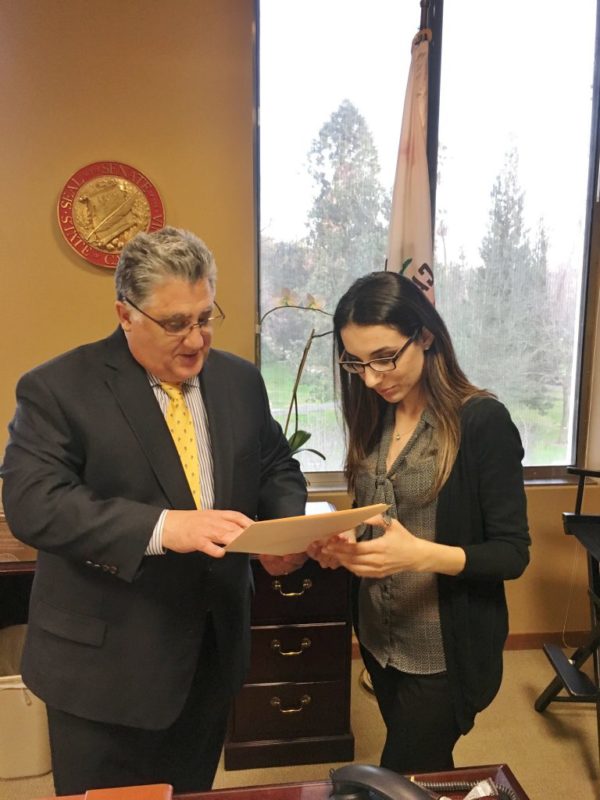 Applications Being Accepted for Next Session

Los Angeles, CA– Earlier today, the Armenian National Committee of America – Western Region proudly announced that the inaugural year of its Walter and Laurel Karabian Fellowship has yielded even greater success than anticipated, as Anahit Sargsyan, the first Karabian fellow, has been hired by State Senator Anthony Portantino to work as a Legislative Assistant at his state capitol office. The news comes just a few months after the organization announced the selection of Sargsyan and 6 months prior to when the fellowship session was scheduled to conclude.

“I was pleased to host the first terrific Karabian Fellow who had the skills and the talent to earn a spot on our team, and we are excited to have her,” said Portantino.

The fellowship is a nine month long program, divided into two phases, and designed to provide experience in government—both in a legislative setting, as well as in a policy, advocacy or political setting. Sargsyan began the first phase of the fellowship in fall 2016, working on the election campaign of State Senator Anthony Portantino (D-25). Portantino was so impressed by Sargsyan that he offered to have her complete the second phase of her fellowship at his Capitol Office. Thereafter, Portantino offered her a paid position on his staff. The objective of the Karabian Fellowship Program is to provide experience and potential job opportunities.

“We wish Anahit all the best as she continues on her new path in legislative affairs and extend our deep gratitude to Senator Portantino for putting faith in our program, recognizing Anahit’s ability, and making the inaugural year of the fellowship program more successful than we could have possibly imagined,” stated ANCA-WR Executive Director Elen Asatryan. “As we forge ahead to plan equally exciting opportunities in politics for our future fellows, we also pause to thank the Hon. Walter Karabian whose vision and generosity made this program possible,” added Asatryan.

The ANCA-WR is preparing for the second year of the fellowship, which will begin in September 2017. Prospective applicants may now apply by visiting ancawr.org/fellowship. Deadline to apply for the 2017-2018 fellowship program is April 15, 2017.

The first phase of the fellowship (September – December 2017), will include a placement with an advocacy organization, a labor union, think tank, or other setting where they could gain valuable political or public policy experience. Depending upon the opportunities available, and the fellow’s interests, the first phase may be spent in Sacramento, or elsewhere in the state. During the second phase—January through May 2018—the fellow will be placed in a legislative office at the State Capitol in Sacramento.