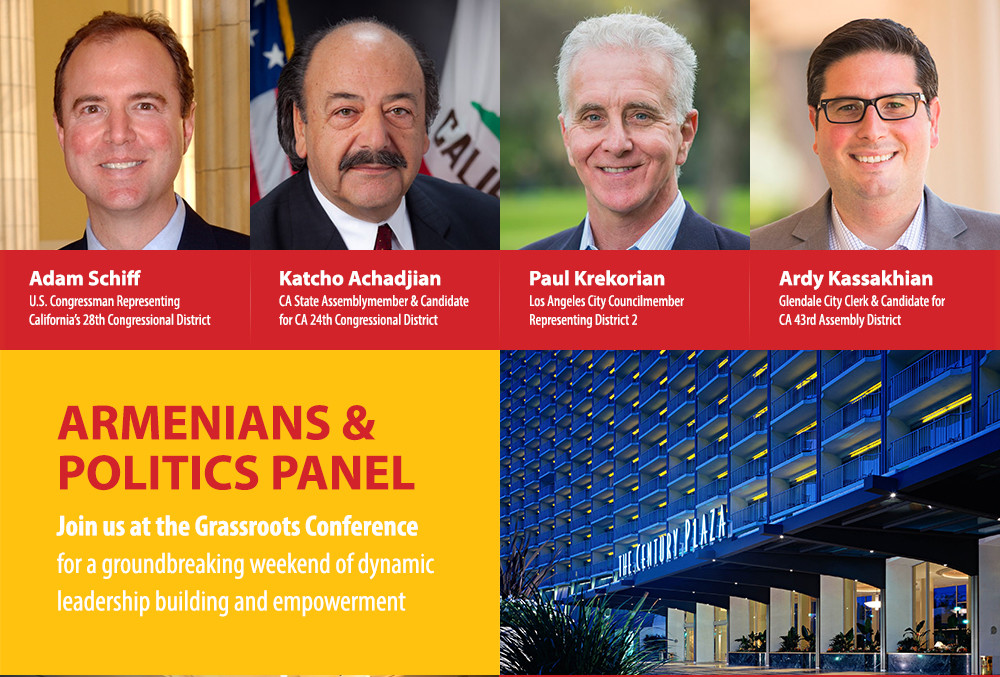 This year’s Armenian National Committee of America-Western Region Grassroots Conference, which will take place on October 23and 24 at the Hyatt Regency Century Plaza Hotel, will feature a unique panel to discuss the changing landscape for political activism by the Armenian-American community.

Representative Adam Schiff (D-Calif.) will be joined by California State Assemblymember and Candidate for US Congress Katcho Achadjian and Los Angeles City Councilmember Paul Krekorian who will each bring their expertise and knowledge to address the importance of activism and participation in the American political process. Glendale City Clerk and candidate for the CA’s 43rd Assembly District Ardashes “Ardy” Kassakhian will moderate the panel, scheduled for Saturday, October 24.

“This is a unique opportunity to hear first-hand from these distinguished public officials about the how the voice of the Armenian-American community can be heard more broadly in a changing political landscape that has seen decades of maturation,” said ANCA-WR Grassroots Committee co-chairman Ayk Dikijian, Esq.

As representative of California’s 28th Congressional district, Rep. Adam Schiff serves the largest Armenian constituency outside of Armenia with his district spanning through Glendale, Burbank, La Crescenta and Hollywood. Schiff is no stranger to advocating for Armenian-American concerns in Congress. Since his first election to the House of Representatives in 2000, he has been a staunch supporter of Armenian issues, including introducing Armenian Genocide recognition resolutions, supporting the right to self-determination of the people of Artsakh, encouraging the development of Armenia, addressing the concerns of his Armenian constituents in California, as well as helping to secure foreign aid for Armenia and Artsakh and most recently humanitarian assistance for Syrian-Armenian refugees.

Before he was elected to Congress, Schiff served State Senator for California’s 21st State Senate District, chairing the Senate Judiciary Committee, the Senate Select Committee on Juvenile Justice and the Joint Committee on the Arts, and he served the U.S. Attorney’s Office in Los Angeles for six years, most notably prosecuting the first FBI agent ever to be indicted for espionage.

Achadjian has been a pro-active leader on each and every pro-Armenian state-level initiative during his tenure in Sacramento. He helped lead the historic California State Legislative Delegation visit in 2013 to both the Republics of Armenia and Nagorno Karabagh, and served as host for the Nagorno Karabagh Parliamentary Speaker’s visit to the State Capitol. He played a vital role in California’s recognition of the Republic of Nagorno Karabakh, and was the lead sponsor, in 2012, of Assembly Joint Resolution 34 (AJR 34), which called on the Republic of Turkey to respect religious freedom by returning stolen Armenian Churches and other church properties. Achadjian is also a founding member of the Armenian Legislative Issues Caucus in Sacramento.

Because of his strong bi-partisan legislative credentials, Achadjian is the only Republican to have been appointed to Chair a committee in the State Legislature. He currently serves as Chair of the Assembly’s Local Government Committee, and as a member of the Assembly Committees on Accountability and Administrative Review, Banking and Finance, Transportation, and Joint Legislative Audit.

Katcho Achadjian holds a degree in Business Administration from Cal Poly San Luis Obispo. Prior to holding office, Katcho founded a successful local business, where he gained a strong appreciation for the need to streamline government regulations. Prior to joining the State Legislature, he served three terms as an elected member of the San Luis Obispo County Board of Supervisors. Notably, Katcho was also appointed by the Governor of the State of California in 2006 to the powerful California Coastal Commission before joining the State Assembly.

Last Spring, Achadjian, a Republican, announced his bid to run for Congress to represent the 24th district. In August, the ANCA-WR endorsed Achadjian’s candidacy, calling him “an inspiring leader, a great legislator, a devoted public servant, and a wonderful role model of civic responsibility.”

Los Angeles City Councilmember Paul Krekorian, in the past several decades has taken the initiative to create various avenues of support and education about Armenian issues on the local, state and federal levels. Paul led the City Council this year for citywide commemorations of the 100th anniversary of the Armenian Genocide. He is also the past recipient of the ANCA-WR Legislature of the Year award.

Born and raised in the San Fernando Valley, Paul Krekorian has spent a decade in public service. Since 2010, he has served on the Los Angeles City Council where his leadership as chairman of the Budget and Finance Committee helped guide the city through the Great Recession and toward greater economic promise. He is also the chairman of the Committee of Job Creation, serves on the board of the Los Angeles County Metropolitan Transportation Authority (Metro) and Metrolink, and is a member of the San Fernando Valley Council of Governments, a coalition of leaders advocating for the Valley’s two million residents

Councilmember Krekorian graduated from Reseda’s Cleveland High School before earning his B.A. in political science from the University of Southern California and a law degree from UC Berkeley. Upon graduating, he spent two decades practicing business, entertainment, and property litigation, while also devoting his time to reducing domestic and gang violence.

In 2006, after three years on the Burbank Board of Education, Paul won election to the California State Assembly, representing the 43rd District. He worked on landmark legislation to improve the environment, and authored the state’s first successful film and television production tax incentive, which stemmed the tide of runaway production and secured thousands of California jobs.

Glendale City Clerk Ardashess “Ardy” Kassakhian who will moderate the panel at ANCA-WR Grassroots, announced his candidacy for the California State Assembly 43rd district and is endorsed by the ANCA-WR.

Kassakhian launched his Assembly campaign last year. Since that time, he has been meeting with voters and community leaders from Los Feliz to La Cañada to get their perspectives on issues facing their communities. Kassakhian is running to represent Assembly District 43, which includes the communities of Burbank, Glendale, La Cañada Flintridge, La Crescenta-Montrose and the Los Angeles neighborhoods of Atwater Village, East Hollywood, Franklin Hills, Hollywood Hills, Los Feliz and Silver Lake. The primary election will be held on June 7, 2016.

Kassakhian grew up and attended public schools in Glendale. He was first elected Glendale City Clerk in 2005. As Clerk, he has reduced government waste by introducing environmentally sound practices, made election information easier to access and worked to increase voter participation.

Prior to winning his bid for Clerk, Kassakhian served ANCA Western Region’s Governmental Affairs and Executive Director from 2001-2004. During his tenure, Kassakhian advocated for increased trade and cooperation between the US and Armenia, recognition of the Republic of Artsakh (Nagorno Karabagh), for official US reaffirmation of the Armenian Genocide and for the rights of Armenian-American citizens around the U.S.

Ardy graduated from UCLA and the Executive Program at Harvard University’s Kennedy School of Government. He lives with his wife Courtney and their young son in Glendale.

The ANCA-WR Grassroots conference will take place on October 23 and 24 at the Hyatt Regency Century Plaza Hotel. Admission to the conference is $85 and $50 for students. However, the committee is offering early registration incentives of $55 and FREE admission for students if registration is completed by October 1. Visit https://www.ancawr.org/grassroots/register/

This year’s ANCA-WR Gala Banquet will be one of the largest the organization has hosted. The event, which has become one of the most anticipated events of the calendar year, will be held on Sunday, October 25 at the Hyatt Regency Century Plaza Hotel. For information about purchasing tickets, corporate and tribute sponsorship opportunities, please visit https://www.ancawr.org/gala/.