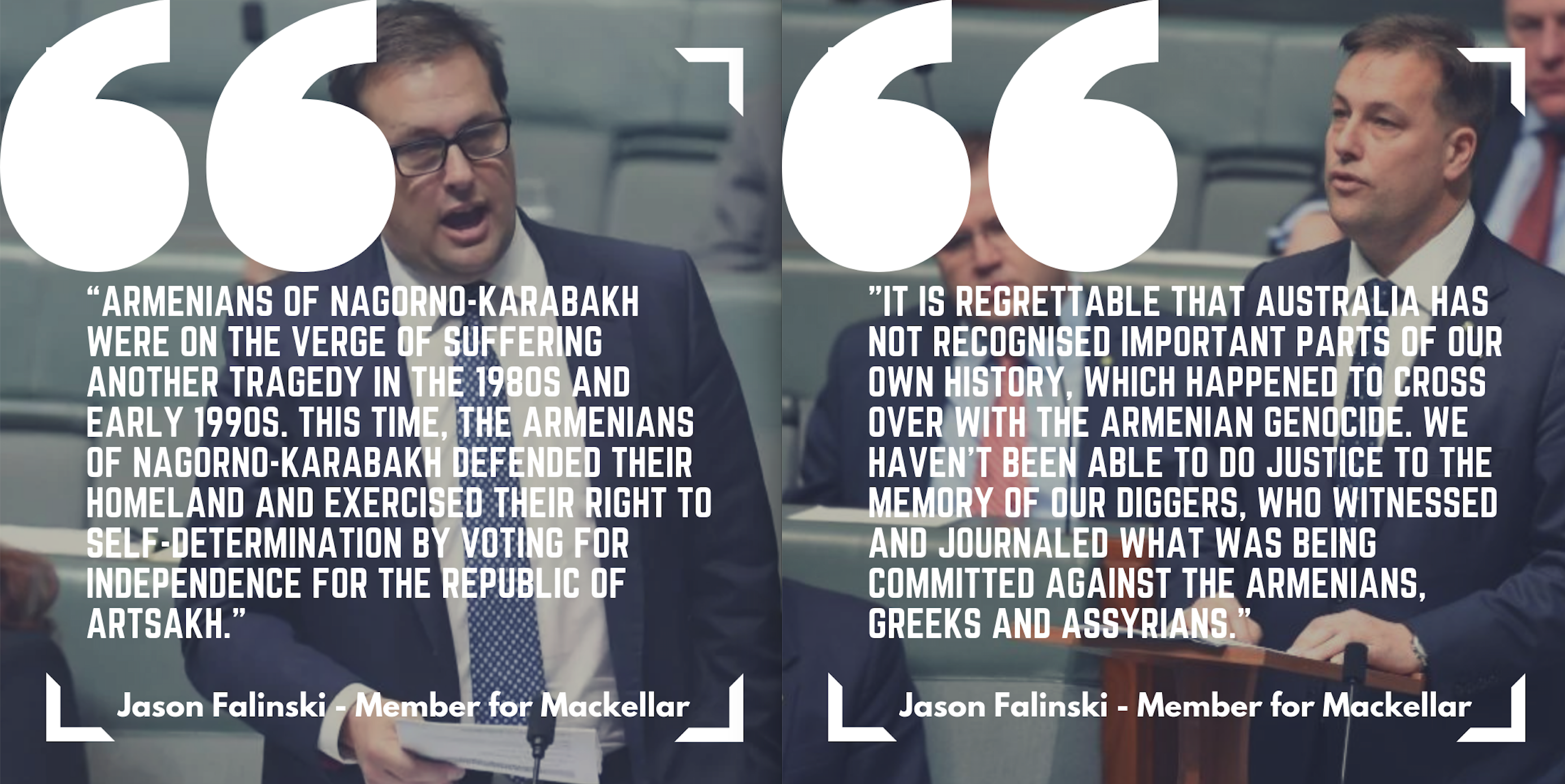 CANBERRA: The Federal Member for Mackellar, Jason Falinski stood in Australia’s Parliament on 17th October 2018, in support of the the rights for self-determination of the Armenians of the Republic of Artsakh while adding his voice in support of the Motion recently debated by the House of Representatives, which called on Australia to recognise the Armenian Genocide through the prism of Australia’s first major international relief effort aiding the genocide’s survivors.

With his support for Artsakh, Falinski became only the fourth MP in Australia’s Federal Parliament to speak for the rights of the Armenians in Nagorno Karabakh to self-determine their status as an Independent Republic, stating: “I join the Armenians of Mackellar in congratulating the Republic of Artsakh, which was declared independent 27 years ago.”

Before discussing Artsakh, Falinski added his voice of support for Australia’s recognition of the Armenian Genocide.

He said: “As Adolf Hitler was considering committing the Holocaust, many in his country and around the globe warned him that it would be a legacy that Germany would never be forgiven for. He said, infamously, that it would not matter—for who, after all, remembers the Armenians? Well, we must, this House must, and our nation must. For there to be justice, first there must be truth.”

“Australia’s first major humanitarian effort can be traced back to 25 April 1915, when Australian soldiers responded to calls from persecuted survivors of the Armenian genocide. For there to be justice, first there must be truth,” he said. “With that, it is regrettable that Australia has not recognised important parts of our own history, which happened to cross over with the Armenian genocide.”

“In June this year, my colleague the member for Goldstein called on us all to speak of the tragedy’s name: genocide. I join in this call. This taboo needs to end.”

In a pivot to the issue of Artsakh, Falinski said: “Armenians of Nagorno-Karabakh were on the verge of suffering another tragedy in the 1980s and early 1990s. This time, the Armenians of Nagorno-Karabakh defended their homeland and exercised their right to self-determination by voting for independence for the Republic of Artsakh. I joined the Armenians of Mackellar in congratulating the Republic of Artsakh, which was declared independent 27 years ago.”

The Armenian National Committee of Australia (ANC-AU) led a delegation of ANC-AU Youth Advocates to Parliament House, and as a result, over 20 Armenian-Australians witnessed Falinski’s powerful speech.

“We thank Mr. Jason Falinski for stating on the public record, his principled positions on Australia’s obligation to recognise the Armenian Genocide and acknowledge the rights to self-determination for the Armenians of Artsakh,” said ANC-AU Executive Director, Haig Kayserian. “The momentum continues to build on Armenian issues, which has been especially apparent since the 25th June House of Representatives debate in support of Australia’s recognition of the Armenian Genocide.”

Falinski went on to mention the ANC-AU Youth Advocates in his speech, and also touched on his recent visit to Hamazkaine’s Galstaun College – which sits in his electorate.

He said: “I salute the member for North Sydney’s [Trent Zimmerman) motion debated in the Federation Chamber on 25 June. I look forward to the day that Australia’s formal position reflects that will. As Diana and Sarine told me this afternoon, at school as proud Australians they celebrated Gallipoli, but, as Australians with Armenian background, it felt strange that we ignored our nation’s effort in Armenia in that same campaign. If one of us feels excluded, are not all of us excluded? Are we whole as a nation of people?”