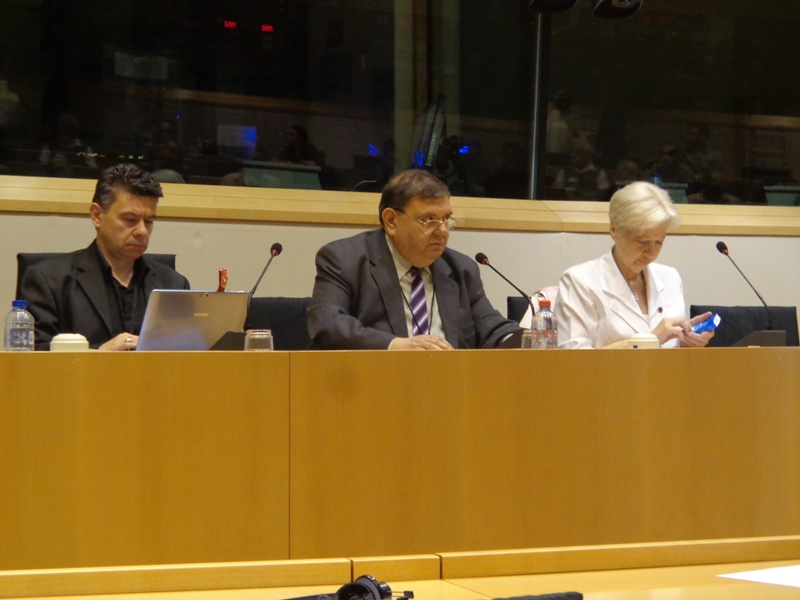 Brussels, June 3, 2015: On the Initiative of the EU Armenia Friendship Group in the European Parliament and the European Armenian Federation for Justice and Democracy (EAFJD) a panel discussion entitled “Conflicts and the right to self-determination” took place in the European Parliament on Wednesday, June 3. The panel discussion focused on Nagorno-Karabakh conflict, its structure, historic and legal aspects with a special emphasis on the right to self-determination.

EAFJD President Kaspar Karampetian opened the panel discussion hosting a number of politicians and distinguished guests from academia. He thanked Eleni Theocharous, MEP, President of EU- Armenia Friendship Group in the European Parliament for making this panel discussion possible, he expressed his satisfaction over the high profile speakers and the number of guests from various countries; he stressed, that such discussions are an important step for Nagorno-Karabakh’s international recognition.

HE Tatoul Markarian, Ambassador Extraordinary and Plenipotentiary of the Republic of Armenia to the Kingdom of Belgium, Head of Mission of Armenia to the European Union was represented by Mnatsakan Safaryan – counsellor of the Mission of the Republic of Armenia to the European Union. On behalf of the Ambassador he said the following: ‘The activities of the European Parliament in this matter, hearings like this, visits to the region and discussions, help to further increase the awareness within the European Parliament and European institutions and keep the Nagorno Karabakh issue in the limelight of the international community thus signaling to Azerbaijan to stop its warmongering and focus on the peaceful settlement’.

MEP Dr. Eleni Theocharous was the key-note speaker of the panel discussion. Prof. Dr. Andrzej Zieba from the Jagellonian University of Krakow Poland, Dr. Ohannes Geukjian from the American University of Beirut Lebanon, Dr. Yiannos Charalambides from Cyprus, Xavier Follebouckt from Louvain la Neuve University, Belgium were the participants of the panel. The discussion was moderated by Giro Manoyan, Director of the International Secretariat ARF Dashnaktsutyun, Armenia.

MEP Dr. Eleni Theocharous drew parallels between the conflict in Cyprus and Nagorno-Karabakh: “Currently, we are experiencing and living a similar struggle through the Armenian people of Nagorno-Karabakh who are fighting to exercise their right to self-determination in order to achieve their freedom and thereby, define their own future and their destiny.” “The right to self-determination is enshrined within Article 1, Paragraph 2 of the UN Charter, it is the cornerstone for freedom and the symbol by which people all over the world, are inspired and encouraged to take their lives into their own hands,” said Dr. Theocharous.

Prof. Dr. Andrzej Zieba’s contribution focused on the historic aspects of the conflict: “The necessity to deal with the crisis of political setting was the main reason for conflict in Nagorno-Karabakh. Caucasus was a conflict-trigger itself, but so was the case for any other region in the world. The presence and simultaneous unsteadiness of outside powers in South Caucasus impaired the effect of historical state-building processes and did not allow consolidation of the local hierarchy of political structures. It was the historical aspect which renews the military rivalry for territory until this day,” said Dr. Zieba.

Dr. Yiannos Charalambides , political analyst from Cyprus, elaborated on the structure of the conflict and the right to self-determination. He stressed the necessity to find out the causes triggering a conflict, in order to resolve it. He further raised the question if the right to self-determination is a source of conflict or a fundamental legal and political basis for a solution. Dr. Yiannos Charalambides further stated: “The people of Nagorno-Karabakh meet all the relevant criteria set out by the international law. The Armenians living there constitute an indigenous population carrying on their backs a vast civilization, while at the same time they had not settled in the region as conquerors of other nations. In accordance with the international law, Artsakh is their ancestral land. Certainly ethical reasons and the clauses of the international law are not, on their own, adequate factors for a solution to a problem. The art of diplomacy is the skill of coupling legal rights and clauses with national strength.”

Analyzing the current state of affairs Xavier Follebouckt from the Louvain la Neuve University, Belgium said: “It will be hard to achieve peace. But peace will always be worth the effort, worth the unavoidable compromises. Because peace will not only put an end to the violence and the instability on the ground; it will allow societies on both sides of the frontline to reach across this divide, to look towards the future and start building their nations on solid foundations, rather than on historical grievances. “

Elaborating on the legal aspects of the conflict Dr. Ohannes Geukjian from the American Univerisity of Beirut, Lebanon concluded: “My argument maintains that if Nagorno-Karabakh can perform the requisite political functions, the existing state has no jutification for its nonconsensual coercion. In other words, when a nation is sufficiently large, economically sustainable, politically organized and territorially contiguous (like Nagorno-Karabakh), it can secede and thereby enhance its national self-determination without jeopardizing political stability.”