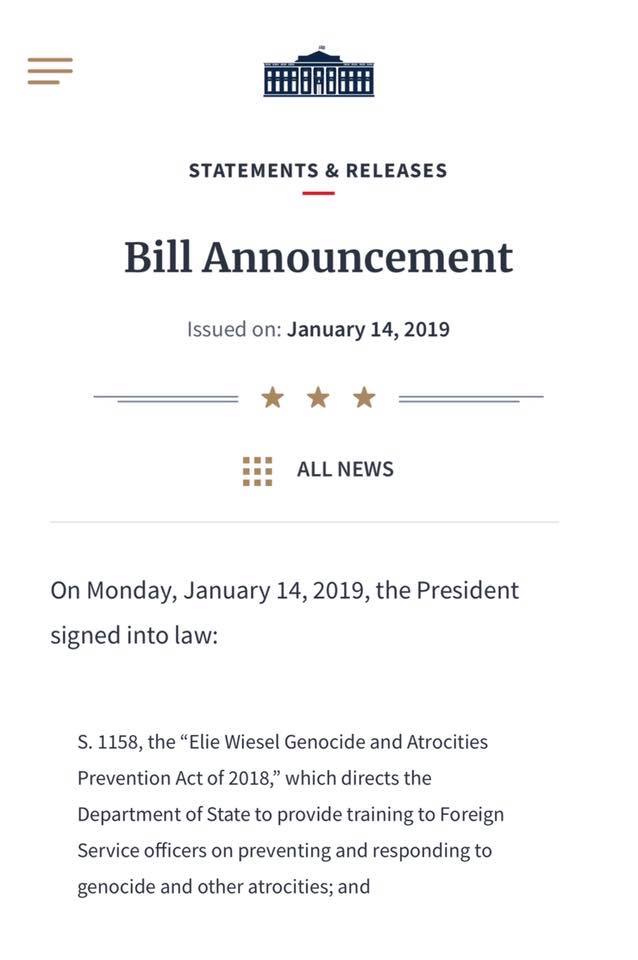 WASHINGTON, DC – Earlier today, President Donald Trump signed the Elie Wiesel Genocide and Atrocities Prevention Act, a ground-breaking genocide prevention law, overwhelmingly adopted by the Senate and House, which codifies earlier measures, including those implemented by the Obama Administration, and puts in place a set of clear policies and processes to prevent new atrocities.

“The ANCA welcomes the President’s signature on the Elie Wiesel Genocide and Atrocities Prevention Act, and thanks all the legislators who spearheaded and supported this landmark bipartisan genocide prevention measure,” said ANCA Executive Director Aram Hamparian. “As Armenian Americans – descendants of the survivors of the Armenian Genocide – we are particularly gratified to see a measure signed into law that speaks to transitional justice, criminal accountability, and the moral imperative to apply the lessons of past genocides in seeking to prevent new atrocities.”

The genocide prevention measure was spearheaded by Senators Ben Cardin (D-MD), Todd Young (R-IN), and Thom Tillis (R-NC) in the Senate and by Representatives Ann Wagner (R-MO) and Joe Crowley (D-NY) in the House during the previous Congress and received broad bipartisan support.  It enjoyed broad-based support from genocide and atrocities prevention organizations with the Friends Committee on National Legislation at the forefront along with over 70 grassroots groups, including the ANCA and In Defense of Christians.

The law states that U.S. must regard the prevention of genocide and other atrocity crimes as a core national security interest and moral responsibility. To that end, it calls for the creation of a task force to strengthen State Department efforts and assist other agency efforts at atrocity prevention and response.  The law also calls for the training of Foreign Service Officers “on recognizing patterns of escalation and early warning signs of potential atrocities, and methods of preventing and responding to atrocities, including conflict assessment methods, peacebuilding, mediation for prevention, early action and response, and appropriate transitional justice measures to address atrocities.”

As part of the new provision, the President is required to transmit a report to Senate and House Committees on Foreign Affairs and Appropriations, offering a review of countries and regions at risk of atrocity crimes, the most likely pathways to violence, specific risk factors, potential perpetrators, and at-risk target groups.

The law also calls on the State Department and the U.S. Agency for International Development to support programs and activities to prevent or respond to emerging or unforeseen foreign challenges and complex crises overseas, including potential atrocity crimes.