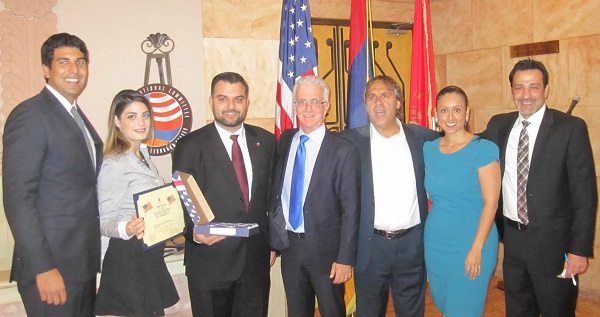 Baronian thanked all the attendees for their continuous support of the ANCA-SFVE throughout the years and explained that the purpose of the Community Reception was to create an intimate setting for members of the local Armenian-American community to meet with local public officials, community leaders, and each other.

He went on to highlight recent accomplishments of the east San Fernando Valley Armenian community, including newly expanded social services being offered by the North Hollywood chapter of the Armenian Relief Society and a recently initiated youth sports program of the North Hollywood chapter of the Homenetmen Athletics and Scouting Union. Baronian emphasized that the ANCA-SFVE will continue to serve as the facilitator for these and all other local community organizations to aid them with securing the necessary governmental assistance, funding, and other resources to expand such programs.
Baronian announced that the ANCA-SFVE will be hosting a College Workshop Seminar in February for east San Fernando Valley high school and college students planning to apply or transfer to universities. He also introduced a recently launched initiative of the ANCA-SFVE to build an extensive information technology platform to mobilize the local Armenian-American community.

Los Angeles City Councilmember Paul Krekorian thanked the ANCA-SFVE for its years of service and stated, “It was a great evening with the San Fernando Valley-East ANCA at the Armenian-American community reception. The organization has done a great job of engaging the community and promoting activism.”

Los Angeles City Councilmember Nury Martinez commended the ANCA-SFVE for its work and for introducing her to Tereza Yerimyan, Government Relations Director at the ANCA-WR, whom she showered with praise for her professionalism and dedication. She proceeded to thank “the Armenian National Committee of America – East San Fernando Valley Chapter for inviting me to your reception this evening. I look forward to continuing our work to make our community a better place.”