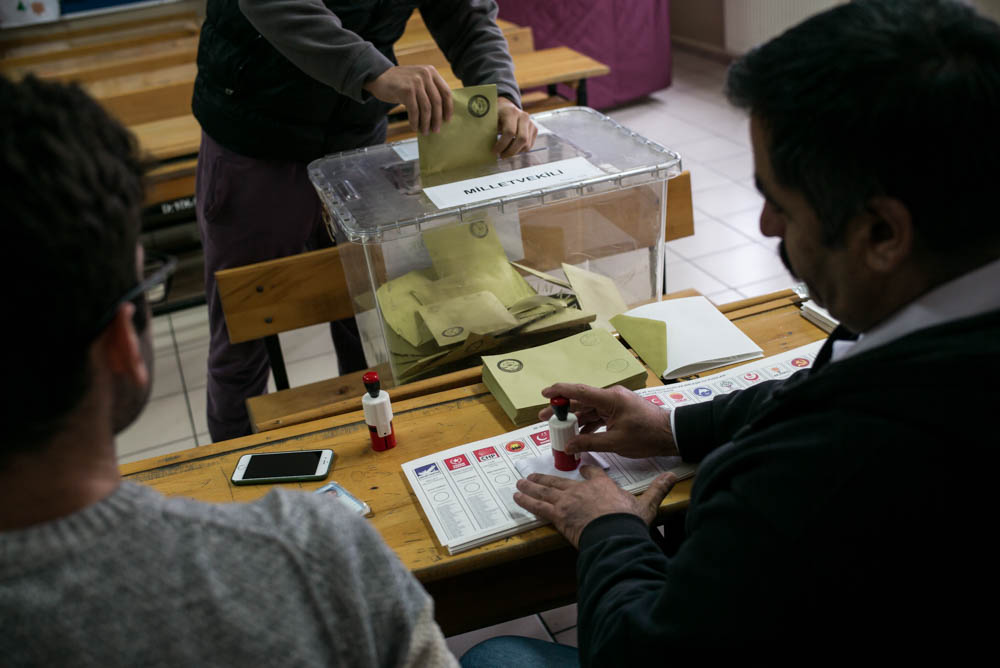 Upon the invitation of the Peoples’ Democratic Party (HDP), the European Armenian Federation for Justice & Democracy (EAFJD) sent a three-member short-term election observation mission to the observe the parliamentary elections in Turkey on 1 November, 2015.

The delegation observed the elections in 12 polling precincts in the electoral district #3 in Istanbul: Bağcılar and Esenyurt.

General conclusions and findings of the EAFJD delegation, based on its observations in the election districts and HDP briefing on 31 October

– Tragic pre-election events, such as the explosions in Suruc and Ankara and the actions of the AKP-led government of Turkey created an atmosphere of distrust, fear and intimidation, particularly among the electorate of the opposition parties, specifically that of HDP.

– HDP Party members and supporters were attacked and detained (mainly in the Kurdish regions, and in Istanbul). HDP found itself in the situation of not being able to carry out a pre-election campaign and gatherings.

– Turkish President R. T. Erdogan used the whole leverage of the state (budget, media, plane, etc.) in support of AKP which is a clear violation of the constitution and electoral law.

– The Government continued clamping down on opposition media and critics.

– In certain precincts where HDP earlier received 90 % of the votes the Government had moved the polls to distant places (in some cases 70 km away), justifying this by security concerns.

The EAFJD delegation split into two groups. The groups visited nine precincts in Esenyurt and three precincts in Bağcılar, to observe the election process on 1 November.

– EAFJD observers were often prevented from observing the voting process by the police or AKP observers in the precincts. The latter insisted, often aggressively, that the Turkish electoral code requires Turkish citizenship as a prerequisite for observing the elections and that it does not foresee the presence of international observers. In order not to escalate the situation, the HDP observers in the precincts decided not to insist on the presence of the international observers.

– EAFJD observers of the second group encountered an intimidating behavior of the police in two precincts observed, at Esenyurt’s Ibrahim Ozaydin school and at Esenyurt #80 Yil ortakolu. The police took photos of the IDs of the EAFJD observers and aggressively emphasized their Armenian origin.

– In the precincts where the EAFJD delegates were allowed to observe the voting process, they reported smooth voting process. This was also confirmed by the HDP observers in the polling stations. It was however reported that the presence of the armored police vehicles in certain precincts produced psychological pressure on the voters. In one of the precincts HDP observers reported that the local electoral committee subtly discriminated against some voters, who needed assistance and could be identified as Kurdish, by not providing them with assistance.

Detailed observations in the precincts on the voting day

The EAFJD delegation split into two groups. One of the groups managed to visit three precincts due to technical and logistic difficulties, such as delays of departure whereas the second group observed the voting process in nine precincts.

Shortly after their arrival in the polling precinct located in the school after Hasan Kaleli and following a tense, loud discussion between the proxies of the AKP party and the HDP party in the corridor of the school, the EAFJD observers were asked to leave the precinct. The observers of the AK party vehemently opposed the presence of international observers invited by HDP, that is the presence of the EAFJD delegation in this case. The loud, rather tense discussion attracted a number of people in the corridor of the school and comments such as “Why do international observers need to be here?” fell by AK Party observers. An observer of the AK Party continued pointing at the electoral code of Turkey which based on their interpretation defines Turkish citizenship as a prerequisite for being an observer during the elections in Turkey. According to this interpretation, the Turkish law does not foresee the presence of international observers. In order not to escalate the situation and keep calm atmosphere in the polling precinct, the HDP proxies advised the EAFJD delegation to leave the precinct. The HDP observers reported that aside from the similar attempts of the representatives of the AK Party to provoke tension, the voting process went quite smoothly.

EAFJD delegates were warmly welcomed by the HDP representatives who said that they would certainly like the delegates to observe the voting process. It was however clear that this would escalate the situation and trigger an aggressive behavior of the AKP observers and proxies. In order not to cause any tension, the EAFJD observers were asked to leave the precinct. The HDP observers did not report major irregularities of the voting process.

EAFJD observers received a friendly welcome and could observe the voting process without hindrances. It was reported that before the arrival of the EAFJD observers armored vehicles of the police entered the school yard under the pretext of dispersing the peaceful groups of people gathered in the yard. According to the witnesses, the number of the people gathered was not high and they were peaceful. It was reported that the police undertook such measures to produce psychological pressure on the voters. It was also reported that the local electoral committee in the precinct subtly discriminated against voters who needed assistance and could be identified as Kurdish by not providing them with assistance.

In Ibrahim Ozaydin the police held the EAFJD observers for approximately 45 minutes, photographed their IDs and recorded the information on it twice. The policemen aggressively emphasized their Armenian origin and said that people from Armenia had nothing to do there.

The mayor of Esenyurt Necmi Kadıoğlu, (AKP member) walked in the precinct in Toki Ernek ilk okulu in Esenyurt with an entourage of more than 20 members. It was evident that he was trying to influence those in the precinct to vote for AKP. He had demonstratively friendly communication with the police.

In Esenyurt 80 yil ortaokulu the AKP observers were carrying visible party logos, which is clearly a violation of law. When this fact was pointed out by the HDP observers, the police interfered and after a brief dispute, EAFJD observers had to leave the precinct. Their names were recorded, IDs were photographed. When the police officers realized that the observers had Armenian origin, remarks, such as: “Ok, now we understand” were made.