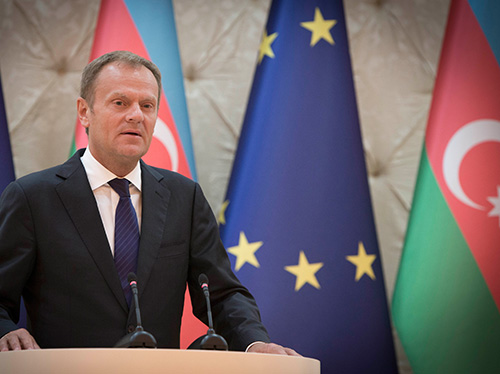 His Excellency
President of the European Council
Mr. Donald Tusk

Subject: Your recent statement on the cooperation between the European Union and Azerbaijan

On 20 July – 22 July of the current year you visited Armenia, Georgia and Azerbaijan. The European Armenian Federation for Justice and Democracy (EAFJD) attaches great importance to such visits and as well as to a close and strong cooperation between the European Union and Armenia. EAFJD highly appreciates your emphasis on the necessity of the peaceful resolution to the Nagorno-Karabakh conflict.

During your visit to Azerbaijan on 22 July you stated that Azerbaijan is a reliable and strategic partner in the energy field and spoke of moving EU-Azerbaijan relationship forward through an ambitious new bilateral agreement and of setting a brisk pace for the talks towards an Agreement on Strategic Partnership.

The European Armenian Federation for Justice and Democracy certainly welcomes the active role of the European Union in the region. EAFJD regrets however that with such statements the European Council is sending the wrong message to the people genuinely fighting for democratization, human rights in Azerbaijan and peace in the region. In a way it is legitimizing the politics of repression and hate-filled war rhetoric of the current Azerbaijani Government. It is also damaging the credibility of the European Union as an international actor in the region, turning the calls for respect for human rights and peace into mere words and showcasing that all this plays little role when it comes to cooperation.

EAFJD recalls the Resolution adopted by the European Parliament on 17 September 2014 according to which “EU support for and cooperation with the Republic of Azerbaijan, including the ongoing negotiations for a Strategic Modernisation Partnership, must be conditional on and include clauses relating to the protection and promotion of human rights…”.

All the deep concerns and criticism expressed by the European Parliament, the Council of Europe and renowned watchdogs such as the Human Rights Watch, Amnesty International regarding the persistently aggravating human rights situation in Azerbaijan in the past years have been responded by either angry or cynical remarks by the current Azerbaijani Government.

The urgent calls of the European Parliament (expressed in a number of resolutions) and human rights organizations to immediately and unconditionally release the human rights activists and withdraw all the charges against them have practically been ignored by the current Azerbaijani Government. In its Resolution from 17 September 2014 the European Parliament repeated its position of 24 May 2012 which called on the Council to consider the possibility of targeted sanctions against those responsible for human rights violations if these persist. Nothing has changed. The Azerbaijani Government successfully continues its politics of spreading fear and silencing free speech. Nonetheless, it is being rewarded by prospects of ambitious cooperation.

EAFJD recalls the above-mentioned EP Resolution which deplores the actions of the current Azerbaijani Government to curb contacts between civil society, youth activists and intellectuals from Armenia and Azerbaijan, since these contact are of major importance for bridging the two societies and for the peace process. Both Leyla Yunus and Arif Yunus who have done an important work in this regard are still in prison based on clearly trumped up allegations.

Taking all this into consideration the logical question that rises is: “How can a government that actively hinders the grass-root peace process, encourages hate speech and spreads war rhetoric, silences free speech by harassing and imprisoning its citizens, ignores European institutions and international human rights watchdogs, prevents the latter from entering the country be considered a reliable or trustworthy partner even if this partnership is business-related ?”.

EAFJD sincerely hopes that by taking an adequate political stance on the current relations with Azerbaijan and its Government the European Council stays true to the values the EU advocates as well as its role as promoter of democracy in the region and does not water down the demands expressed by the European Parliament directly elected by more than 507 million EU citizens.