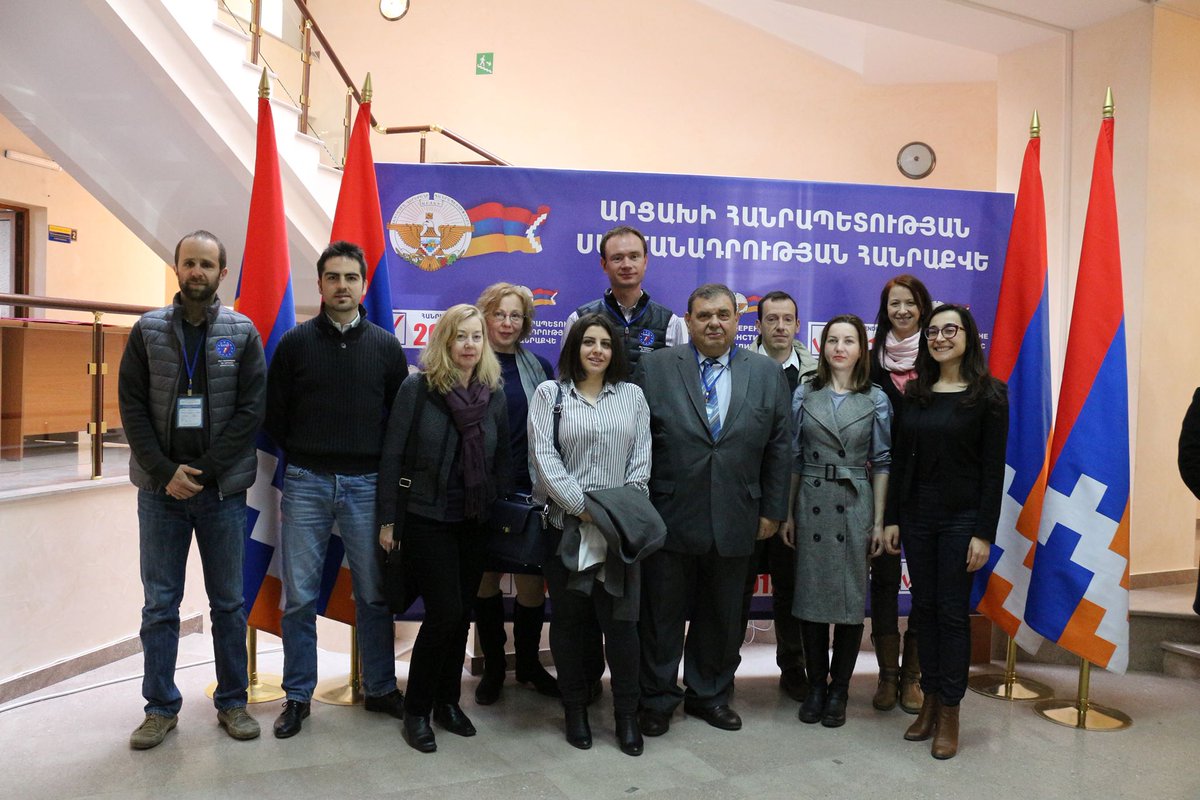 Stepenakert, 22 February, 2017: The Referendum on the draft Constitution of Artsakh Republic took place on Monday, February 20th, 2017. According the Central Electoral Commission’s announcement, 87.6% (69,540 votes) of citizens voted in favor of the drafted constitutional amendments, 9.7% (7,686 votes) opposed. The invalid percentage of votes was 2.8% (2,202 votes). 76.44% of eligible voters participated in the referendum.

The European Armenian Federation for Justice and Democracy (EAFJD) deployed a mission of eight professional, highly experienced independent observers from Spain, the United Kingdom, Slovakia, Romania, Latvia, and Slovenia to observe the Referendum.

The short-term observers who visited 48 polling precincts in all eleven constituencies reported transparent, well-organized and orderly electoral process. The isolated cases of irregularities did not influence the general outcome of the Referendum.

After the observation, the four deployed teams presented positive reports about the electoral procedures. They mentioned the high level of awareness of the population about the voting procedures, as well as the competence and professionalism of commission members referring to the majority of the precincts.

The electoral procedures were in general executed in an efficient way and in correspondence with the electoral law, despite several irregularities connected to non-competent actions of some commission members.

Kaspar Karampetian, European Armenian Federation’s President said “This is already the second short-term observation mission that is deployed by our organization to follow the electoral process in Nagorno Karabakh, the first being the Parliamentary Elections of May 2015.

This time, again, for the referendum on Artsakh constitution we had deployed a team of eight independent observers, as we believe observation of electoral processes are part of establishing a democracy. The OSCE/ODIHR, EU, and other international organizations should also deploy teams of official observers, as such observations contribute greatly to the democratic process of every state, whether it is recognized or not.

Moreover, it is another step towards breaking the isolation of Artsakh imposed by the Azerbaijani government. We are glad to receive very positive feedback from independent STOs about transparent and free Referendum in accordance with international standards”, concluded Mr. Karampetian.

The observers also met the President of the Republic, Mr. Bako Sahakyan, Minister of Foreign Affairs, Mr. Karen Mirzoyan, as well as Artsakh civil society organizations, where they were familiarized with the realities facing the young Republic.

Peaceful, transparent and well-organized Referendum Day on the Draft Constitution of Artsakh Republic on 20th February, 2017 is reported in Nagorno Karabakh – Artsakh by independent international observation mission deployed by the European Armenian Federation for Justice and Democracy (EAFJD).

All the observers of the mission concluded that in general the electoral authorities succeeded in organizing a well-run and orderly Referendum Day in a professional and transparent manner. Overall the Referendum fulfilled the criteria enshrined in the International Covenant on Civil and Political Rights (ICCPR) and OSCE 1990 Copenhagen Document and other fundamental documents used to measure the state of democracy in established states.

The eight experienced observers of the international referendum observation mission deployed by EAFJD visited 48 polling precincts out of 280 in all 11 constituencies. All teams reported transparent, calm and orderly implementation of the referendum electoral processes with a high turnout of 76,4%. However, several minor irregularities were observed including presence of unauthorized security forces in 3 precincts, failure to fully follow counting procedures in one precinct, two cases of two ballots folded together in one precinct raising concerns as whether voting procedures were fully followed and polling staff allowing one domestic observer to give indications on the voting procedure.

According EAFJD observers, these irregularities did not influence the outcome of the Referendum.

• Referendum Management: The electoral authorities conducted the voting successfully without major irregularities. The Central Referendum Commission was highly cooperative and used electronic means to communicate up-to-date information. The Central Referendum Commission had also prepared manuals for its staff, for the political parties and international observers. The commission members in precincts and in three districts observed were overwhelmingly knowledgeable, adhered to the corresponding legal framework and managed the process efficiently.
• Legal framework: The Referendum was held under the he Electoral Code adopted on 29 October 2014 and the Law of the Nagorno Karabakh Republic on Referendum amended on March 12, 2010 which provide a solid framework for the conduct of genuine democratic elections.
• Campaign environment: Due to its short-term character, the international observation mission deployed by EAFJD did not observe the campaign. According to the Central Referendum Commission the campaign took place in an overwhelmingly calm and respectful atmosphere. No complaints were filed.

Opening:
• Opening was observed in 4 constituencies, including two urban (50%) and two rural (50%), all of which opened without any delay;
• The opening procedures were fully followed in three observed polling stations. In one polling precinct (25%) out of the four observed, the demonstration of the empty ballot box did not adhere to regulations.
• The polling staff appeared mostly knowledgeable and well prepared. The environment was calm and the process was transparent;
• No official complaints were filed during the opening;
• In all 4 polling stations neither international observers nor party/candidate representatives encountered hindrance to observe the process;
• In 2 cases the chairpersons of the polling stations observed were female (50%) and in 2 cases male (50%);
• Representatives of political parties were present in one polling precinct observed (25%).

• Closing was observed in 4 constituencies, 2 of which (50%) were rural and 2 (50%) were urban. The polling stations observed closed without delay;
• The closing and counting procedures were fully followed in 3 polling precincts (75%) and were not adhered to at all in one precinct (25%): these procedures comprise emptying of the ballot box, ballot sorting, ballot counting, completion of protocols and posting results. The procedure of recounting ballots was fully adhered to in 2 precincts (50%) and were not adhered to at all in the other 2 (50%).
• In one of the precinct the process of closing and counting was chaotic, although the intention was not to fabricate rigged results. On another occasion two ballots folded together were found in one ballot box, which suggests an irregularity, since every person should get one ballot and cast only one vote.
• The polling staff appeared mostly knowledgeable and well-prepared, the environment was mostly calm, transparent and well. In one of the observed cases lack of efficiency was noted;
• No significant violation of legal framework was observed in the closing procedures in the polling stations observed;
• In 3 polling stations neither international observers nor party/candidate representatives encountered hindrance to observe the process; in one polling station, it was not observed.
• In 3 cases (75%) the chairperson of the polling stations observed were male and in 1 (25%) female;
• Representatives of political parties and candidates were present in one polling station observed.

• Aggregation was observed in 3 districts;
• The overall assessment of the aggregation, voting environment and district commission performance was very good in 2 districts (67%) and reasonable (33%) in one district.