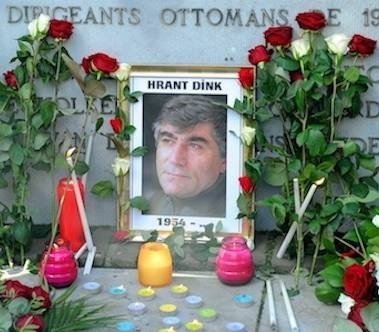 A commemoration ceremony of the assassination of Hrant Dink took place on Sunday 19 January 2014 in Brussels, in front of the Monument dedicated to the victims of the Armenian Genocide.

During the ceremony, the representatives of the Association of the Armenian Democrats in Belgium, Khatchig Demirji and Bogos Yalim, as well as the president of the Kurdish organization Kongra-Gel Remzi Kartal and the editor in chief of Info-Turk Dogan Özgüden, a longstanding defender of the rights of the Armenian people, condemned the assassination, accusing the Turkish state as the organizer of the murder. A delegation of the European Armenian Federation for Justice and Democracy (EAFJD) and Armenian National Committee of Belgium (ANC) was present at the commemoration ceremony.