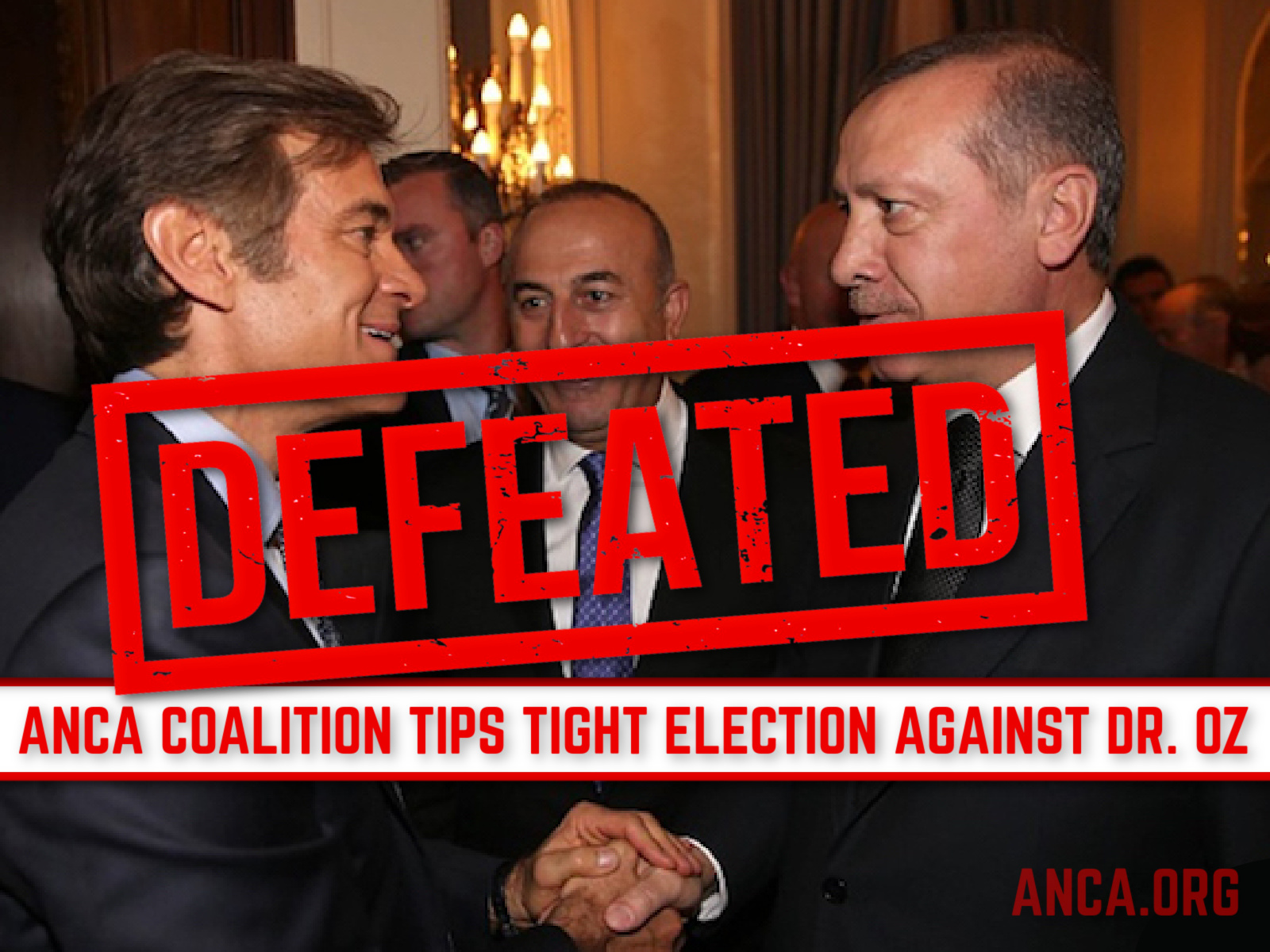 The Armenian National Committee of America (ANCA), leading a diverse coalition of Armenian, Greek, Jewish, Kurdish, and other allied Americans, tipped the scales this evening against the election of Dr. Mehmet Oz – an ally of Turkish dictator Recep Erdogan who denies the Armenian Genocide – to the U.S. Senate from Pennsylvania.

“With this historic win, the ANCA protected the U.S. Senate, the people of Pennsylvania, and our American democracy from an Armenian Genocide denier with deep ties to Turkey’s hostile Erdogan regime,” said ANCA Chairman Raffi Hamparian. “This landmark victory was the result of more than a year of strategic planning and relentless community and coalition efforts – ranging from opposition research, voter-education, media outreach, get-out-the-vote, and other targeted electoral initiatives.  We are gratified by Dr. Oz’s defeat and look forward to working with ANCA-endorsed candidate, Lt. Governor John Fetterman for many years to come.”

The ANCA national office, along with its Eastern Region and Pennsylvania local affiliates, teamed up with the Hellenic American Leadership Council (HALC) to run a grassroots campaign calling attention to Dr. Oz’s genocide denial and close ties with Turkey’s Erdogan regime.

In the weeks leading up to November 8th vote, the ANCA’s anti-Oz coalition led a series of protests in Pennsylvania and California, sounding alarm bells about Dr. Oz’s ties to the Turkish Government and his persistent refusal to recognize the Armenian Genocide. Following a protest in front of Dr. Oz’s abandoned campaign headquarters, ANC of Pennsylvania Co-Chair Lorig Baronian told the Philadelphia Inquirer, “Genocide denial has no place in the U.S. This should be against our morality and ethics as a nation. Finally, after 100-plus years, we had both chambers of U.S. Congress and President Biden affirm the reality of this atrocity. And now we have a candidate running for U.S. Senate who can’t even utter the words.”

In an op/ed in the Jerusalem Post, Rabbi Shmuley Boteach – “America’s Rabbi,” – who leads the World Values Network – and ANCA Executive Director Aram Hamparian jointly asked, “Will Dr. Mehmet Oz, a citizen of Turkey with reported ties to Turkish President Tayyip Recep Erdogan, clearly state that the Armenian Genocide occurred? The question is more than reasonable. It is essential in understanding the values he would bring to Congress.”

These concerns were spotlighted in news coverage by NBC News, the New York Post, Forbes, Daily Wire, Daily Caller, Breitbart, Washington Times, and Philadelphia Inquirer, among others.  A video spotlighting Dr. Oz’s Armenian Genocide denial – posted by the ANCA and HALC and produced by the Really American PAC – went viral with over 1.8 million views on Twitter. The ANCA has also called for a US Department of Justice investigation into whether Oz may be in violation of the Foreign Agent Registration Act (FARA) of 1938 for his endorsement agreement with Istanbul-based Turkish Airlines, through which Oz provides “consulting services, certain media, and in-flight film appearances.”

The ANCA-endorsed Pennsylvania Senator-Elect John Fetterman after he issued a series of statements outlining his support for Armenian Genocide affirmation and education as well as a broad range of Armenian and Greek American concerns. Lt. Governor Fetterman stated:

— “I also support the NDAA Amendment adopted in the House (Pappas Amendment) and introduced in the Senate (Menendez Amendment). With regard to Greece & Cyprus, Sen. Menendez’s two pieces of landmark legislation that have passed into law – the Eastern Mediterranean Security and Energy Partnership Act of 2019 and the US-Greece Defense and Interparliamentary Partnership Act of 2022 – promote U.S. interests and values. I support the continued and full implementation of Senator Menendez’s legislation.”
The U.S. Senate unanimously recognized the Armenian Genocide in December, 2019, following near-unanimous reaffirmation of the crime by the U.S. House just weeks prior.  President Joe Biden officially recognized the Armenian Genocide on April 24, 2021, ending the longest-running gag rule on proper U.S. commemoration of this crime.  Pennsylvania first recognized the Armenian Genocide in a proclamation issued by Governor William W. Scranton on April 24, 1965.