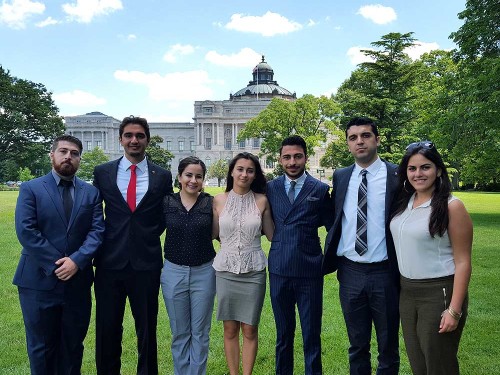 DC: A Look Back at the 2015 ANCA Leo Sarkisian Summer Internship

When you have no idea what an experience will have in store for you, you hope for an adventure. Sure we knew that we would be working on projects, participating in lectures and Congressional meetings, but I can confidently say that all of this summer’s ANCA Leo Sarkisian Internship (LSI) participants were still eagerly wondering what else we would learn. Quickly, what we found out is that any expectations that we had about familiarizing ourselves with the “ins and outs” of the city would be far exceeded by the life lessons learned. When ANCA Legislative Director Raffi Karakashian showed us our exit interview questions the last week of the program asking about our favorite lecture, our favorite trip to the Capitol or who we thought was the overall best intern, we looked at each other with inquisitive faces. Let’s just say, it was a tough choice.

When you’re sitting in a room full of eclectic interns that are just as eager to learn as you are, you feel more comfortable to actively listen and participate in discussions. The things we learned in the ANCA’s Aramian Conference room will follow us in whatever career path we choose. Whether the lecture was about career opportunities at the State Department given by Anthony Pahigian and Greg Aftandilian; professionalism by Ed Chaglassian; the effective use of social media by Carina Khanjian; how to lose your ambassadorship (for doing the right thing) by former US Ambassador to the U.S. John Evans; or, the importance of staying politically active by Mario Nalpatian — our curiosity and enthusiasm allowed us to swallow whole, without the need to chew, all this new information.

“One of the most beneficial aspects of the Leo Sarkisian Program was the lecture series we were fortunate to have. What immediately stood out to me was the fact that most of these lectures were given by former interns or close friends of the ANCA,” explained Fresno State alumna Denise Altounian. “Whether it was a lecture on the importance of professionalism in the workplace, how to write the perfect resume or simply hearing the journeys of their professional careers, each lecture provided invaluable insight for our intern group.” Altounian was one of two interns who were inspired to apply to the ANCA Hovig Apo Saghdejian Capital Gateway Program ( ANCA-CGP) after finishing the internship. “As recent or soon to be college graduates, some of the fears and questions of navigating the professional world were calmed after each presentation. I left Washington DC knowing I have a network of people who are more than willing to offer their time and advice on the professional journey I will soon embark on,” she explained.

Leaving the comfort of the ANCA office and getting to Capitol Hill, for the first time (for most of us), will remain fresh in my mind. Immediately, envy filled us; the reflection of the Capitol Building illuminated by the hot July sun twinkled in our eyes. However, this feeling was of passionate positivity and it drove the already boiling ambition in us. We wanted to be a part of it all; the glory, the behind the scenes, the changes and progress.

Meeting with members of the Congressional Armenian Caucus was humbling. The fact that they worked so hard to represent their constituents wholly was very inspiring. You find these genuine characteristic in few politicians. Each of us made sure to remind the representatives how truly appreciative we were for their work towards a stronger US-Armenia relationship – and the important work yet to be done. I was so excited to get to actually meet Members and their staff, who understand and value the ideals of self-determination and freedom for Karabakh or the importance of US condemning genocide – whenever and wherever it occurs . They were all truly inspirational people with amazing stories. Whether we met them outside of a Committee hearing, racing to the next event, or in their personal offices that matched their distinct personalities, the discussions were great and always lively. The insights of such US House members including Congressional Armenian Caucus Co-Chairmen Frank Pallone (D-NJ) and Robert Dold (R-IL), Armenian American Congresswomen Anna Eshoo (D-CA) and Jackie Speier (D-CA), and Representatives David Cicilline (D-RI), David Valadeo (R-CA), Dave Trott (R-MI), and Adam Schiff (D-CA) are engrained in our minds as role models we wish to be like someday. We even had the convenient opportunity to sing “Happy Birthday” (in Armenian) to Representative Schiff in his office (and we have the video to prove it – https://youtu.be/aMeaOZn-EVQ)!

Capitol Hill was not only exciting for those of us that study Political Science in our respective colleges but also those of us that really got see how DC fosters everyone’s needs. CSUN graduate and History major, Dickran Khodanian explained that “The ANCA Leo Sarkisian Internship provided us with visits to several important institutions around Washington D.C. including, the Capitol, the State Department, the National Archives, and particularly the Library of Congress. “The Library of Congress – and our meeting with Armenia and Georgia Area Specialist, Dr. Levon Avdoyan – opened my eyes to a series of documents and materials about Armenian history that I was never exposed to, and new research avenues to advance my studies Khodanian extended his time in DC with an internship at the Library of Congress, while participating in the ANCA CGP.

Outside the Office and Off the Hill:

We realized very quickly that being in Washington, DC, we are surrounded by all sorts of lectures and talks at embassies and think tanks that we could take advantage of. At the start of every week, we would huddle around one person’s computer looking at the list of that week’s events if an invitation had not been already sent to us by one of the ANCA staff. We went to talks about “Rival Gas Pipelines for Europe” at the Institute for World Politics (IWP); “The Future of Egypt” at the Hudson Institute; “Solving for Y: Exploring Opportunities for the Next Generation” hosted by Politico and featuring remarks by former House Speaker Newt Gingrich; “Considerations and Constraints for U.S., EU, and Turkish Engagement in the South Caucasus” at the Brookings Institute, amongst others.

Most people describe DC as a politically active city in a figurative sense, but we quickly realized how literally it is active, with the protests we participated in. We learned about the importance of timing, coalition building and political pragmatism. Our own, Patrick Babajanian explained, “One of the parts of the internship I enjoyed the most was getting to visit the Armenian Embassy and participating in protests outside those of Turkey and Azerbaijan regarding different issues. It was great to see us organize like that and show the public the active role that we play in American political life. I’m so glad that I was granted the opportunity to take part in the program with everyone I met this summer and I know that I’ll always cherish it as one of the best experiences I’ve had so far. On to the next adventure.”

We were so eager to get to some of the events such as Secretary of State John Kerry’s testimony regarding the Iran Deal before the House Foreign Affairs Committee — a packed room for which we woke up at 4 AM to stand in line to ensure access. Erik Khzmalyan describes, “I made a lot of memories throughout my stay here in Washington DC: the kind of memories that will accompany me for the rest of my life. I particularly remember the morning when we woke up at really early to watch the majestic sunrise from Lincoln Memorial. Then we headed to the Hill three hours before the start time to ensure we would be able to hear Secretary Kerry’s testimony before House Foreign Affairs Committee. As aspiring politicians we were all thrilled to be present in such a spectacular and high-profile event.”

At Home and on the Streets:

What adds to this amazing experience is interacting with the other interns not only on a professional level but a personal level. Living with six other adults really broadened our horizons, for seven heads think better than one. This allowed us to explore DC on a more personal level as well. We got see outside of the political box that DC is often put into and see the jazz scene, the museums, the restaurants and fairs amongst other things.

This July 4th was one for the books; the sunset was followed by an amazing view of the fireworks from the Lincoln Memorial. Not to mention the giant adult sized ball pit at the National Museum of Buildings that we went to as a group, twice. We explored the city by kayaking on the Potomac at the Georgetown waterfront. Getting to meet more Armenian interns from former LSI years, CGP alums and this year’s Armenian Assembly interns really made the time fly by during our stay in DC. Arevig Afarian put it all into perspective. “Before coming to Washington, DC, for some reason I was convinced that my relationship with my fellow interns was not going to be anything more than professional,” said Afarian. “I have never been so pleased to be so wrong. One of the most memorable moments we had as a group is when we went to the ball pit (“The Beach”) and we spent an hour throwing balls at each other. We also got into a couple of battles with complete strangers. That is also the day Ripsime Biyazyan figured out that the best way eliminate wars and ensure peace, all political meetings should be held in a ball pit.”

At the end of this internship, we all knew that whatever we left with, we would inspired to do more for our Cause – each in our own way. Some stayed in DC.; most have gone back to our normal lives in Minnesota, in Los Angeles, or in Canada, because that’s what people do; they learn, the grow and then start the cycle over again. With our first goodbye of the group, Shaunt Tchakmak proudly summed up what all of us were thinking. “Politically active youth are rare to come by. Politically active youth fighting for the Armenian Cause are even more rare. This summer I had the honour and privilege to spend my time with 6 other politically active youth fighting for the Armenian Cause. These individuals have inspired me beyond belief and I leave Washington DC as a proud LSI alumni.”

The 2016 session of the Leo Sarkisian Internship Program runs from June 20th to August 12th. ANCA LSI applications are due March 1, 2016.