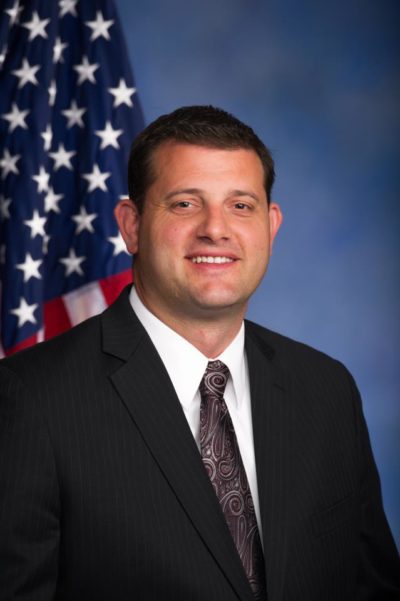 LOS ANGELES—The Armenian National Committee of America – Western Region announced that it will bestow its 2017 Advocate for Justice Award to Congressman David Valadao in honor of his most recent efforts to bring attention to the plight of Armenians in Artsakh, as well as his consistent leadership on issues important to the Armenian-American community. Congressman Valadao will personally accept the award at the organization’s Annual Gala to be held on October 8th at the Beverly Hilton Hotel in Beverly Hills, California.

“As Co-Chair of the Armenian Caucus in Congress and elected representative of a vibrant and deep rooted Diasporan Armenian-American community in California’s Central Valley, Congressman David Valadao has taken a leadership role particularly in promoting peace and prosperity for the people of Artsakh. He worked closely with his colleagues in Congress to introduce and pass his amendment securing direct funding to complete life-saving de-mining efforts in Artsakh, and his recent travel to Armenia and Artsakh set the stage not only for other members of Congress to witness first-hand the pride and passion of the Armenian People living in the homeland but also to promote the ongoing mutually beneficial relationship between the US and Armenia and Artsakh,” stated ANCA-WR Chair Nora Hovsepian.

Congressman Valadao, a Republican, was elected to the California State Assembly in 2010. In 2012, he sought and won the race to represent the constituents of California’s 21st Congressional District in the U.S. House of Representatives. He was reelected for his second term in November 2014. Most recently, in November 2016, Valadao was elected to serve a third term in the United States House of Representatives. Congressman Valadao is a member of the influential House Appropriations Committee, which is the committee responsible for funding the federal government and determining where American tax dollars are spent.

While serving on the House Appropriations Committee, Congressman Valadao is working with the Armenian National Committee of America (ANCA) to safeguard U.S. aid to de-mine the Republic of Artsakh. Congressman Valadao, who serves as a Co-Chair of the Congressional Armenian Caucus, has been a leading voice in the U.S. House behind bipartisan efforts to ensure that the 2018 Fiscal Year foreign aid bill prioritizes continued support for the HALO Trust, a non-governmental organization that has, since 2006, destroyed 8,733 anti-personnel landmines, 2,584 anti-tank landmines, 180,858 small arms ammunitions, 12,423 cluster bombs and 48,572 other explosives.

Congressman Valadao introduced an amendment backing continued Congressional appropriations for the HALO Trust’s life-saving de-mining across the interior farmlands and villages of the Artsakh Republic. The Valadao Amendment was approved by voice vote, as part of the FY 2018 foreign aid appropriation, which, in turn, is part of a broader spending measure (H.R. 3354), approved on September 14th. The pivotal move was hailed by the ANCA which spearheaded the launch of Artsakh aid in the 1990s, securing tens of millions of dollars in life-saving U.S. assistance to the independent republic.

Earlier this week, Congressman Valadao visited Artsakh, where, alongside government officials and ANCA Chairman Raffi Hamparian, he personally observed the HALO Trust de-mining programs that he helped to fund. During his meeting with the HALO Trust’s Regional Director Ash Boddy and local leaders, Congressman Valadao saw first-hand the lifesaving efforts of the organization.

The Valadao family emigrated from the Azores Islands of Portugal to the United States in 1969. After settling in the Central Valley, Valadao’s father started a small dairy farm in the Central Valley in 1973. Valadao was born and raised in Hanford, California in the center of the agriculturally rich 21st Congressional District. As a lifelong resident of the Central Valley, he has been active in agriculture and dairy industry groups, as well as many local causes including Children’s Hospital Central California, 4-H, Future Farmers of America, and various Catholic charities.

Valadao attended local schools, graduating from Hanford High School in 1995 and later attended the College of the Sequoias in Visalia. He is currently a partner at Valadao Dairy and Triple V Dairy. Valadao married his high school sweetheart, Terra, in 1999. Together, they have three beautiful children.

The 2017 ANCA WR Annual Gala Banquet will be held on Sunday, October 8, 2017 at the Beverly Hilton Hotel in Beverly Hills, California. The main event will begin at 4:30p.m. with cocktails, hors d’oeuvres, and a silent auction. A three-course dinner will follow at 6:00 p.m. with a powerful program and presentation of the awards.

Individuals interested in attending and sponsoring the Annual Gala Banquet are encouraged to purchase tickets online at www.ancawr.org/gala or call (818) 500-1918.

The ANCA-WR Gala Banquet represents the single largest annual gathering of Armenian American public policy leaders throughout the western United States, and is attended by over 1,000 prominent Members of Congress, state legislators and officials, community leaders, and many of the organization’s strongest activists and generous donors from California, Nevada, Arizona, Colorado, Washington and throughout the western United States.