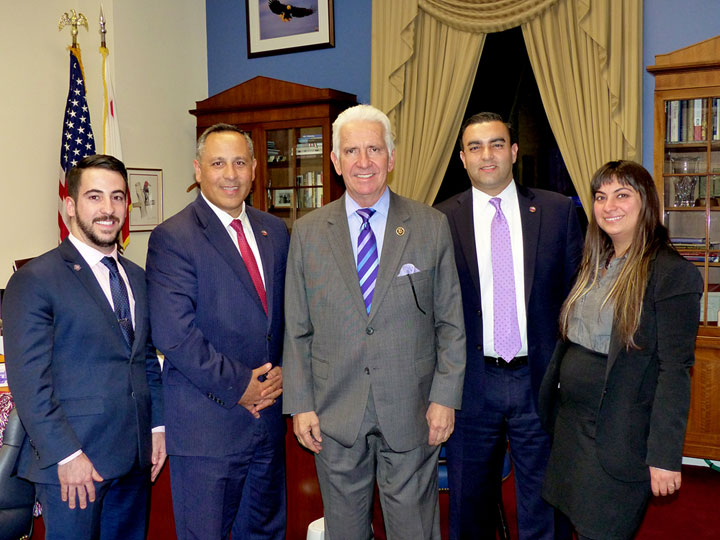 — Fresno Legislator has Three Program Veterans on his Staff

Launched in 2003, the program helps secure permanent employment and other professional opportunities in Washington, DC for young Armenian American professionals and recent graduates. The program was named after Hovig Apo Saghdejian, a beloved young community leader from the Central Valley, who lost his life, as a young man, in a tragic car accident in 2005. His eternal memory continues to inspire new generations of Armenian Americans. His family generously established the Hovig Apo Saghdejian Memorial Fund in his memory and, over the past decade, have played a vital role in the expansion of this innovative program.

Through the years, the ANCA has developed a broad array of relationships in and around Capitol Hill and remains alert to new professional opportunities across the Washington, DC political, policymaking, and media landscapes. The CGP utilizes these resources and contacts to help candidates identify and secure jobs that fit their interests and needs. Tadeh Issakhanian and Alexa Fox of Congressman Costa’s Washington DC office and Denise Altounian of his Fresno office, each with roots in the Central Valley, are alumni of the program, which has, to date, helped well over 200 recent graduates and students explore career opportunities.

“The ANCA of Central California is proud of Congressman Costa for so many reasons,” remarked ANCA of Central California’s Sevag Tateosian. “The Congressman is a great supporter of the Armenian Cause, who encourages and empowers Americans of Armenian descent to give back to America through public service. We deeply appreciate that our ‘A+’ Congressman has given so many young Armenian Americans from the Central Valley a chance to grow, learn and succeed on Capitol Hill,” added Tateosian.

For decades, since his election to the California State Assembly in 1978, the ANCA of Central California has maintained a positive and active relationship with Congressman Costa. Since his election to the U.S. House in 2004, Congressman Costa has consistently received a Congressional Grade of ‘A+’ from the ANCA as well as its biannual endorsement. The Congressman, who visited the Republic of Armenia in 2016, discussed his commitment on a wide range of Armenian American priorities in a shared dialogue he recently held on Capitol Hill with ANCA Chairman Raffi Hamparian.

Congressman Costa represents California’s 16th Congressional District – which is home to thousands of Armenian Americans – many of whom trace their roots in the Fresno, California area back to the late 19th century and early 20th century. Located in California’s San Joaquin Valley, the 16th District includes all of Merced County, as well as parts of Fresno and Madera Counties. Rich with agricultural products like grapes, almonds, cotton, dairy and beef, all three of the district’s counties rank in the top agriculture-producing counties in America. The district includes Fresno, Merced, Madera, Los Banos, Atwater, Chowchilla, Gustine, and Hilmar among others.

Program fellows are housed at the ANCA’s Aramian House, located in the heart of Washington, DC in the Dupont Circle neighborhood, just blocks from the ANCA offices. ANCA Program Director Tereza Yerimyan and the Capital Gateway Program Advisory Committee (CGPAC) coordinate a series of career placement workshops on a range of issues including resume and cover letter preparation, effective interview strategies and networking. The CGPAC also connects fellows with mentors most closely aligned with their career goals for one-on-one advice and encouragement.

For university students interested in a quarter/semester in Washington, DC, the ANCA CGP can assist with internship guidance and placements both at the ANCA headquarters and other public policy and government institutions. Students are offered up to three months of free housing at The Aramian House depending on space availability and along with assistance to ensure they meet their university program obligations.

In addition to the Saghdejian family, substantial support has also been provided by the Cafesdjian Foundation; ANCA benefactors Dr. Vahakn Shahinian and the Shahinian Family; Mr. and Mrs. Frank and Barbara Hekimian; and, the Armenian American Veterans Post of Milford, Massachusetts (AAVO).

Additional information about the ANCA Hovig Apo Saghdejian Capital Gateway Program is available at anca.org/gateway or by emailing gateway@anca.org.