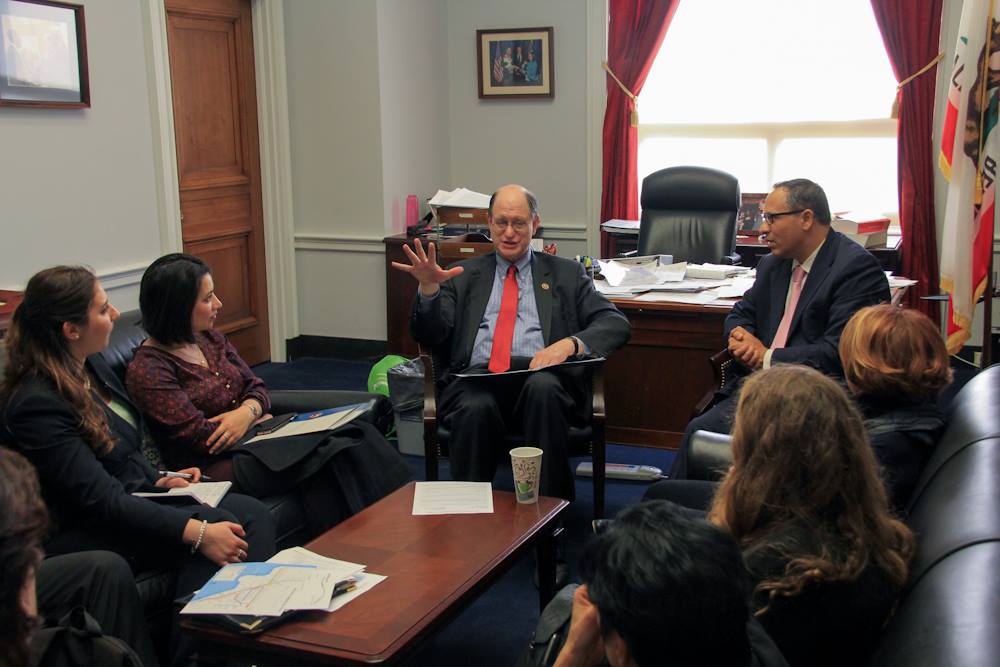 WASHINGTON, DC — Congressman Brad Sherman (D-CA), a senior member of the House Foreign Affairs Committee, has, in the past week, pressed several Obama Administration officials – including Treasury Secretary Jacob Lew and USAID Administrator Gayle Smith – for answer about proposed cuts in aid to Artsakh, foot-dragging on a U.S.-Armenia Double Tax Treaty, and the level of support being provided to help Armenia support refugees from Syria, reported the Armenian National Committee of America (ANCA).

In a U.S. House Financial Services Committee hearing earlier today, Rep. Sherman cited the importance of a U.S.-Armenia Tax treaty to build upon ongoing U.S. assistance to Armenia, and pressed for the negotiation of such an accord. Responding to Secretary Lew’s assertion that there there is no need for a Double Tax Treaty with Armenia, Rep. Sherman described the situation as a “chicken and egg” scenario, stating, “You don’t get the business investment, because you don’t have the tax treaty. Then you don’t need the tax treaty because you don’t have the business investment. Given that this Congress has provided well over a billion dollars in aid to Armenia, it would be seem that having one member of your staff to achieve the same objectives would be appropriate.” Rep. Sherman and Secretary Lew agreed to work together to review the matter.

Video from Rep. Sherman’s exchange with Secretary Lew is available on the ANCA YouTube page at: https://youtu.be/GZm9OK2KoXk

“The ANCA thanks Representative Sherman for pressing Secretary Lew about the lack of a U.S.-Armenia Double Tax Treaty, and, more broadly, for his consistently principled and powerful leadership in supporting the views and values of Americans of Armenian heritage and all friends of Armenia,” said ANCA Executive Director Aram Hamparian. “We echo the points he raised today and join with him in working to remove a key barrier to the growth of U.S.-Armenia trade and investment. A Double Tax Treaty would strengthen our bilateral economic relationship, reinforce the longstanding bonds of friendship between the American and Armenian peoples, foster economic growth and opportunity in both nations, and provide Armenia with greater strategic options in dealing with regional powers.”

Calls from Congress and the business sector continue to grow with Triada Studio and PicsArt recently joining global business leaders Microsoft, FedEx, NASDAQ, Marriott, Grant Thornton, and others that have been on record for years supporting stronger bilateral economic relations efforts, including through a Trade and Investment Framework Agreement (TIFA), which was adopted in May 2015, and a modern Double Tax treaty.

U.S. Representatives Judy Chu (D-Calif.) and Ted Lieu (D-Calif.) have appealed to Lew to begin negotiations for a new double tax treaty to address these concerns.

Video from the exchange with Administrator Smith is available on the ANCA YouTube Channel at: https://youtu.be/SpETZb9RNc4

“We want to thank Congressman Brad Sherman for questioning USAID Administrator Gayle Smith about diminishing aid levels to Nagorno Karabakh and encouraging her to continue to advance the cause of peace and meet pressing humanitarian needs through this assistance program.”

“Representative Sherman’s pioneering ‘Sherman Amendment’ back in 1997 put in motion Congressional support for a direct U.S. aid program that has, since then, provided tens of millions of dollars in humanitarian assistance to Nagorno Karabakh. He continues to be a forceful leader for this crucial investment in peace, and a thoughtful advocate for all our community’s priorities, including aid to Syrian Armenians and targeted support for Samtskhe-Javakheti.”

Rep. Sherman joined over 30 of his colleagues this week in cosigning a letter to U.S. House appropriators highlighting these Armenia and Artsakh foreign aid priorities. Last week, Rep. Sherman met with ANCA national and regional board members and constituents about both Double Tax Treaty related issues and Armenia foreign aid priorities during the ANCA national advocacy Fly-In for Peace, Prosperity and Justice.

Participating in the ANCA Fly-In was Vardan Tadevosyan, the Director of the Lady Cox Rehabilitation Center in Stepanakert, Karabakh, who shared the urgency of U.S. assistance to help the expansion of the facility to meet the needs of disabled adults and children throughout the region. The ANCA has listed the Lady Cox Rehabilitation Center as among its top Artsakh aid priorities in Congressional testimony submitted to both the House and Senate.

The ANCA’s testimony to the House is available at:
http://anca.org/assets/graphics/2016/ANCA_FY2017_House_ForeignOps_Testimony.pdf

The complete list of ANCA FY2017 foreign aid priorities is outlined at:
https://anca.org/press-release/u-s-funding-for-nagorno-karabakh-rehabilitation-center-among-anca-fy17-foreign-aid-priorities/

Photo: ANCA National and Regional Board Members and constituents meet with Rep. Brad Sherman (D-CA) during the ANCA Fly-In for Peace, Prosperity and Justice on March 15/16