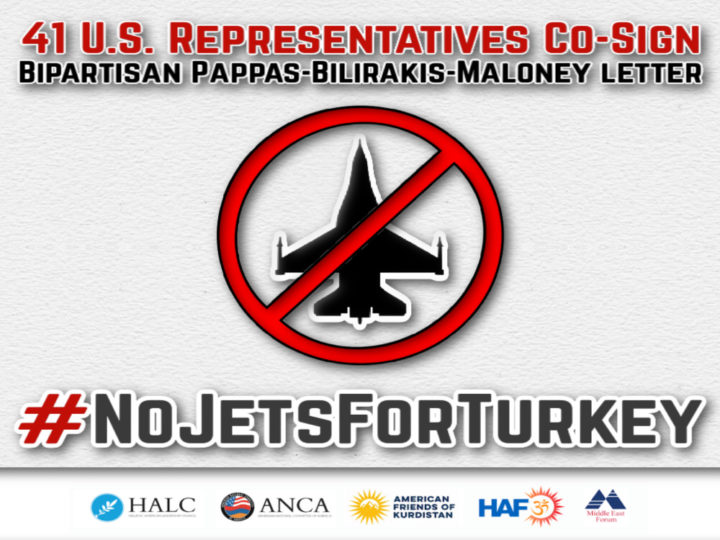 The Pappas-Maloney-Bilirakis letter received broad-based support from a coalition of ethnic, faith, and civic groups that worked successfully with Senate and House leaders to block an earlier sale of F-35’s to Turkey, and also encouraged U.S. sanctions on the Erdogan regime under the Countering America’s Adversaries Through Sanctions Act (CAATSA). The coalition includes the Hellenic American Leadership Council, ANCA, American Friends of Kurdistan, the Hindu American Foundation, and the Middle East Forum. Among the other groups opposing the F-16 sale are the American Jewish Committee, PSEKA, American Hellenic Institute, Coordinated Effort of Hellenes, and the Armenian Council of America.

“Along with all our coalition partners, we want to thank Congressman Pappas for his principled leadership and also to express our sincere appreciation to Congressman Bilirakis, Congresswoman Maloney, and all the U.S. Representatives who joined in this bipartisan initiative to protect our U.S. national interests by blocking a reckless sale of U.S. F-16 fighters to the increasingly hostile and openly anti-American Erdogan regime,” said ANCA Executive Director Aram Hamparian.

The bipartisan Pappas-Maloney-Bilirakis letter expresses concern about the sale of F-16s and 80 modernization kits, noting security risks associated with the sale and arguing that by Erdogan’s own words, Turkey has shown no intention of coming into compliance with U.S. law. “We share your goal of a Turkey that is rooted to the West, but we will not achieve that goal if the Erdogan government escapes accountability for violating U.S. law and the standards of the NATO alliance,” argue the Representatives. The House members are requesting “a formal notification of any Turkish Letter of Request (LOR), the specifics of such an LOR, the Administration’s position on such an LOR, and responses to our specific objections.”

“Turkey’s illegal and unfettered actions are indicative of President Erdogan’s transformation of Turkey to a rogue state led by a leader with a nationalistic philosophy, Neo-Ottoman ambitions, and a complete disregard for following international law,” explained Rep. Bilirakis. “Erdogan continues to violate American law (the Countering American Adversaries through Sanctions Act, or CAATSA), which alone makes Turkey ineligible for new F16s. But beyond his violation of CAATSA, he also acts contrary to American interests, with his dangerous behavior contributing to the instability of the region. For all these reasons, we absolutely should not sell Turkey F-16s.”

“As Co-Chair of the Congressional Caucus on Hellenic Issues, I am proud to join Rep. Pappas in opposing any transfer of such advanced and sensitive military equipment to Turkey,” said Rep. Maloney. “Turkey’s purchase and use of Russian S-400 missile systems in defiance of NATO standards and U.S. law, decades-long violations of the Republic of Cyprus’ sovereignty, and increasingly destabilizing behavior in the Eastern Mediterranean and West Asia clearly demonstrate that sales of advanced U.S. military equipment like the F-16 and associated modernization kits must stop.”

In statement after statement issued to Rep. Pappas, civic coalition members expressed their concerns about the pending F-16’s sale.

“I would like to commend Representatives Pappas, Bilirakis and Maloney for leading their colleagues in asserting Congress’ role in U.S. foreign policy,” said Endy Zemenides, Executive Director, Hellenic American Leadership Council. “Congress forced the Trump Administration to do the right thing regarding Turkey and F35s, and now has to make sure no one in the Biden Administration tries to circumvent U.S. law and Congressional intent. Until Turkey decides to honor U.S. interests, U.S. values, and U.S. law, it should not get F-16s or any other American weapons.”

“Turkey’s request for modernized F-16s after being removed from the F-35 program shows that President Erdogan isn’t getting the message. It is President Erdogan’s behavior that needs to change, not the specific details of his request. The S-400 missile compromised vital technology associated with the F-35, which is what led to Turkey’s removal from the program. Modernized F-16s radar use similar technology to F-35s, and present similar risks in proximity to the S-400 missile. This is to say nothing of Turkey’s numerous other problems, such as its recent inclusion on the “gray list” for potential terror finance according to the Financial Action Task Force and numerous human rights abuses in Syria and against its own citizens,” said Cliff Smith, Washington Project Director of the Middle East Forum. “President Biden has repeatedly stressed that Turkey should improve its human rights record and return to acting like a NATO ally. But under Erdogan, Turkey hasn’t done so. Until that happens, the State Department shouldn’t consider the request. It would be unacceptable to rely on a loophole to sell these planes to Turkey.”

“Turkey has proven to be an unreliable ally and is in violation of numerous U.N. resolutions concerning the continued occupation of Cyprus,” said Philip Christopher, President of the International Coordinating Committee Justice for Cyprus (PSEKA). “It has jeopardized the security of the United States and NATO!”

“We welcome the leadership of Reps. Pappas, Bilirakis, Maloney, and all of the signatories of this important letter,” said Taniel Koushakjian, Director Of Government Relations & Policy, Hindu American Foundation. “The growing military relationship between Turkey and Pakistan is a real concern to millions of Americans who support upholding U.S. law and ensuring that sophisticated U.S. military components that are vital to our national security don’t end up in the wrong hands.”

“American Friends of Kurdistan applauds the members of Congress who have taken a just and critical stance on preventing Turkey from attaining additional F-16 fighter jets and upgrades,” said Diliman Abdulkader, Co-founder and Spokesperson of American Friends of Kurdistan. “The United States had saved many civilian lives when it removed Turkey from the F-35 program, the United States would be saving many more lives if it prevents Turkey from modernizing and expanding its current F-16 fleet. Turkey has done enough damage to the region with the weapons it already holds, and this step is decisive to keeping the region secure. The F-16s will undoubtedly be used against the Kurds across the region, we must do everything we can to prevent this.”

The full text of the Pappas-Maloney-Bilirakis letter is provided below.

We are writing with regards to the reported Letter of Request (LOR) to the United States by the Republic of Turkey in association with its attempt to buy 40 F-16 fighter jets and dozens of modernization kits for its existing warplanes.

As you know, in 2017 Congress adopted and the President signed into law the Countering American Adversaries Through Sanctions Act (CAATSA). While CAATSA was progressing, and despite the intent of Congress being abundantly clear, Turkey announced that it would purchase the S-400 surface-to-air missile defense system from Russia. Despite nearly three years of attempts to find a solution that would prevent Turkey from being in violation of CAATSA, Ankara persisted with its acquisition and activation of the Russian S-400s and CAATSA sanctions were imposed on Turkey.

Earlier this month it was reported that Turkey requested to purchase “40 Lockheed Martin-made F-16 fighter jets and nearly 80 modernization kits for its existing warplanes.” On October 17, Turkish President Erdogan told reporters that the United States “has proposed the sale of a batch of F-16 fighter jets” but the reported sale has yet to be confirmed.

We have noted that your Department has declined to answer questions about the LOR, citing policy of not commenting before Congress has been notified of the LOR. We believe that the widespread reporting on Turkey’s request, as well as President Erdogan’s own statements, provide us sufficient basis to declare our opposition to this potential sale.

There are many reasons for our opposition:

Less than one year since the imposition of these CAATSA sanctions, the Erdogan government has made it clear that it has no intention of coming into compliance with U.S. law or dealing with the underlying conditions that led to Turkey’s ejection from the F-35 program and Congressional holds on purchases of American weapons by Turkey. Indeed, just last month, President Erdogan declared his intention of purchasing additional S-400s.

During his confirmation hearing, President Biden’s nominee for Ambassador to Turkey, former Senator Jeff Flake, declared that Turkey should face additional CAATSA sanctions should it acquire additional Russian weapon systems and we agree. Since this appears to be the position of both the Administration and Congress, even considering Turkey’s LOR under the present circumstances sends the wrong signal to Turkey and gives it reason to doubt our resolve while continuing to develop its military relationship with Russia.

One of the reasons Congress insisted on Turkey’s ejection from the F-35 program was because of the significant risks associated with collocating S-400s and F-35s. Experts have noted that providing Turkey the Block 70 modernization kits poses similar collocation risks if Ankara continues to possess Russian S-400s. Since upgraded F-16s still play such a significant role for us and our reliable allies, that is a risk that we do not find acceptable.

Finally, given the CAATSA sanctions already imposed, we anticipate that such a sale could only be finalized via invoking technicalities – for example, by trying to sell the jets to an entity other than Turkey’s SSB, which has been sanctioned. Such an approach would have to be viewed as an inappropriate circumvention of the intent of Congress and would force us to consider additional legislation to restrict a potential purchase.

We share your goal of a Turkey that is rooted to the West, but we will not achieve that goal if the Erdogan government escapes accountability for violating U.S. law and the standards of the NATO alliance.

We request a formal notification of any Turkish LOR, the specifics of such an LOR, the Administration’s position on such an LOR, and responses to our specific objections. Thank you for your attention to this urgent matter, and we look forward to your response.