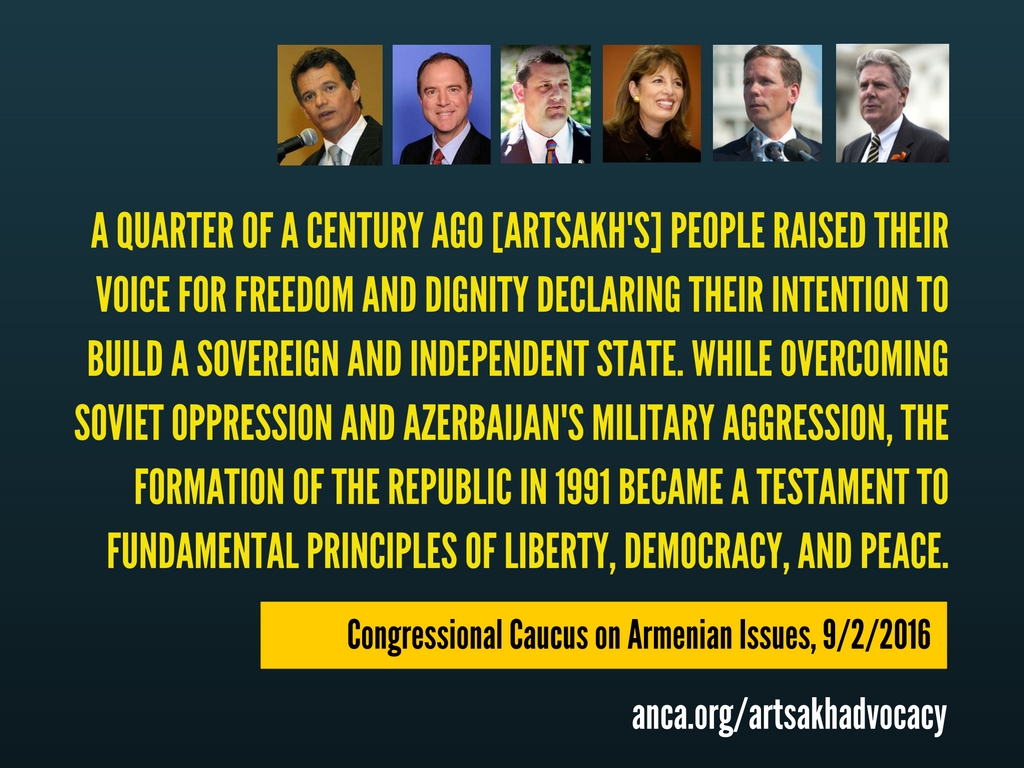 WASHINGTON, DC – Leaders of the Congressional Caucus on Armenian Issues praised the Republic of Nagorno Karabakh (Artsakh)’s commitment to democratic development and peace in celebration of the 25th anniversary of its independence, marked worldwide on September 2nd, reported the Armenian National Committee of America (ANCA).

“Armenian Americans across the U.S. appreciate the decades of Congressional Armenian Caucus leadership in support of the Nagorno Karabakh Republic and its people’s inalienable right to self-determination,” said ANCA Executive Director Aram Hamparian. “As we join together in marking the 25th anniversary of the Republic, we are reminded that Artsakh is a very American story – the victory of a free people over foreign rule. We look forward to working with Congress and the Administration to ensure continued U.S. assistance and leadership to attain a peaceful and lasting resolution which respects Artsakh’s right to freedom and security.”

Praising the Republic’s commitment to the “fundamental principles of liberty, democracy, and peace,” the Armenian Caucus leadership commended Artsakh for “consistently holding free and fair elections and your commitment to advance democratic governance and rule of law.”

The Congressional Caucus Co-Chairs noted they are “committed to the continued development of Artsakh’s economy and its democracy,” condemning “Azerbaijan’s most recent aggression in early April against the people of Artsakh that led to hundreds of military and civilian casualties.”

The letter concluded with a call for the formal international recognition of Artsakh Independence.

In a video message issued on the occasion of Artsakh’s 25th anniversary celebration, the ANCA’s Hamparian offered a “special tribute to those guarding the frontiers of Artsakh’s freedom and to all those building a better tomorrow, safe within the sacred borders defended by the brave sons and daughters of our ancient nation.”

“We must match their courage with our commitment; their sacrifice with our service; their valor with our vigor,” noted Hamparian, who called on all to do “our part, across our vast and vibrant diaspora – as a second army of the Armenian nation; as citizen advocates serving the sacred cause of Armenian liberty.”

To learn more about the ANCA’s ongoing advocacy efforts in support of Artsakh freedom, visit: http://anca.org/ArtsakhAdvocacy