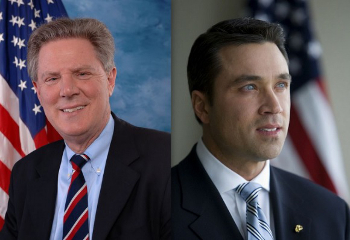 “Representatives Pallone and Grimm have been leading advocates on the full range of Armenian American community concerns on Capitol Hill—from justice to the Armenian Genocide, to support for Artsakh independence and the overall strengthening of the U.S.-Armenia relationship,” said ANCA Eastern Region Chairman Steve Mesrobian. “We’re honored to have them join us this evening—as they have so many times in our nation’s capitol.”

Congressman Pallone was a co-founder of the Congressional Armenian Caucus in 1995 with former Representative John Edward Porter (R-Ill.). Over the past 19 years, the Caucus has grown to over 150 members and worked closely with the ANCA in advancing key legislation on a broad range of topics. Rep. Grimm joined as Republican Co-Chair in 2013.

The Congressional Armenian Caucus Co-Chairs will be joined by renowned lawyer Robert Morgenthau and the Morgenthau Family, who will be honored with the prestigious ANCA Freedom Award for their decades-long efforts to raise the public’s consciousness on the atrocities of the Armenian Genocide. Near East Foundation Chairman Shant Mardirossian will be presenting the Freedom Award.

Community leader and humanitarian Dr. Garo Nazarian will serve as Master of Ceremonies. His Eminence Archbishop Oshagan Choloyan will open the ceremony with a prayer and a message of faith. Very Reverend Father Gabriel Adde of the Syriac Orthodox Church will deliver the benediction prayer.

During the course of the evening, world-renowned artist Kevork Mourad together with the famous violinist Sami Merdinian will perform a live exquisite “spontaneous painting” show at the banquet. Mourad will showcase three of his pieces, including the piece he will create live during the show, at the silent auction. He will be joined by Berge Zobian of Gallery Z who will feature paintings by other famous Armenian artists, including Armen Vahramian, Eduard Kharpetian, Alexander O. Grigorian, and others.
Armenia’s Permanent Representative to the United Nations Ambassador Zohrab Mnatsakanyan will be among the honored guests joining prominent members of the Armenian community present at the gala.

The Dec. 7 banquet, sponsored by the ANCA Eastern Region Endowment Fund, will begin with an elegant cocktail reception and silent auction at 4 p.m., followed by dinner and awards ceremony at 6 p.m. The event will take place in the heart of New York City at the prestigious Ritz-Carlton Battery Park Hotel, located at 2 West Street New York, NY 10004. Valet parking will be available at a reduced price of $35 per car. Additional information is available at: http://www.anca.org/erbanquet.

The ANCA Eastern Region Endowment Fund is a 501(c)(3) charitable and educational organization that supports the Armenian National Committee of America Eastern Region in outreach to Armenian American communities.