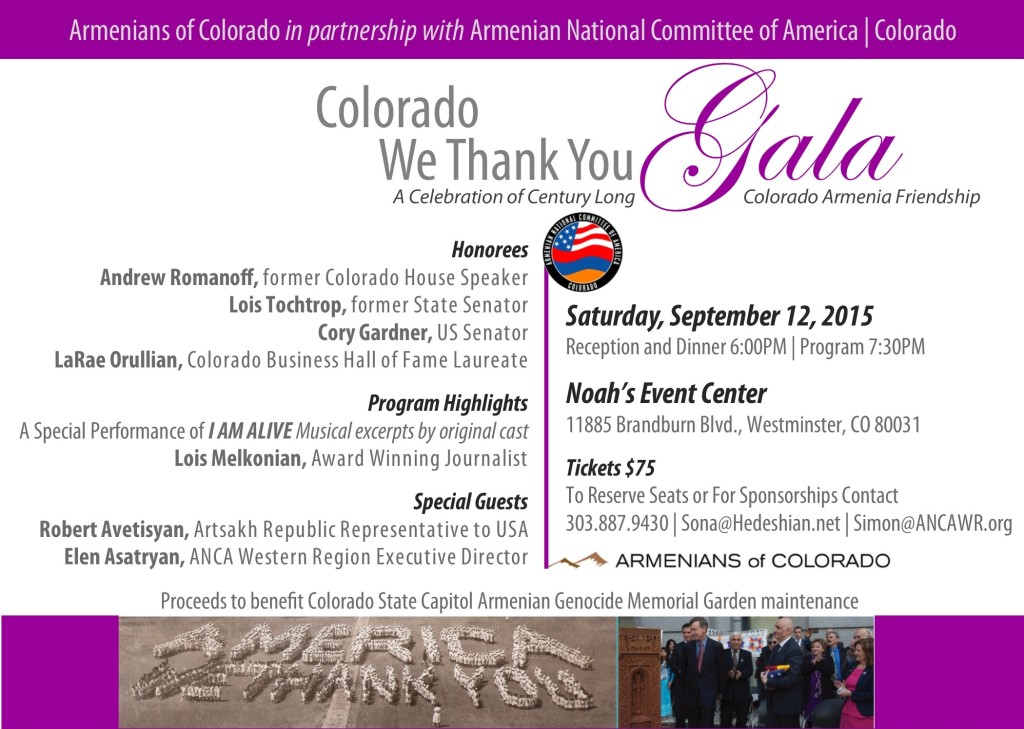 “Colorado We Thank You” Gala Set for September 12

DENVER — Armenians of Colorado, Inc. in partnership with the Armenian National Committee of America – Colorado (ANCA Colorado) announced this week that the much anticipated “Colorado We Thank You” Gala, a celebration of century long Colorado-Armenia friendship, will be held on Saturday, September 12, 2015. The gala will be held at the beautiful Noah’s Event Venue in Westminster, Colorado.

“We are thrilled to have an opportunity to thank our supporters and highlight our community stars in the Centennial Anniversary of the Armenian Genocide. This year Colorado was one of the worldwide leaders in commemorating the 1915-1923 Armenian Genocide with groundbreaking events, including premiering Denise Gentilini’s I AM ALIVE Musical and sponsoring the unveiling of America’s first capitol khachkar memorial,” remarked Sona Hedeshian, president of the board of Armenians of Colorado, Inc.

“Colorado We Thank You,” Gala inspired by ANCA Western Region’s “America We Thank You” initiative, will honor long-time supporters of the Armenian community, as well as celebrate Armenian Americans’ contribution to the Centennial State. The Gala will feature special guests Robert Avetisyan, Artsakh Republic Representative to USA, and Elen Asatryan, Executive Director of the ANCA Western Region.

“We are grateful for and humbled by the outpouring of support from Coloradans. Support of Armenian issues has been a longstanding commitment in Colorado history. From raising money and awareness 100 years ago for the Armenian Genocide survivors, to reaffirming the Armenian Genocide in a resolution in the State Legislature year after year, and most recently for the new Armenian Garden and stone cross monument on the grounds of the State Capitol, the citizens of Colorado have upheld great American values. I look forward to joining in honoring the many supporters of our community at the gala,” stated Jirair Christianian ANCA Colorado member of the Board of Directors.

Among the honorees are former Colorado House Speaker Andrew Romanoff and former State Senator Lois Tochtrop, who have played key roles in repeatedly introducing Armenian Genocide resolution at the Colorado State legislature, including the 2013 resolution that authorized the installment of an Armenian khachkar on capitol grounds. The gala will also honor US Senator Cory Gardner, who was the lead Republican Senate sponsor of the 2015 Armenian Genocide Truth and Justice Resolution. The gala will highlight Colorado’s heroic response to the Armenian Genocide as part of the Near East Relief Effort, as well honor other Colorado officials who have supported Armenian American issues in recent years, including Representatives Tim Dore, Dominick Moreno and Paul Rosenthal, and Senators Larry Crowder and Linda Newell.

Among the Armenian American honorees of the gala are LaRae Orullian and Ken Allikian, long-time leaders in Colorado. Orullian is a laureate of the Colorado Business Hall of Fame and has held senior leadership positions at Colorado Business Bank, Frontier Airlines, and Girl Scouts of America. Ken Allikian is a long-time leader of the Armenian community, and has served as a Colorado state executive for more than three decades.

The program will include traditional Armenian dances, and a special performance of selected songs by original cast from the new musical I AM ALIVE written by Colorado’s own Emmy award winning Denise Gentilini with co-writer Lisa Nemzo. The Master of Ceremonies is Award Winning Colorado-based journalist and author Lois Melkonian.

“Colorado We Thank You” gala will be kicked off with a cocktail reception and dinner at 6:00 pm followed by a powerful program at 7:30pm, where over one hundred activists, supporters, donors, and public officials will come together to honor Armenia’s Coloradan and Colorado’s Armenian heroes. Proceeds from the event to benefit the Colorado State Capitol Armenian Memorial Garden maintenance.

Tickets for the event are $75.00. To reserve seats or for sponsorship opportunities call 303.887.9430 or email sona@hedeshian.net or simon@ancawr.org.

Armenians of Colorado, Inc. (AOC) was established in June 1980 as a 501(c)3 non-profit cultural organization. Its purpose is to create a cohesive Armenian community and to further the understanding of Armenian history, culture, language, customs, and heritage. AOC actively supports issues and concerns of the Armenian-American community in Colorado as well as those identified within the Armenian Diaspora throughout the world. For more information, visit www.armeniansofcolorado.org.

The co-organizer of the event, the Armenian National Committee of America Colorado is one of the many local chapters of the Armenian National Committee of America – Western Region, the largest and most influential Armenian American grassroots advocacy organization in the Western United States. Working in coordination with a network of offices, chapters, and supporters throughout the Western United States and affiliated organizations around the country, the ANCA-WR advances the concerns of the Armenian American community on a broad range of issues. For more information about ANCA WR visit www.ancawr.org.

The ANCA-WR initiative “America We Thank You: An Armenian Tribute to Near East Relief,” is a movement to recognize the outpouring of generosity by the American people from the onset of the Armenian Genocide (1915-1923) and for 15 consecutive years, and to highlight the efforts of Near East Relief in rescuing and providing assistance to hundreds of thousands of men, women and children who were victims of the Genocide. For more information about AWTY visit www.americawethankyou.org.