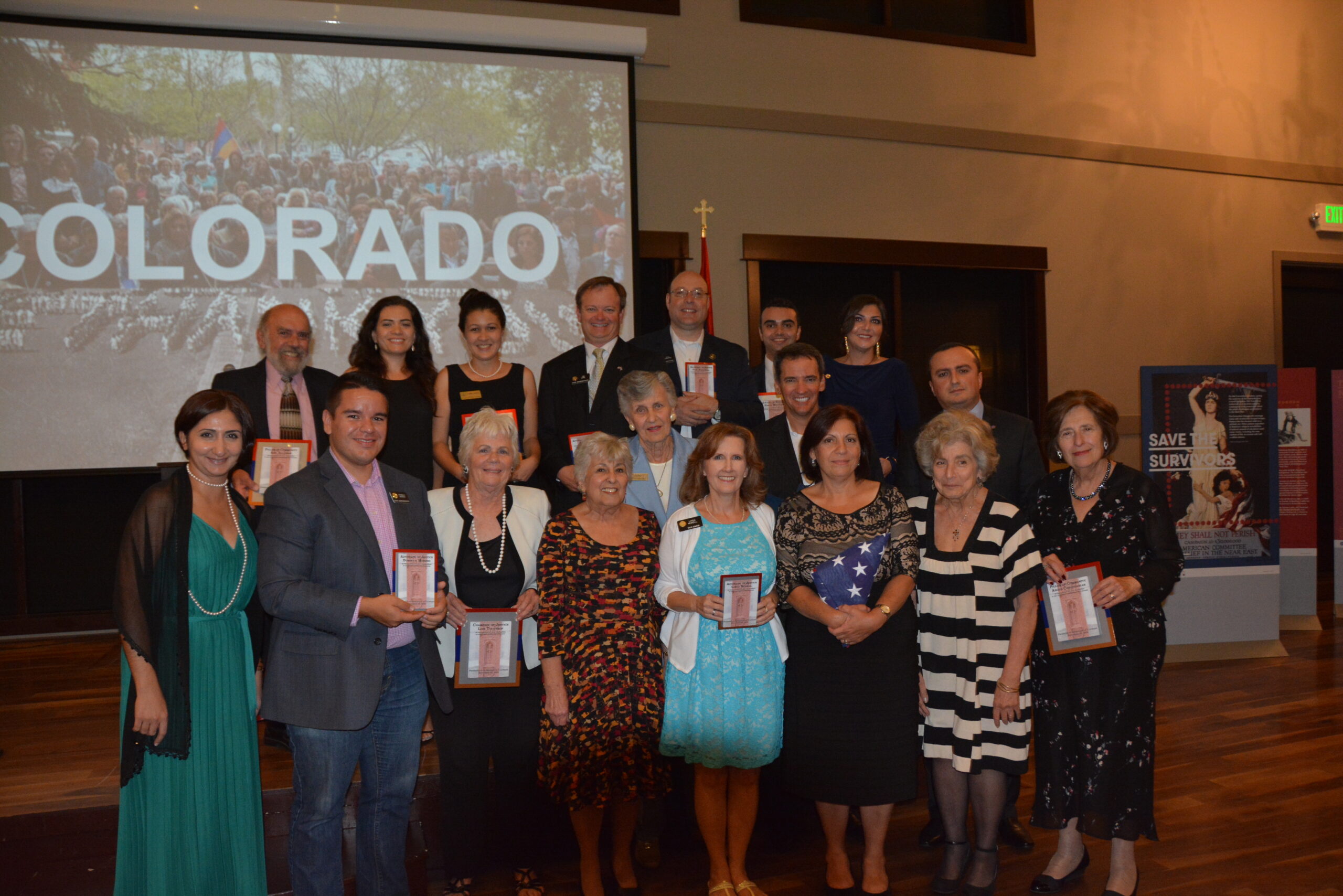 On Saturday, September 12, community leaders, elected officials and activists filled Noah’s Event Center in metro Denver to capacity to celebrate a century of Colorado-Armenia friendship, including this year’s monumental unveiling of America’s first capitol khachkar in honor of the victims and survivors of the Armenian Genocide. Organized by Armenians of Colorado (AOC) in partnership with the Armenian National Committee of America – Colorado (ANCA Colorado), the prolific “Colorado, We Thank You” gala honored eight Democratic and Republican public officials’ unwavering support on Armenian American issues, as well as longtime community leaders who’s dedication and commitment to the advancement of the Armenian cause has created ripple effects in the community’s overall positive accomplishments leading up to the Armenian Genocide Centennial.

Three notable honorees of the evening received the Champion of Justice award. US Senator Cory Gardner, represented by Regional Director Annie Larson, was awarded for standing as the lead Republican sponsor of the 2015 Armenian Genocide Truth and Justice Resolution in the United States Senate. Former Colorado House Speaker Andrew Romanoff and former CO Senator Lois Tochtrop were honored for their longtime leadership in ensuring proper recognition of the Armenian Genocide in the Colorado state legislature as well as their personal involvement in championing the campaign to install a capitol khachkar on the centennial anniversary of the Armenian Genocide. In his remarks, Speaker Romanoff stated that “by being honored we are getting recognition we truly don’t deserve. You are honoring us for simply affirming the truth.” Senator Tochtrop expressed hope that her colleagues at the state legislature “will continue to educate the people all over Colorado to make sure we don’t ever forget the genocide,” while Larson shared a heartfelt note from Senator Garner conveying his hopes of continuing to work closely with Armenians of Colorado in pursuit of justice.

Five other Colorado lawmakers received the Advocate of Justice Awards. CO Senator Linda Newell and Representatives Dominick Moreno, Paul Rosenthal, and Tim Dore were honored for their strong advocacy for Armenian Genocide awareness. Senator Larry Crowder was acknowledged for his support of Artsakh, as demonstrated in his decision earlier this year to withdraw a pro-Azerbaijan resolution and standing on the right side of history after being educated on the issue by ANCA-Western Region (ANCA-WR). Rep. Rosenthal commended the gala on social media, and briefed his followers on his most recent meeting with Robert Avetisyan, which included talks on bringing “peace and stability in the Middle East”.

Local Armenian American leaders were also awarded during the celebratory evening. Colorado Business Hall of Fame laureate and Women’s Bank founder LaRae Orullian, who has a breathtaking record of establishing and leading a number of successful businesses and was one of the founding members of the AOC, was awarded with the Lifetime Achievement Award. Long-time community leaders Ken Allikian, Pearl Safarian, and Arous Christianian were honored for being pillars of their community. Energetic leader Sona Hedeshian was presented with a US flag flown over the state capitol at the order of Governor John Hickenlooper in honor of her tenure as president of the Board of Directors of Armenians of Colorado, Inc. Her leadership was particularly commendable this year, when Colorado shined internationally with its centennial commemorations. ANCA-WR’s Simon Maghakyan, a volunteer leader in Colorado, was presented with the Award of Excellence for initiating and leading the unparalleled capitol khachkar campaign in the face of strong opposition from genocide deniers.

Special guests and keynote speakers Robert Avetisyan, Representative of Artsakh Republic to USA, and Elen Asatryan, Executive Director of ANCA-WR, thanked the lawmakers for their dedication to Colorado’s Armenian community, as well as congratulated the community’s successes of the centennial year.

Asatryan kicked off her remarks by stating, “It is such an honor and privilege to be with you here today for this momentous occasion to celebrate Colorado’s incredible accomplishment and successes. Because you see, successes of such magnitude, that are not just talk of the town, the state, the country, but all across the world, are never accidental. They don’t just happen. They require unwavering commitment, dedication, patience, persistence and drive – a drive to preserve our culture and heritage and seek justice for a cause and a crime that has gone unpunished for far too long.”

She continued on with details about a proud and lost chapter in US history during which time the United States and the American people through the Near East Relief came to the rescue of the Armenian nation during and in the aftermath of the Armenian Genocide. Asatryan closed her remarks by calling on the attendees to increase the number of Armenian-American registered voters and to continue in its pursuit of justice as she stated, “But our work is not done. Your work is not done. We are just beginning. We must now take that drive, commitment, and dedication that was placed in ensuring the Armenian Genocide Memorial on State Capitol grounds was built and place it in ensuring that this story is placed in its rightful place – in museums, in American history books, and taught to the next generation. We are now all called to duty to make sure this this story is incorporated in the curriculum and actually taught in every school and college district…in every state, across the country.”

Avetisyan spoke at length on the past, present, and future of Artsakh, mentioning that “Artsakh is a piece of the Armenian homeland which has gone through challenges in order to preserve its identity, its culture, its choice of religion. It is with gratitude that we receive the news from legislatures of such American states as California, Massachusetts, Louisiana, Rhode Island and Maine in support of our young democracy, and we hope that that list of states and countries will only grow. As we’ve gathered today to say ‘Colorado, we thank you’, I join my compatriots in this hall and all Armenians in the state to express our gratitude.”

Avetisyan went on to state, “As Armenians, Artsakhtsis thank Colorado for being home to so many our compatriots; for welcoming a small group of Armenian immigrants, the Sarkisians, who arrived here in the 19th century and eventually established the oldest business still in existence in Denver. We are grateful for the leadership of Governors Gunter and Shoup, thousands of Coloradans who helped and, in many cases, saved from starvation our compatriots – victims of the Armenian Genocide. We say ‘thank you’ to Senator Gardner, former Speaker Romanoff, former Senator Tochtrop, all your colleagues here in Denver and in Washington, DC for the tireless efforts in promoting truth and justice regarding the Genocide, for your efforts to make the world a safer place. Artsakhtsis say thank you for turning down anti-Armenian motion in the Colorado State Senate, for helping your fellow Senators from falling into a trap of misleading and manipulation by a corrupt Azeri regime. We are grateful to Senators Crowder, Newell; Representatives Dore, Moreno, Rosenthal and many others”.

Both guests were presented with Colorado flags flown in their honor at the Colorado State Capitol at the request of Governor John Hickenlooper.

Colorado-based award-winning journalist Lois Melkonian served as the MC for the evening. She beautifully narrated a slideshow prepared by Maghakyan on the history of Colorado’s support for Armenia and the Armenian community, as well as the community’s contribution to the growth of the Centennial State. The latter part of the slideshow reflected upon this year’s commemorative events in Colorado: “We remember our culture destroyed not only 100 years ago, but also 10 years ago. And then we rebuild. We run to remember 1.5 million lives. We sing their pain and celebrate our survival. We come together to make Capitol grounds more beautiful and more meaningful. We celebrate as the khachkar, a replica of what was destroyed, arrives from Armenia. We install. We unveil. We thank our friends who honor the memory of genocide. We can even smile on the 100th anniversary of this great crime in history. Because we know that we have won. Because we know we are strong when we are united as one. But we always remember friends like you. So, dear Colorado, we thank you. We thank you.”

Invocation was conducted by Reverend Brian Henderson, Pastor of the First Baptist Church of Denver. The church has not only supported the Armenian community throughout the Centennial year, but also played an instrumental role in the Near East Relief effort of saving Armenian orphans in the 1920s, including hosting the 1919 Colorado State Convention for Near East Relief.

Three-time Emmy Award winning composer Denise Gentilini introduced the cast of her musical I AM ALIVE, as well her co-producer and wife Lynette Prisner, and co-writer Lisa Nemzo. The musical, which premiered in Denver in April and was co-produced by Armenians of Colorado, tells the story of Gentilini’s grandparents’ miraculous survival in the Armenian Genocide. Three moving songs were performed from the musical by original cast members. The gala was concluded by heartwarming solo dances by two young members of the Armenian community – Mane Madoyan and Helen Nikoghosyan. Earlier, they and their siblings, dressed in Armenian traditional costumes, greeted all guests with traditional bread and salt.

Proceeds from the event will be earmarked toward the maintenance of the Armenian Memorial Garden on Colorado’s Capitol grounds.

Armenians of Colorado, Inc. (AOC) was established in June 1980 as a 501(c)3 non-profit cultural organization. Its purpose is to create a cohesive Armenian community and to further the understanding of Armenian history, culture, language, customs, and heritage. AOC actively supports issues and concerns of the Armenian-American community in Colorado as well as those identified within the Armenian Diaspora throughout the world. For more information, visit www.armeniansofcolorado.org.

The co-organizer of the event, the Armenian National Committee of America Colorado is one of the many local chapters of the Armenian National Committee of America – Western Region, the largest and most influential Armenian American grassroots advocacy organization in the Western United States. Working in coordination with a network of offices, chapters, and supporters throughout the Western United States and affiliated organizations around the country, the ANCA-WR advances the concerns of the Armenian American community on a broad range of issues. For more information about ANCA WR visit www.ancawr.org.

The ANCA-WR initiative “America We Thank You: An Armenian Tribute to Near East Relief,” (AWTY) is a movement to recognize the outpouring of generosity by the American people from the onset of the Armenian Genocide (1915-1923) and for 15 consecutive years, and to highlight the efforts of Near East Relief in rescuing and providing assistance to hundreds of thousands of men, women and children who were victims of the Genocide. For more information about AWTY visit www.americawethankyou.org.