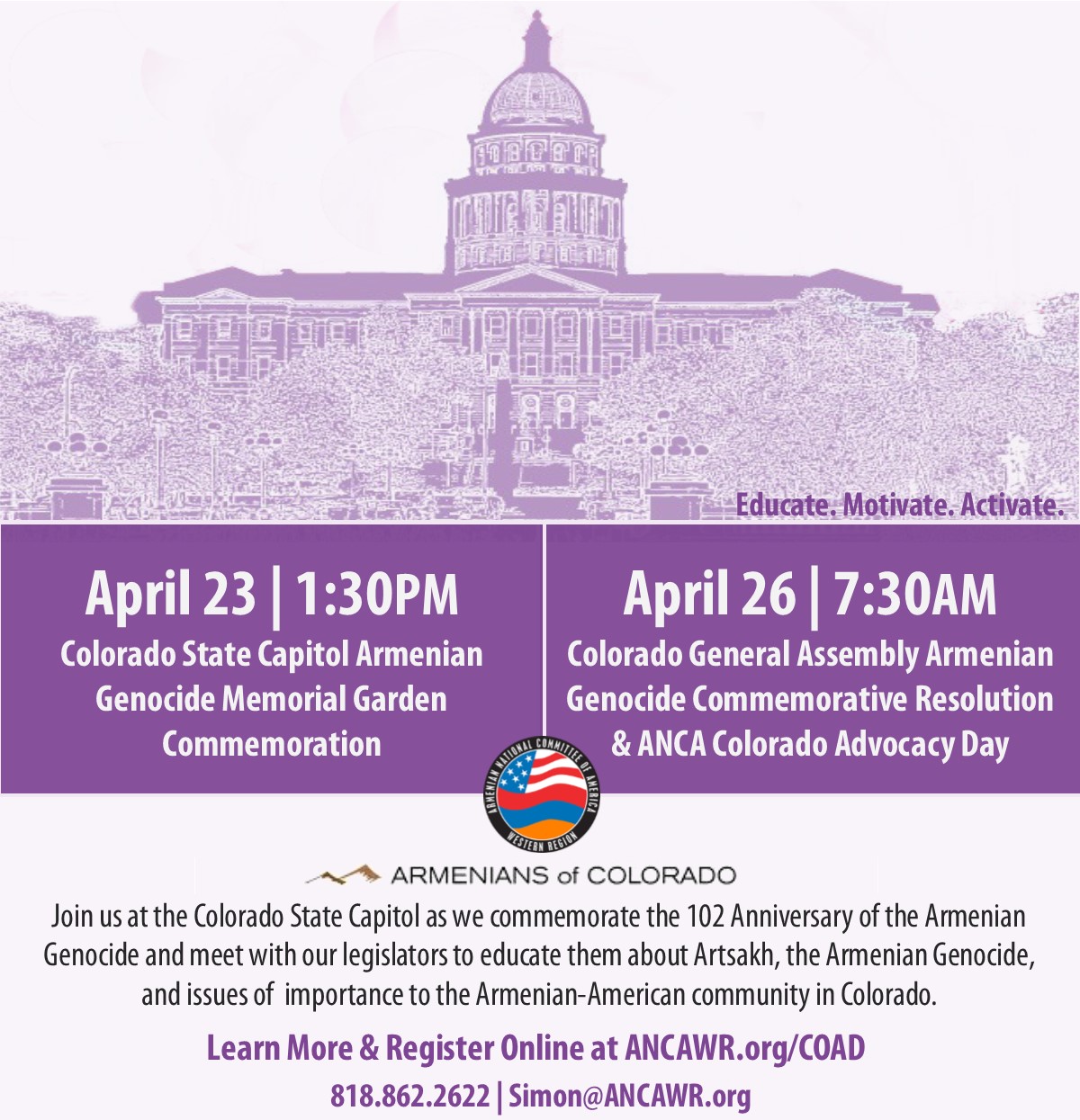 On Wednesday, April 26, 2017, community members and activists from across Colorado will join their State Legislature, the Armenian National Committee of America-Western Region (ANCA-WR), and Armenians of Colorado (AOC) in commemorating the 100+2 Anniversary of the Armenian Genocide at the State Capitol in Denver. On the same day, the ANCA-WR will host its 2017 CO Advocacy Day, which will include meeting opportunities with state legislators and events around the capitol.

“Colorado’s Armenian American grassroots has become a vital voice in their state’s democratic process, and we need to work together to achieve even more tangible results in the Centennial State,” remarked ANCA-WR Chair Nora Hovsepian. “We look forward to educating Colorado legislators on issues of concern to the Armenian American community, as well as joining them as they commemorate the 102nd anniversary of the Armenian Genocide in an annual resolution.”

The day’s activities will include community briefings, Armenian Genocide Commemoration ceremonies on the house and senate floors, and meeting with state legislators and administrators. During the meetings, participants will educate their representatives on Artsakh, the proud chapter in Colorado’s history that helped save the Armenian nation from annihilation during the Armenian Genocide and advocate for issues of importance to the Armenian-American community including the devastating war crimes being committed by Azerbaijan in Artsakh and Artsakh’s right to self-determination.

The Advocacy Day, which will be led by ANCA-WR Board member Sako Berberian, ANCA-WR Executive Director Elen Asatryan and Denver-based community development coordinator Simon Maghakyan, will kick off with a 7:30AM briefing and training at the ANCA Denver office, located at 1373 Grant Street across the street from the Colorado State Capitol.

On the Sunday before the Advocacy Day, community members, elected officials, and supporters will gather at the Colorado State Capitol Armenian Memorial Garden, which was founded in 1982 by Armenians of Colorado (AOC) and renewed in 2015 with the installment of America’s first capitol khachkar memorial, to commemorate the 102nd anniversary of the Armenian Genocide. Speakers at the 1:30 PM April 23 capitol grounds commemoration will include State Sen. Daniel Kagan, State Rep. Cole Wist, Christian Solidarity International Outreach Director Pastor Heidi McGinness as well as AOC and ANCA-WR representatives.

Community members interested in participating in the April 26 Colorado Advocacy Day may register on www.ancawr.org/coad or contact simon@ancawr.org or 818.862.2622.