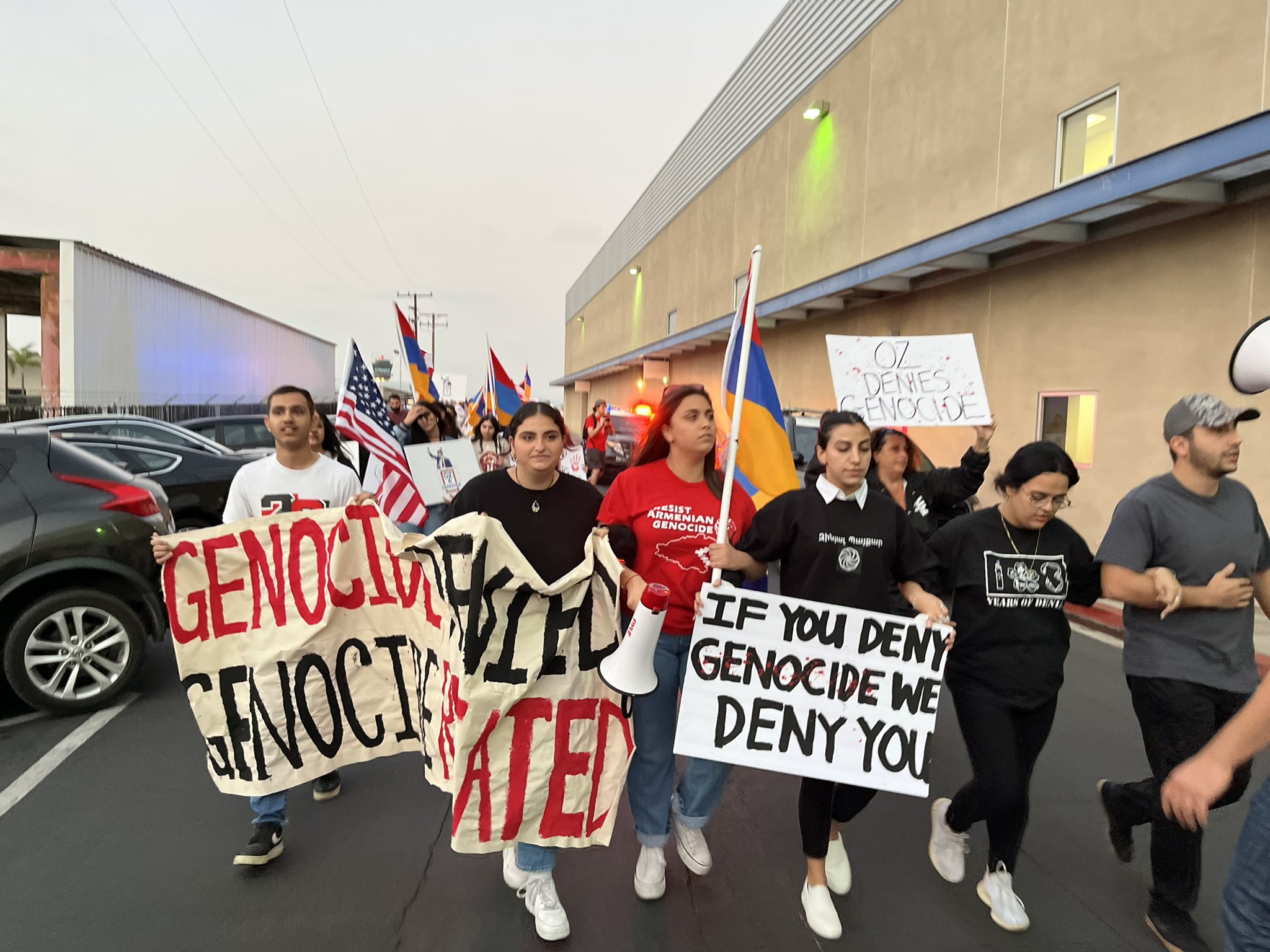 Pennsylvania’s Armenian and Greek communities have joined with the Rabbi Shmuley Boteach – ‘America’s Rabbi’ – to protest Pennsylvania Senate candidate Dr. Mehmet Oz’s ongoing refusal to properly characterize the Ottoman Turkish Government’s murder of over 2 million Armenians, Greeks, and other Christians from 1915-1923 as Genocide.  A dual U.S.-Turkish citizen, who has served in Turkey’s military and has voted in elections in Turkey, Dr. Oz has close ties with Turkey’s autocratic President Recep Erdogan, and leading Turkish American groups that continue to rally against proper U.S. commemoration and condemnation of the Armenian Genocide.

The October 12th action is the third of a series of planned protests – the first of which, organized by Armenian and Jewish Americans, led by Rabbi Boteach, forced the cancellation of a high-dollar fundraiser for Dr. Oz in Englewood, NJ earlier this week.  The second, organized by the Armenian YouthFederation Western U.S. (AYF-WUS), took place on October 6th at the Lyon Air Museum in Santa Ana, where the AYF called on “the Dr. Oz for U.S. Senate Campaign to right its wrong by fully and transparently recognizing the Armenian Genocide and standing with the U.S. government in holding Turkey accountable for its atrocious crime.”

“Any politician who does not speak out against genocide, who does not actively work to prevent genocide or who denies genocide would even be criticized by a friend,” explained Rabbi Boteach in a recent Jerusalem Post piece.  “Oz should acknowledge the Armenian genocide or he is unworthy of being a US senator and should withdraw from the race.”

In the same piece, Rabbi Boteach also spoke out against Dr. Oz’s refusal to “condemn the vicious antisemitism of Turkish President Recep Tayyip Erdogan, who calls Jews ‘Nazis’ and ‘Hitler,’ and Erdogan’s brutal dictatorship, which has destroyed Turkish democracy.”

The Armenian National Committee of America (ANCA) national office, along with its Eastern U.S. regional and Pennsylvania local affiliates have teamed up with the Hellenic American Leadership Council (HALC) in running a grassroots campaign calling attention to Dr. Oz’s genocide denial.

In an op/ed in the Washington Times, ANCA Executive Director Aram Hamparian explained, “For Americans of Armenian heritage – having spent the better part of the past century working, successfully, to end U.S. cover-ups of Turkey’s genocidal crimes – it would represent a betrayal of the worst kind, a shameful rollback of America’s commitment to human rights, to send to the U.S. Senate an ally of Erdogan, the world’s foremost Armenian Genocide denier.”

These concerns have been spotlighted in news coverage by NBC News, the New York Post, Forbes, Daily Wire, Daily Caller, and Breitbart, among others.  A video spotlighting Dr. Oz’s Armenian Genocide denial  – posted by the ANCA and HALC and produced by the Really American PAC – went viral with over 1.8 million views on Twitter. The ANCA has also called for a US Department of Justice investigation into whether Oz may be in violation of the Foreign Agent Registration Act (FARA) of 1938 for his endorsement agreement with Istanbul-based Turkish Airlines, through which Oz provides “consulting services, certain media, and in-flight film appearances.”

ANC of Pennsylvania co-chair Nora Kzirian explained, that the organization “has expressed its concerns over Oz’s candidacy from the very beginning. Deeper ties to the Turkish government and its interests are uncovered every day. Pennsylvanians deserve a senator who will represent our interests – not those of dictator Recep Erdogan,” explained.  Fellow co-chair Karine Shamlian concurred, telling NBC News, “We feel that this Senate seat is in jeopardy of being controlled by a foreign government, quite honestly.”

By contrast, rival Pennsylvania Senate candidate, Lt. Governor John Fetterman has been clear in his recognition of the Armenian Genocide.  “As a Pennsylvanian, I welcomed long overdue U.S. government recognition of the Armenian Genocide – by the U.S. House and Senate in 2019 and by President Biden in 2021 – and will, as a U.S. Senator, support promoting public education about this atrocity,” stated Fetterman in a statement to the ANCA.