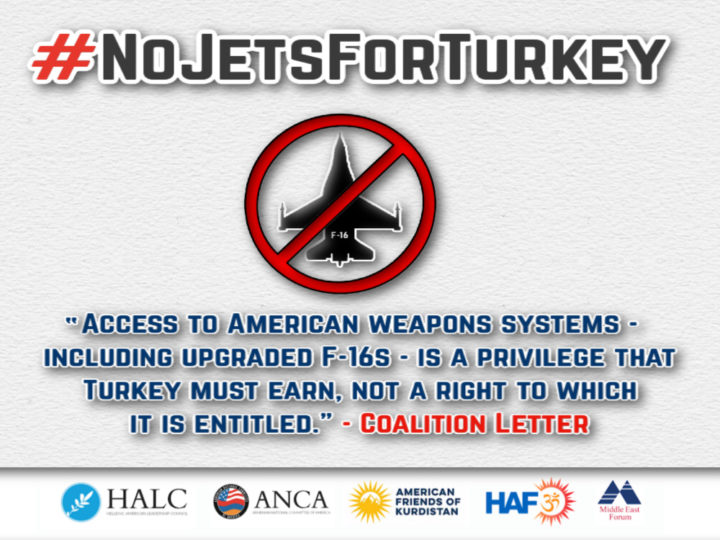 WASHINGTON, DC – A coalition of ethnic, faith-based, and civic groups representing Americans from across the nation are calling on Senate leaders – and working with U.S. Representatives – to enforce U.S. sanctions on Turkey and block Erdogan’s request to purchase 40 F-16 fighters and 80 F-16 modernization kits.

The civic groups referenced issues raised by the Senators published in a joint The New York Times op/ed on April 9, 2019, titled “A U.S. Fighter Jet or a Russian Missile System. Not Both,” arguing that the same reasons to block the sale of F-35s to Turkey should apply to President Erdogan’s current request to purchase F-16s. They noted that the F-16 sale would undermine Countering America’s Adversaries Through Sanctions Act (CAATSA) sanctions, initially put in place under the previous Administration, as well as “the broader legislative intent of Congress, which passed this law with overwhelming bipartisan support and has maintained a hold over new American weapons purchases by an increasingly malign Turkey.”

The coalition concludes, “Access to American weapons systems — including upgraded F-16s — is a privilege that Turkey must earn, not a right to which it is entitled. Such access must be withheld until Turkey proves that it will honor and align with American law, values, interests, and alliances.” The coalition letter is available here.

In the U.S. House, the coalition is backing a Congressional letter to Secretary of State Blinken, led by Representatives Chris Pappas (D-NH) and Congressional Hellenic Caucus Co-Chairs Carolyn Maloney (D-NY) and Gus Bilirakis (R-FL). The bipartisan letter expresses concern about the sale of F-16s and modernization kits, noting security risks associated with the sale and arguing that by Erdogan’s own words, Turkey has shown no intention of coming into compliance with U.S. law. “We share your goal of a Turkey that is rooted to the West, but we will not achieve that goal if the Erdogan government escapes accountability for violating U.S. law and the standards of the NATO alliance,” argue the Representatives. The House members are requesting “a formal notification of any Turkish Letter of Request (LOR), the specifics of such an LOR, the Administration’s position on such an LOR, and responses to our specific objections.”

Earlier this week, Rep. Nicole Malliotakis (R-NY) was joined by ten House members in urging President Biden and Secretary Blinken to refuse Turkey’s request to purchase the F-16’s and modernization kits. “As long as President Erdogan advances his expansionist project in the Eastern Mediterranean, Turkey will continue to threaten our national security and the security of our closest allies in the region – Greece, Israel, and Cyprus. We urge you to act in our national interest and for the sake of stability in the Eastern Mediterranean by refusing to reinforce Turkey’s aging arsenal of fighter jets, and we look forward to receiving your response,” wrote Malliotakis, who was joined in cosigning the letter by Representatives Pappas, Maloney, Bilirakis, David Cicilline (D-RI), Jim Costa (D-CA), David Valadao (R-CA), John Sarbanes (D-MD), Dina Titus (D-NV), Brian Fitzpatrick (R-PA), and Jackie Speier (D-CA).