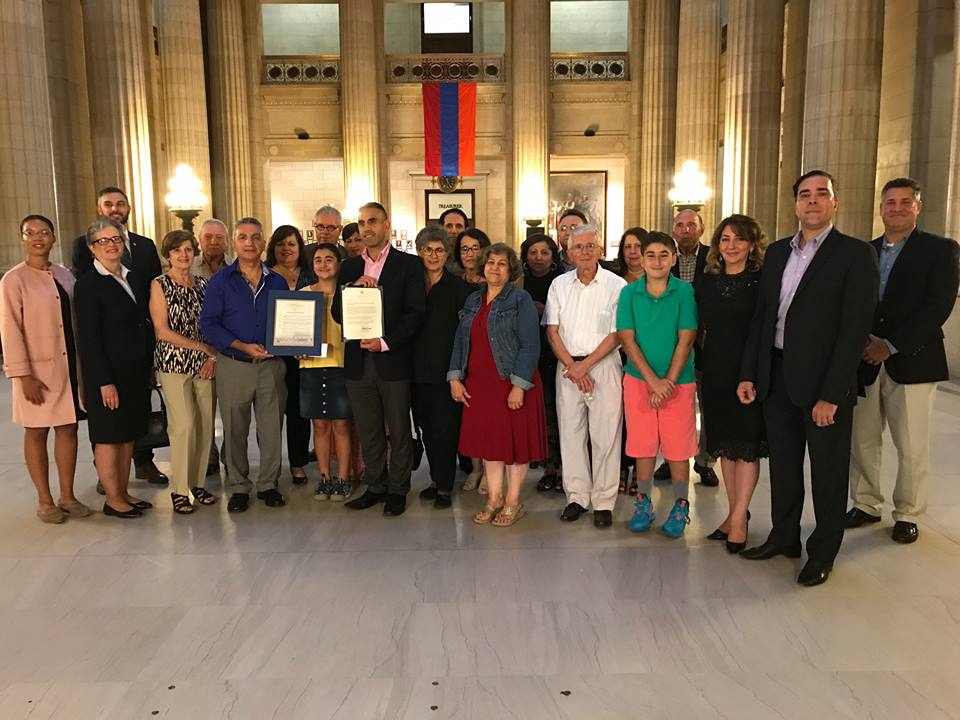 Cleveland, OH – The Armenian flag flew high above Cleveland City Hall on September 21st, as Armenian-Americans of Cleveland and throughout the Buckeye State gathered to celebrate Armenia’s 26th independence, at a reception organized by the Armenian National Committee of Ohio (ANC of Ohio).

“Today’s Armenian Independence Day celebration reaffirms the unique bond between the local Armenian community and the City of Cleveland, which we have called home for over a century,” said ANC of Ohio Chairperson Rouben Sagatelov. “Special thanks to Mayor Jackson for leading our city’s celebration of our shared values of freedom, democracy and prosperity here and in the Armenian homeland.”

Mayor Jackson issued a proclamation marking Armenia’s 26th Independence anniversary and noting the Armenian community’s longstanding contributions to the city. “Cleveland is proud to be called home to a vibrant Armenian Community whose rich cultural heritage and family values continue to be passed along to future generations through the many Armenian-American religious, social, fraternal and cultural organizations in our city,” noted Jackson’s proclamation.

The full text of the proclamation is provided below.

Senator Sherrod Brown (D-OH) concurred, stating “For more than a century, Armenian-Americans have been part of the fabric of our greater Cleveland community. You’ve enriched our city with your culture and food and faith, and today is an opportunity to celebrate that heritage.” In his letter to celebration participants, Senator Brown went on to note, “We are a nation of immigrant that has opened our doors to those fleeing oppression and violence for decades, and we are a better country and a better state because of communities like this one that we celebrate today.”

The celebration kicked off with the national anthems of the United States and Armenia, played by Grigor Galstyan. In addition to the presentation of the Cleveland proclamation and Senator Brown’s statement, the program included remarks by ANC of Ohio Chairperson Rouben Sagatelov as well as community representatives Razmig Pounardjian and Tigran Baghdasaryan.

Armenian immigration to Cleveland began in the early 1900s, when employees of the American Steel and Wire factory based in Massachusetts, started coming to Cleveland to work in a newly opened branch of the firm. By 1913 there were more than 100 Armenians – a trend that greatly increased in the 1920s. Many of the immigrants were from Malatya.

After WWII Armenian population of Cleveland approached 1,500 and the community achieved economic security. During the 1970s, a time of political dislocation in Lebanon and Iran – countries with substantial Armenian minorities – a few new families settled in Cleveland. The community has remained stable since 1960s, with a population nearing 2,500. During 1990 s many Armenian refugees from Azerbaijan found their home in Cleveland. Today, the Armenian community is proudly present in all aspects of Cleveland’s city life, including in business, social, and political realms.

Whereas, Armenian Statehood and its efforts for sovereignty have roots dating back centuries. Armenia is recognized as the first nation adopting Christianity in the year 301 as the State religion; in 1918-1920 the first Armenian democratic republic was established after the Armenian Genocide in 1915; and,

Whereas, on September 21, 1991, Armenia restored its independence, becoming the first republic proclaiming independence from the then Soviet Union, and did so without any support or tacit agreement with any foreign power. The Armenian nation defended its independence and the freedom of Nagorno-Karabakh and has since developed as a state and a prosperous, successful, peaceful and safe country with strong international relations. Armenia is now a model for its brothers and sisters in the region; and,

Whereas, Cleveland’s Armenian residents, and representatives from international businesses and educational communities, have united to celebrate Armenia’s 26th birthday; and,

Whereas, Cleveland is proud to be called home to a vibrant Armenian Community whose rich cultural heritage and family values continue to be passed along to future generations through the many Armenian-American religious, social, fraternal and cultural organizations in our city.

Now therefore I, Frank G. Jackson, the 56th Mayor of the City of Cleveland, do hereby offer this Proclamation in recognition of Armenian Statehood Day. I urge all citizens to join me in extending a warm welcome to everyone attending and best wishes for an enjoyable celebration.

In witness thereof, I have set my hand and caused the Corporate Seal of the City of Cleveland to be affixed on this 21st day of September in the year 2017.