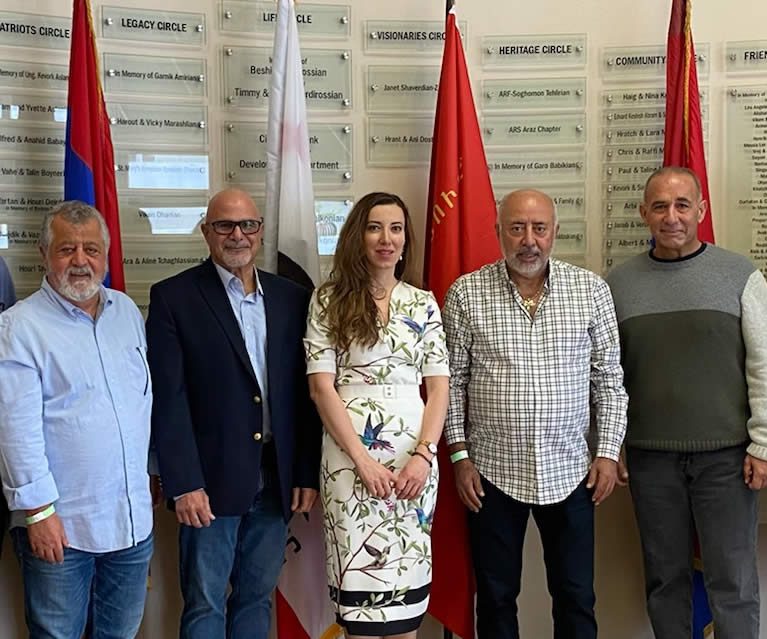 On September 10, Siranush Sahakyan, Human Rights Attorney and chief counsel for Armenian prisoners of war and their families at the European Court of Human Rights visited the Greater Los Angeles Area at the invitation of the Armenian Legal Center for Justice and Human Rights (ALC), the Armenian Bar Association (ABA), and the Armenian Revolutionary Federation Western United States of America (ARF-WUSA) Central Committee.

Sahakyan is the president of Yerevan’s International Comparative Law Center (ICLaw) and was invited to Los Angeles to provide updates on the work she and her colleagues are doing to bring Armenian prisoners of war home from captivity in Azerbaijan.  Sahakyan is the human rights attorney filing cases with the European Court of Human Rights (ECHR) on behalf of the Armenian prisoners of war.

Sahakyan not only serves as the president of the ICLaw, but is also the co-founder of Path of Law NGO and an adjunct lecturer at the American University of Armenia where she also serves as the coordinator of the master’s program in human rights and social justice. Through her work with the ICLaw, she is currently working in partnership with the Armenian Legal Center for Justice and Human Rights on gathering evidence, witness testimony, preparing legal dossiers to file with the ECHR, as well as other international bodies responsible for such cases, on behalf of the families of prisoners of war and those identified as missing in action.

The ALC, based out of Washington D.C. is an international legal institute that was founded in 2016 with a generous grant from the Armenian National Committee of America (ANCA) Endowment Fund.

Saturday morning, at the invitation of the ARF-WUSA Central Committee, Sahakyan provided a public briefing on the status of Armenian POWs at the Beshir Mardirossian Youth Center in Burbank, where daylong “Artsakh Day” activities were being hosted by the ACF Burbank Chapter, Homenetmen “Sipan” Chapter, ARS “Araz” Chapter, and ARF “Aghbalian” Gomideutyun.

Sahakyan was introduced by Steve Dadaian, co-chair of the ALC, who also moderated and fielded questions from the capacity audience in attendance. During her interactive presentation, Sahakyan shared meticulously collected facts and evidence about the Armenian prisoners of war held by Azerbaijan, and the criminal inhumanity of the Azerbaijani regime.

Later in the evening, Sahakyan was the special guest at a fundraiser for rededication to the release of Armenian prisoners of war at the Hovannisian residence in Sherman Oaks, California.  The event was co-organized by the ALC and the ABA.  Over a hundred influential members of the local community, including Glendale Mayor Ardy Kassakhian, California State Assemblymember Adrin Nazarian, L.A. Superior Court Judge Zaven Sinanian, and others gathered to raise funds in support of the continuing legal efforts to secure the freedom and return of the Armenian POWs.

Armen Hovhannisian made opening remarks and then invited Lucy Varpetian, chairwoman of the Armenian Bar Association, who spoke about the importance of Sahakyan’s work and the necessity to support it.  Also making remarks was ARF WUSA Central Committee member Hovig Saliba, who emphasized that the Armenian Revolutionary Federation, whether in Armenia or in the Western United States, will continue to support the initiatives of the Armenian Legal Center and work of patriots like Sahakyan because the ARF, with its united worldwide organization, always stands with and besides the soldiers of the Armenian nation.
After dinner, Sahakyan shared her interactive presentation, as she had done in the morning, with the attendees of the evening’s fundraiser, which was followed by a question and answer session and an opportunity by those present to speak with and interact with Sahakyan.

After dinner, Sahakyan shared her interactive presentation, as she had done in the morning, with the attendees of the evening’s fundraiser, which was followed by a question and answer session and an opportunity by those present to speak with and interact with Sahakyan.