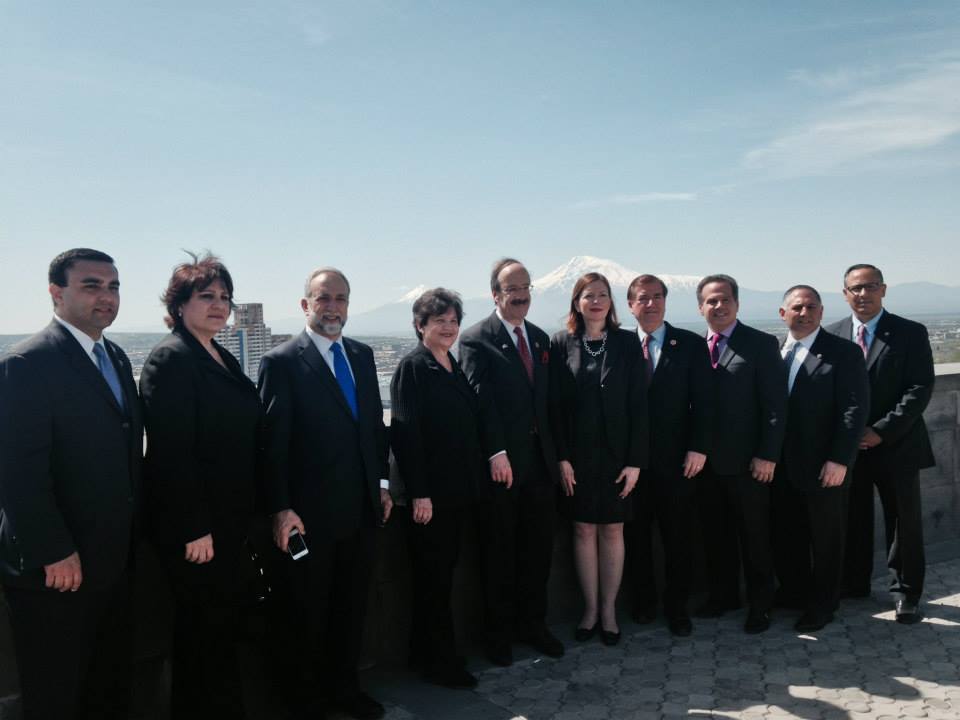 “It’s much harder to get tomorrow right if we get yesterday wrong.” – Chairman Ed Royce, U.S. House Foreign Affairs Committee, Speaking at the Armenian Genocide Memorial in Armenia

YEREVAN, ARMENIA – In a powerful show of American solidarity with the Armenian people, the Chairman and Ranking Member of the U.S. House Foreign Affairs Committee traveled to Armenia this April 24th to join with government officials and hundreds of thousands of Armenian citizens participating in events marking the 99th anniversary of the Armenian Genocide, reported the Armenian National Committee of America (ANCA).

Earlier today, Chairman Ed Royce, after placing a wreath at Tsitsernakaberd, noted that: “I am honored to be here in Armenia to express support and solidarity with the Armenian people on this day of solemn remembrance 99 years after the Armenian Genocide. History is a continuum. It’s much harder to get tomorrow right if we get yesterday wrong. It is vital for the world to accurately acknowledge the wrongs of yesterday, so that atrocities like this genocide of 1.5 million Armenians are never again witnessed.” The senior California legislator added: “I have long and wholeheartedly agreed with President Ronald Reagan, who called this first genocide of the last century exactly what it was — a genocide.”

Congressman Eliot Engel, the senior Democratic member of the House Foreign Affairs Committee, speaking during a press conference today, said: “I stand here in solidarity with our Chairman and other members of the Committee to say that it is very important for the world to acknowledge the Armenian Genocide, and we call upon Turkey to immediately recognize and apologize for the Armenian Genocide.”

Congressman Cicilline, in a strongly worded statement at Tsitsernakaberd, noted that he was “honored to be here today to remember the one and a half million martyrs who were killed during the Armenian Genocide,” and then went on to “call on Turkey to recognize this historic fact so that we can begin a real conversation about reparations.” In her comments, Rep. Frankel underscored how honored she felt, “as a Congresswoman and a mother, to stand in solidarity with the people of Armenia.”

A delegation of ANCA leaders travelled to Yerevan earlier in the week to welcome Chairman Royce and his colleagues to Armenia. ANCA Chairman Ken Hachikian thanked the members of the delegation, giving voice to the profound appreciation of Armenians worldwide for their travels to be in Armenia on April 24th and to take part of the nation’s solemn commemoration of the Armenian Genocide. “We join with Armenians from around the world in thanking Chairman Royce, Ranking Member Engel, Congressman Cicilline, and Congresswoman Frankel for their strong leadership and sincere devotion to a truthful and just resolution of the Armenian Genocide – a crime against all humanity.”

Pictures from the Congressional delegation’s visit are posted to the ANCA Facebook page at:

Complete coverage of the Congressional delegation’s visit to Armenia will be provided in upcoming days.