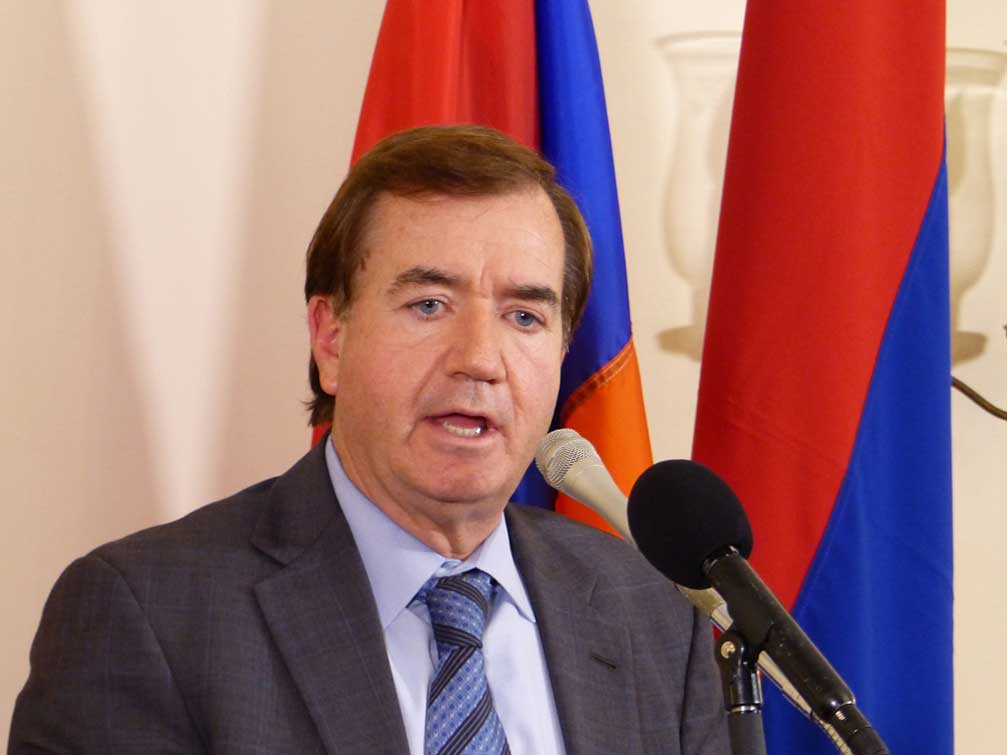 The special briefing comes as a follow up to the October 26th Congressional letter addressed to Ambassador Warlick, initiated by Chairman Royce and Ranking Democrat Eliot Engel (D-NY) and cosigned by over 80 House colleagues, outlining three concrete steps to address escalating Karabakh violence, including the removal of snipers from the border, an increase in OSCE monitors and deployment of a gunfire direction finders.

Armenia and Nagorno Karabakh have both expressed support for these life-saving initiatives; Azerbaijan has not.

“Why are the snipers not pulled back? […] Why have we not deployed those special [gun fire] direction finders?” asked Chairman Royce, citing reports of unprecedented Azerbaijani tank fired shelling and high-powered rifle fire, which claimed the life of 24-year-old Garik Gurgen Avanesyan.

Chairman Royce concluded his remarks, noting “I retain hope that one day the people of Nagorno Karabakh will be able to live in peace, enjoying security and a flourishing trade with its neighbors in the region, and I give thanks to those of you here who are committed to that peace and who are committed to stay engaged to see that that happens.”

“We were pleased to have so many ANCA activists fly in from across America to Washington for this special celebration of Artsakh’s freedom and commitment to peace,” said ANCA Executive Director Aram Hamparian following the program. “As I said today from the podium, Artsakh is, at its heart, a very American story: the victory of a free people over foreign rule; a people committed to democracy, devoted to freedom, and working for peace – for themselves and all the citizens of the region. It is in this spirit that we recognize Chairman Royce’s principled leadership, thank all those legislators who joined with us today, and welcome Ambassador Warlick’s participation in today’s pro-peace program.”

Hamparian, who joined Congressional Armenian Caucus Co-Chairs Robert Dold (R-IL) and Frank Pallone (D-NJ) as masters of ceremony, welcomed Ambassador Warlick to the program, citing his role as a partner for peace, and an ally in the search for a fair and lasting peace for Nagorno Karabakh and all the citizens of the region.

Pro-Artsakh advocates from across the US converged in Washington DC on December 8th as part of the “ANCA Fly-In for #NKPeace” initiative – a two-day mission to share a message of peace and democracy with U.S. Senators and Representatives, culminating in the December 9th Capitol Hill observance.

Complete coverage of the “ANCA Fly-In for #NKPeace” initiative and Capitol Hill observance will be available in upcoming days on the ANCA website and social media sites.