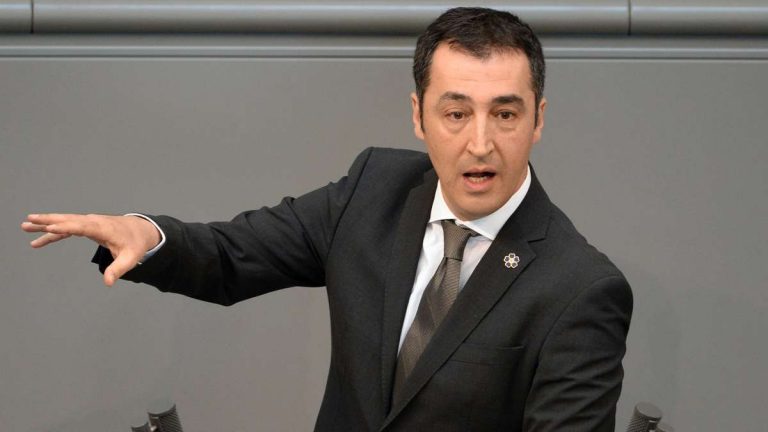 Los Angeles, CA – The Armenian National Committee of America – Western Region (ANCA-WR) announced that Cem Ozdemir, an individual Member of the German Parliament who is of Turkic descent, and the German Bundestag collectively will be honored with the 2016 ANCA-WR Freedom Award for their courage in resisting pressure from the Turkish government to introduce and pass a resolution formally recognizing the Armenian Genocide as well as Germany’s complicity in this crime against humanity.

In an historic and unprecendented show of unity, every political party faction within the German Bundestag as well as the Federal President Joachim Gauck, the President of the Bundestag Norbert Lammert, and Chancellor Angela Merkel all joined together in supporting a motion spearheaded since 2015 by Green Party Chairman Cem Ozdemir under the title: “In remembrance and commemoration of the genocide of Armenians and other Christian minorities in the Ottoman Empire 101 years ago.”

On June 2, 2016, after a delayed vote designed to first secure a deal between Germany and Turkey on the current refugee crisis, the resolution was almost unanimously passed with all 11 Bundestag members of Turkish descent voting in favor, and only one no vote and one abstention.

In presenting the resolution, Mr. Ozdemir stated on the floor, “There is never a good time to speak of something so inconceivably barbaric as genocide. After lengthy and laborious deliberations, we are voting today on a motion that speaks of genocide, clearly refers to German complicity and establishes that this complicity virtually binds Germany to work for the normalization of relations between Turkey and Armenia and for rapprochement between the two countries.”

Addressing concerns expressed by some that Germany should avoid angering Turkey while they are both dealing with the Syrian refugee crisis, Ozdemir went on to state, “Ladies and gentlemen, the fact that we were accessories in the past to this dreadful crime must not mean that we aid and abet those who deny it today. Coming to terms with the Shoah has been the foundation of our democratic Germany. It is therefore time for us to come to terms now with other crimes committed by predecessor states of the Federal Republic of Germany.”

Cem Ozdemir’s personal history made his mission even more significant. Born in Germany in 1965 to Turkish-Circassian parents who had immigrated from Turkey to Germany as so-called guest workers and calling himself a “secular Muslim,“ Ozdemir has always been a true champion of human rights.

An educator by profession, Mr. Ozdemir was elected to the German Parliament in 1994, becoming its first member of Turkish descent. He served two consecutive legislative terms from 1994 to 2002, during which he held the position of Speaker on Internal Affairs for the Green Parliamentary Group. In 2003, Mr. Ozdemir became a Transatlantic Fellow at the German Marshall Fund in Washington DC and Brussels, during which he developed research on the ways that minority groups in the United States and Europe organize themselves politically.

From 2004 to 2009, Mr. Ozdemir was a member of the European Parliament, where he was Speaker on Foreign Affairs for his political group The Greens/European Free Alliance.

In 2011, Mr. Ozdemir was named as one of 100 Global Thinkers by the prestigious Foreign Policy journal. He is a founding member of the European Council on Foreign Relations and sits on the advisory board of the American Jewish Committee’s Berlin office.

Mr. Ozdemir is the author of two books on multicultural Germany. In 2008, he published a book titled Turkey: Politics, Religion, Culture. He regularly writes commentaries and articles for German, Turkish and international media.

In 2015, Mr. Ozdemir traveled to Armenia on the occasion of the Armenian Genocide Centennial and formally declared recognition of the Genocide, calling upon Turkey to do the same. Shortly thereafter, he introduced a resolution in the German Bundestag not only to declare Germany’s formal recognition of the Genocide but also to acknowledge its own indirect involvement by failing to hold its Ottoman Turkish ally responsible as the atrocities were occurring.

During World War I, German Imperial Chancellor Theobald von Bethmann Hollweg was quoted by Ozdemir, as stating ‘‘Our sole object is to keep Turkey on our side until the end of the war, no matter whether or not Armenians perish as a result.“ By 1918, although German military leaders knew that 90% of the entire population and 98% of the male population of Armenians had been killed in the eastern provinces with the clergy almost entirely exterminated, they did nothing to stop the atrocities.

Mr. Ozdemir drew the connection to modern times as well, by stating, “When we look at the region today, we see that Christians are once again being persecuted – in Iraq, in Syria and in Turkey too. Those displaced Armenians who survived the death marches arrived in places which are now in the middle of the Syrian war zone, such as Aleppo and Deir-el-Zor. After a number of years in which all of us in this House have had reason to rejoice at the restoration of churches in Turkey, churches are now being expropriated and closed down again. What is perhaps the bitterest pill is that, while ‘You Armenian‘ has always been used as a term of abuse in Turkey, today it is more widely used than ever. Even I am addressed as ‘You Armenian.‘ I do not regard it as an insult to be called an Armenian.“

Bundestag President Norbert Lammert, a Christian Democrat from Merkel’s ruling party, labeled the Ottoman Turkish treatment of its ancient Christian Armenian minority as genocide last year on the occasion of the Centennial. At that time, he stated that Germans know well that working through past events is the only way to achieve reconciliation and cooperation, a lesson learned by Germany’s own chapters of dark history. When the resolution was presented on the floor of the Bundestag by Cem Ozdemir, President Lammert started the debate by stating that while “the current Turkish government is not responsible for what happened 100 years ago, it does have responsibility for what becomes of this in present times.“ One after another, Members of Parliament from various political factions took the floor to express support for Armenian Genocide recognition based on Germany’s own historical lessons of taking responsibility for the Holocaust and the need to acknowledge Germany as an accomplice to the crime of genocide by its ally, Ottoman Turkey.

“Cem Ozdemir and the German Bundestag are well-deserving of our highest praise for their courage in shepherding the Armenian Genocide resolution through successful passage even in the face of unimaginable pressure from their past and current ally, the denialist Turkish government. Their honesty and transparency in accepting responsibility for their own predecessors’ complicity in this unpunished crime is truly commendable as it empowers the truth and facilitates justice. It is our sincere hope and expectation that U.S. executives and lawmakers will take the example of their German counterparts by acknowledging the noteworthy American role in rescuing hundreds of thousands of Armenian Genocide survivors rather than allowing a foreign Turkish government to dictate the policies of the United States with empty threats of retaliation for speaking the truth and demanding accountability to the victims and their descendants, just as Germany has done for the survivors of the Holocaust and now of the Genocide,” stated ANCA-WR Chair Nora Hovsepian, Esq.

After passage of the June 2, 2016 resolution, Turkey predictably declared the vote null and void and recalled its ambassador, expressing anger over Germany’s action. However, it even went one step further by refusing German lawmakers access to German NATO soldiers stationed at the Incirlik Air Base near the Syrian border unless the German government distanced itself from the Bundestag’s Armenian Genocide resolution.

The German Foreign Minister Frank-Walter Steinmeier did not take kindly to this Turkish threat and flatly rejected Ankara’s demand, adding that if Turkey continues denying German lawmakers access to the airbase, German troops dispatched there to fight ISIS will be withdrawn. In recent weeks, this crisis was alleviated when Turkey finally granted permission to the German representatives to visit their soldiers after Steinmeier stated the obvious that the resolution passed in the Bundestag was by definition not legally binding.

In the past, despite Turkish threats against other NATO allies such as France who recognized the Armenian Genocide, the strain on bilateral relations was only temporary just as it was with Germany.

Since taking this most courageous action, Cem Ozdemir and his Turkish-German colleagues in Parliament have received death threats requiring police protection as well as threats from the Turkish President Recep Tayyip Erdogan who claimed that the 11 Bundestag lawmakers of Turkish descent who voted for the resolution are probably not even true Turks, suggesting that they should have their blood tested to be sure. Yet, despite these threats, Mr. Ozdemir’s perspective was to promote democratic principles which are currently lacking in Turkey by proclaiming: “I am grateful to the President of the Bundestag for referring to the fact that Members of the Bundestag must not be subjected to threats on account of their opinions. But I find it difficult to speak of this here, ladies and gentlemen, because I know that, when I leave the Bundestag after this sitting, I shall not be arrested, that on my way home my immunity is unlikely to be lifted and I shall not be beaten up or killed. The same does not apply to our counterparts in Turkey. It does not apply to those in Turkey who are calling for the examination of these crimes. That is why our solidarity is with those people. They truly have reason to be afraid. They are paying a high price.”

Cem Ozdemir has expressed his deep gratitude to the ANCA-WR for being the recipient of the Freedom Award and will accept it via video presentation at the Banquet.

The 2016 ANCA WR Annual Gala Banquet will be held on Sunday, October 16, 2016 at the Westin Bonaventure Hotel in Los Angeles, California. The main event will begin at 4:30p.m. with cocktails, hors d’oeuvres, and a silent auction. A three-course dinner will follow at 6:00 p.m. with a powerful program and presentation of the awards.

Individuals interested in attending and sponsoring the Annual Gala Banquet are encouraged to purchase tickets online at www.ancawrgala.org or call (818) 839-1918. To obtain corporate sponsorship information visit www.ancawr.org/gala/sponsorship or call (818) 500-1919. For up to the minute updates on the event follow ANCA Western Region on social media: facebook.com/ANCAWesternRegion, Twitter and Instagram: ANCA_WR

The ANCA-WR Gala Banquet represents the single largest annual gathering of Armenian American public policy leaders throughout the western United States, and is attended by over 1,000 prominent Members of Congress, state legislators and officials, community leaders, and many of the organization’s strongest activists and generous donors from California, Nevada, Arizona, and throughout the western United States.