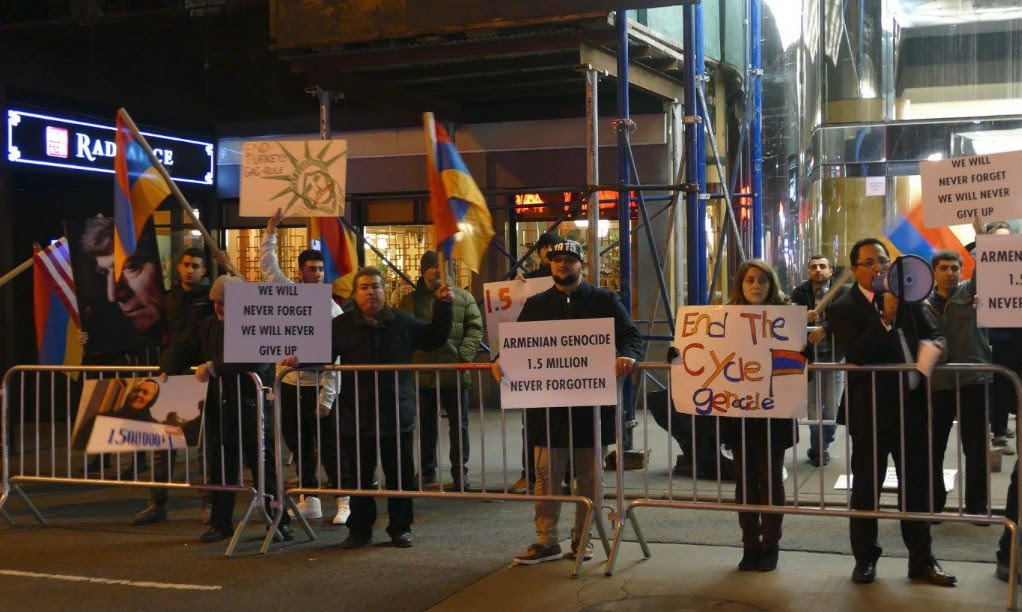 Dozens of community members and supporters, holding Armenian flags, signs, and images of Dink, gathered across from the Turkish Consulate in midtown Manhattan. They called for justice with chants such as “We Are All Hrant Dink,” “Justice for Hrant Dink,” and “Turkey Recognize Your Guilt.”

The candlelight vigil began with an opening prayer by V. Rev. Fr. Zareh Sarkissian and Rev. Fr. Mesrob Lakissian, the pastor of St. Illuminator’s Armenian Cathedral. As the participants held candles, the priests and deacons led the singing of Hayr Mer, Der Voghormya and Kilikia.

Speaking on behalf of the community, ANC-NY chairman Nazareth Markarian and writer Taleen Babayan addressed the crowd of supporters and passerbys.

“Hrant Dink was murdered in cold-blood on the streets of Turkey, in broad daylight, because he had the courage to stand up for truth and because he would not remain silent about the Armenian Genocide,” said Markarian, who urged the Armenian community to never forget and reminded those present that Turkish abuses continue to this day.

“Turkey continues to violate its citizens’ right to life and freedom of speech and has intensified its crackdown of political opponents. Just a few days ago, Garo Paylan, an elected official to Turkey’s Parliament, was suspended and banned from Parliament. It is our duty to remain vigilant and raise our collective voice in support of Paylan, who like Hrant Dink before him, refuses to be silenced in his fight for human rights and Turkish acknowledgment of the Armenian Genocide,” said Markarian.

In her remarks, Taleen Babayan noted that “Dink was a journalist in the truest sense, whose convictions and morals guided him, nd who was led by the motives of truth, justice, and progress. He was someone who did not just advocate for Armenian Genocide awareness but who advocated for all marginalized people in Turkey. He was not just a symbol for Armenians, he was a symbol for every oppressed individual around the world.”

“Today, a decade after Hrant Dink’s assassination, not much has changed in Turkey. The systematic persecution of religious and ethnic minorities continues. But we have hope for a better future. Hrant gave us that hope. We are here, Ahparig [brother],” read a part of a statement released by the ANC-NY.