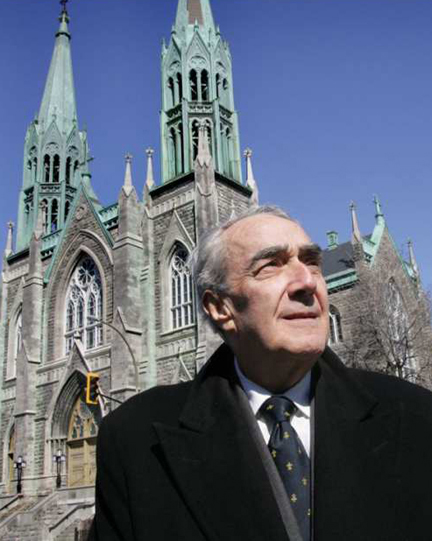 Ottawa – It was with deep sadness that the Armenian National Committee of Canada learned about the passing of long-time Senator and former Member of Parliament, Marcel Prud’homme, who passed away peacefully at age 82.

The Montreal area politician who first entered politics in 1964 was re-elected eight times as Member of Parliament for the riding of Saint-Denis. Upon his resignation as MP in 1993, he served as an independent Senator until his retirement in 2009. Sen. Marcel Prud’homme was a staunch supporter and a major driving force behind Canada’s recognition of the Armenian Genocide.

“The passing of Sen. Marcel Prud’homme is a great loss for all of Canada and for the Armenian-Canadian community” said Shahen Mirakian, president of the Armenian National Committee of Canada.

“His honesty, courage, and the strong and principled stance that he always took against any issue of human rights will be truly missed” said Mirakian.

In 2004, the Armenian National Committee of Canada hosted a reception at the Armenian Community Center of Montreal in honor of Sen. Marcel Prud’homme’s 40th year in public service. As a token of appreciation, Prud’homme was given a work of art created entirely with flower petals signifying the Armenian community’s heartfelt appreciation for his steadfast support throughout the years.

The ANCC mourns the passing of Sen. Marcel Prud’homme and expresses its deepest condolences to his family and friends.

(HORIZON WEEKLY) OTTAWA — Marcel Prud’homme, the straight-talking former canadian senator and Quebec MP whose career in federal politics spanned 45 years, has died at the age of 82.

The Montreal-born politician entered federal politics in 1964 when he was elected as a Liberal MP in the Montreal-area riding of Saint-Denis.

He was re-elected eight times before resigning to serve as an independent member of the Senate from 1993 until his retirement in 2009.

Over his years in government Prud’homme became known as a straight-talker and ardent defender of the Palestinian cause, which gained him both admiration and criticism from his peers.

Prud’homme served under nine prime ministers and sat on a number of Senate and parliamentary committees.

In 2004, the Armenian National Committee of Canada hosted a reception at the Armenian Community Center of Montreal in honor of Sen. Marcel Prud’homme’s 40th year in public service. As a token of appreciation Prud’homme was given a work of art created entirely with flower petals depicting an Armenian scene. Presenting the work was Dr. Girair Basmadjian president of the Armenian National Committee of Canada who said “When our community was still young Sen. Prud’homme was our only friend in Parliament and was always present at all our events and commemorations of the Armenian genocide.”