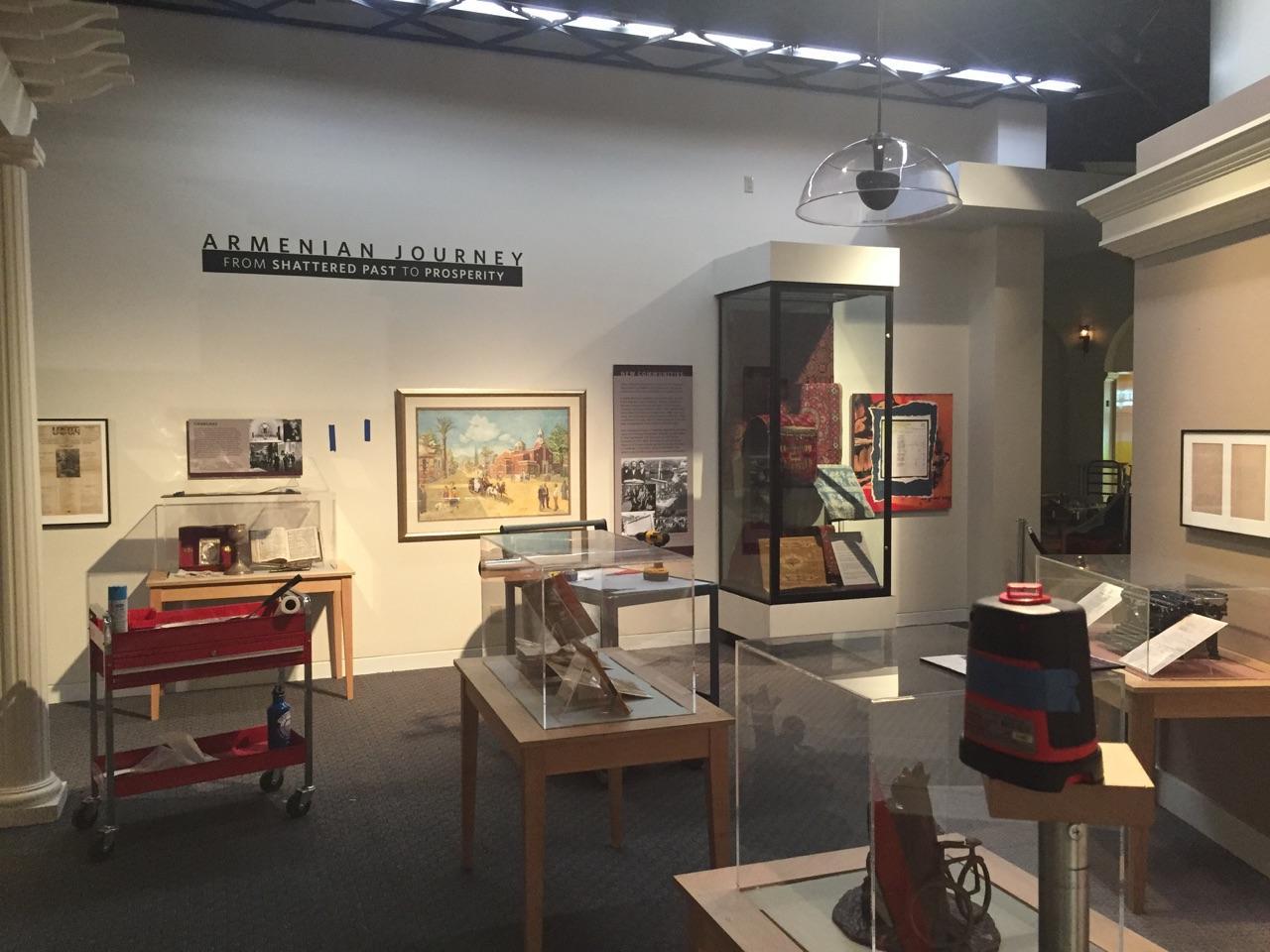 On Wednesday, March 31, 2015, the California State Museum in Sacramento, opened its landmark exhibit highlighting Armenian history and culture. The exhibit captures the Armenian people’s journey through the Armenian Genocide, Artsakh, and the outstanding contributions of Armenians to California’s culture and history. The exhibit titled Armenian Journey: From Shattered Past to Prosperity comes just 20 days before the Armenian National Committee of America – Western Region’s California Advocacy Day set for April 19-20 and is part of a long list of Genocide Centennial commemorative events sponsored by the California Armenian Legislative Caucus and planned in partnership with the ANCA-WR, with the help of Armenian Museum of Fresno Chair Varoujan Der Simonian at and around the State’s Capitol.

“We are proud to bring together such a unique collection of artifacts which displays Armenian culture and immigration. The “Armenian Journey” exhibit honors those lost in the Genocide, while highlighting milestones throughout our collective journeys to our new home away from our homeland,” stated Assemblymember Nazarian. “Educating communities throughout the Golden State of our people’s journey from persecution to prosperity ensures the past is remembered but never repeated.”

“The Armenian exhibit on display at The California Museum honors the remarkable lives and legacies of whom this great state became not only a place of refuge, but a place to pursue dreams, prosper and thrive. It is due time these remarkable stories honoring the lives of those who so deeply enriched California’s own diverse history are shared with and celebrated by all Californians,” remarked ANCA-WR Executive Director Elen Asatryan. “We extend our deep appreciation to the California State Museum, the California Armenian Legislative Caucus and all those who made this exhibit possible and especially commend Assemblymembers Katcho Achadjian, Adrin Nazarian and Scott Wilk for their leadership and dedication to ensure the success of this poignant and highly-informative project,” added Asatryan.

Pulitzer and Academy award-winning author William Saroyan, California Governor George Deukmejian, and Academy and Grammy award-winning actress and singer Cher Sarkisian are just a few of the notable Armenians highlighted in the exhibit amongst other significant contributions made by Armenians across industries such as agriculture, medicine, religion, entertainment, technology, and the arts. According to the California State Museum website “Original art, historic photographs, cultural objects and rare artifacts illustrate the significant achievements of Armenian Californians from the farms of Fresno to the stages of Hollywood and the halls of government in Sacramento.”

“The California Museum thanks the California Armenian Legislative caucus for partnering with us to bring this compelling story of survival and the California Dream to our audience. The California Museum strives to tell the story that is not often available in text books or known by the general population, but are by their nature the fabric of our culture and society. This story is a prime example,” stated California State Museum Executive Director Dori Moorehead.

Over a period of 15 years from 1915 to 1930, the NER successfully saved over 1,000,000 refugees and 132,000 orphans of the Armenian Nation and other Christian minorities half a world away. Despite its initial fundraising goal of $100,000 which was later raised to $30 million, the NER ultimately raised $117 million, the equivalent of $2.7 billion in today’s dollars.

“Armenian Rugs Society commends the management team of Californian Museum for undertaking the planning of the exhibit titled ‘Armenian Journey: From Shattered Past to Prosperity’—A truly remarkable presentation of cultural objects reflecting the life of Armenian immigrants and highlighting their contributions to the State of California,” stated Armenian Rugs Society President Hratch Kozibeyokian. “For the realization of this exhibit ARS has gladly provided two historical carpets woven by the Armenian orphans in the orphanages of Aintab and Ghazir and an assorted authentic samples of antique hand woven textiles and embroideries unique to the Armenian culture,” added Kozibeyokian.

The exhibit will remain open through August 2, 2015.

A special tour of the exhibit has been scheduled on Monday, April 20, 2015 during the ANCA WR CA Advocacy Day. For individuals/groups from the Los Angeles area who are interested in participating in the CA Advocacy Day and viewing the exhibit, bus transportation to and from Sacramento as well as lodging will be provided. The bus will depart on Sunday, April 19, 2015 at 9AM and will return the following evening on Monday, April 20, 2015. The last to register for Advocacy Day is Saturday, April 11, 2015, 11:59pm. To register, please visit ANCAWR.org/Advocacy Day. For more information about Advocacy Day, visit www.ancawr.org, email CAstate@ancawr.org or call (818) 500-1918.