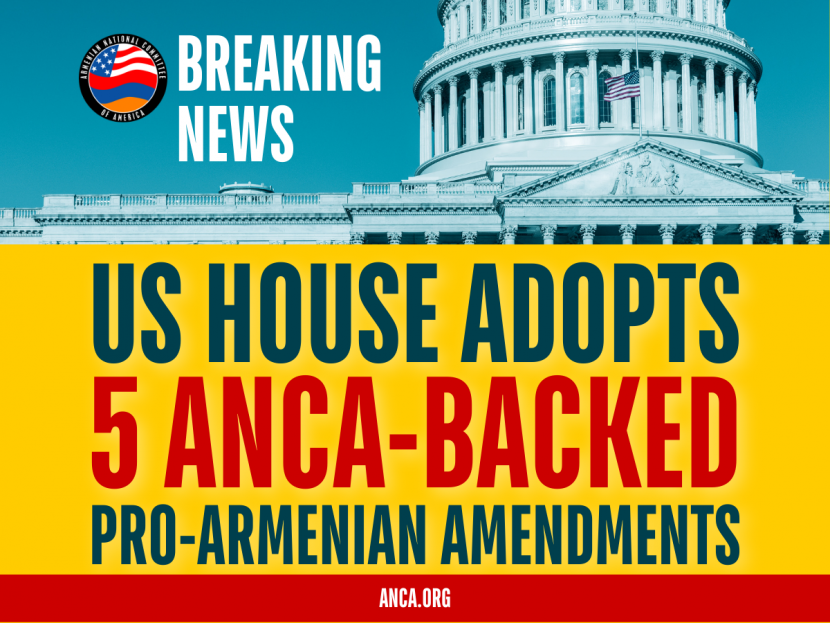 The measures were adopted by voice vote on Wednesday and Thursday of this week, as part of larger groupings, or blocs, of amendments to the National Defense Authorization Act (NDAA – H.R.4350).  The U.S. House is expected to pass the underlying NDAA measure on Thursday on a largely party-line vote.

“The U.S. House of Representatives – over intense Turkish and Azerbaijani lobbying, but without any vocal legislative opposition – voted overwhelmingly today to hold Ankara and Baku accountable for their attacks on Artsakh last fall and ongoing aggression against Armenia,” said ANCA Executive Director Aram Hamparian. “We join with our coalition partners and countless community activists to thank the authors of these ANCA-backed amendments – and all those who supported their passage –  and are already at work ensuring that these principled and powerful stands are enacted into U.S. law and translated into American policy.”

The first amendment, led by Representatives Tony Cardenas (D-CA), Adam Schiff (D-CA), and Brad Sherman (D-CA), states it is the sense of Congress that “Azerbaijan must immediately and unconditionally return all Armenian prisoners of war and captured civilians.”  It goes on to demand a report from the Secretary of Defense on the use of U.S. technology in Turkish drones used by Azerbaijan to attack Armenia and Artsakh during the 2020 war.  The report would also detail the use of illegal munitions and chemical weapons, including white phosphorus, against Armenian civilians.  The bi-partisan amendment was also cosponsored by Representatives Gus Bilirakis (R-FL), Judy Chu (D-CA), Anna Eshoo (D-CA), Young Kim (R-CA), Raja Krishnamoorthi (D-IL), Andy Levin (D-MI), Zoe Lofgren (D-CA), Frank Pallone (D-NJ), Katie Porter (D-CA), Janice Schakowsky (D-IL), Jackie Speier (D-CA), Dina Titus (D-NV), and David Valadao (R-CA).  The full text of the amendment is available here: https://amendments-rules.house.gov/amendments/CARDCA_036_xml210920102639182.pdf

“It is critical that we get a full accounting of the facts as we look to hold Azerbaijan accountable for its actions in Nagorno Karabakh last year,” said Rep. Cardenas.  “I am glad to have worked closely with Reps. Schiff and Sherman to produce an amendment that does exactly that. This report is critical to getting a clear picture of the extent of Azerbaijan’s actions and any potential violations of international law. Additionally, it will make clear that the United States Congress expects Azerbaijan to honor its obligation to carry out the unconditional return of any remaining Armenian prisoners of war safely to Armenia. I am thankful for the bipartisan group of cosponsors that has joined us in this effort, and will work hard to see that the report gets done.”

Rep. Schiff concurred, adding, “It is unconscionable that as we approach the one-year anniversary of the war in Nagorno-Karabakh, Azerbaijan continues to illegally detain Armenian service members and captured civilians – a reality made even more horrific by ongoing reports that these prisoners of war are subject to torture in violation of international human rights conventions.”  Rep. Schiff went on to note, “With this amendment, we are making it absolutely clear to the Aliyev regime that they have the obligation to release these prisoners immediately and unconditionally, and that the Biden administration should take every possible diplomatic action, including through the OSCE Minsk Group, to hold them to account.”

“This amendment is critical in our efforts to hold Azerbaijan accountable for its heinous acts of aggression last year against the people of Armenia and Artsakh,” said Rep. Sherman. “I was pleased to work with Congressmen Cardenas and Schiff and many others on this amendment that aims to uncover the full extent of Azerbaijan’s actions, and sends a strong message calling on Azerbaijan to honor its obligation for the unconditional and safe return to Armenia of any remaining Armenian prisoners of war.”

The second amendment led by Rep. Frank Pallone (D-NJ), requires a report from the Secretary of Defense, in collaboration with the Secretary of State, addressing allegations that some units of foreign countries that have participated in security cooperation programs under section 333 of title 10, U.S.C. may have also committed gross violations of internationally recognized human rights before or while receiving U.S. security assistance. Since 2016, Azerbaijan has received over $120 million in U.S. military assistance under section 333 funding, and would be in the list of countries scrutinized for committing human rights violations during and after the 2020 Artsakh War.

Speaking on the House floor, Rep. Pallone explained, “Azerbaijan was still receiving equipment and training from the US military that began a deadly attack against Nagorno-Karabakh (Artsakh) on September 27 that led to the death of thousands and the displacement of so many more.”  He went on to explain, “passage of this amendment sends a clear signal that the US takes seriously its democratic norms and commitment to peace by ensuring oversight of our security assistance and I hope at least in future restraint from aiding and tolerating similar regimes in the future, especially when their actions are aimed at destabilizing a fellow democracy.”

Rep. Dina Titus (D-NV) led a fourth amendment requiring a report by the Secretary of State on the activities Turkey’s Grey Wolves organization has undertaken against U.S. interests, allies, and international partners, including a review of the criteria met for designation as a foreign terrorist organization.  The amendment had the support of a coalition of organizations including the Hellenic American Leadership Council, In Defense of Christians, American Friends of Kurdistan, Middle East Forum, as well as the ANCA, which circulated a detailed legislative brief to Congress in the days leading up to the vote.  The legislative brief is available at: https://anca.org/ndaa-legislative-brief-designating-turkeys-grey-wolves-a-foreign-terrorist-organization/

The Senate is set to consider its version of the National Defense Authorization Act over the next month.  The ANCA is working closely with Senate Armed Services Committee and Foreign Relations Committee members to explore amendment opportunities similar to those adopted by the U.S. House and to zero-out U.S. military aid to Azerbaijan.