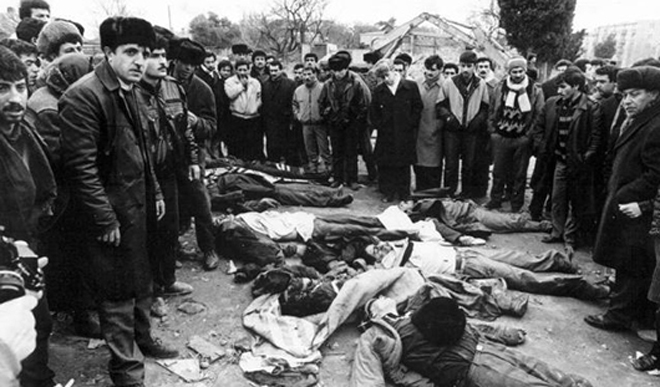 ANCC Statement on the 30th Anniversary of the Sumgait Massacre

Ottawa — Thirty years ago, this week, Azerbaijani authorities organized and systematically committed the mass pogroms and massacres against the peaceful Armenian population of Sumgait. In what was seen as a response to the peaceful manifestation of Artsakh Armenians for self-determination, dozens of Armenians were brutally killed or detained, beaten and tortured.
]

The Sumgait massacre was the first ethnic cleansing campaign that Azeri nationalists committed since the onset of the Karabakh movement which fueled further bloody episodes of ethic cleansings perpetrated by Azeri authorities in Kirovabad, Mingechaur, Baku and elsewhere around Azerbaijan.

“Instead of facing their history and repenting for their monstrous crimes, Azerbaijani authorities spare no effort today to deny their past and shift the international community’s attention in order to escape responsibility” said Shahen Mirakian, president of the Armenian National Committee of Canada.

The massacre claimed the lives of over 36 innocent Armenian men, women and children. Internationally renowned media sources including the New York Times, Washington Post, and many others reported about these heinous crimes committed by Azeri nationalists.

“The international community’s silence is what further encouraged Azeri nationalists to perpetrate their crimes and instill hatred and discrimination against Armenians in the region” said Shahen Mirakian.

As a result of lack of monitoring and international pressure, to this day, Azerbaijan remains committed to its campaign of aggression against Armenians by constantly violating the current ceasefire regime and by making outrageous threats of attacking Armenia proper itself.

“It is the international community’s responsibility to put an end to Aliyev’s bellicose war-mongering and aggression that not only is threatening the political stability of the region, but also causing serious consequences for global peace and security” concluded Mirakian.