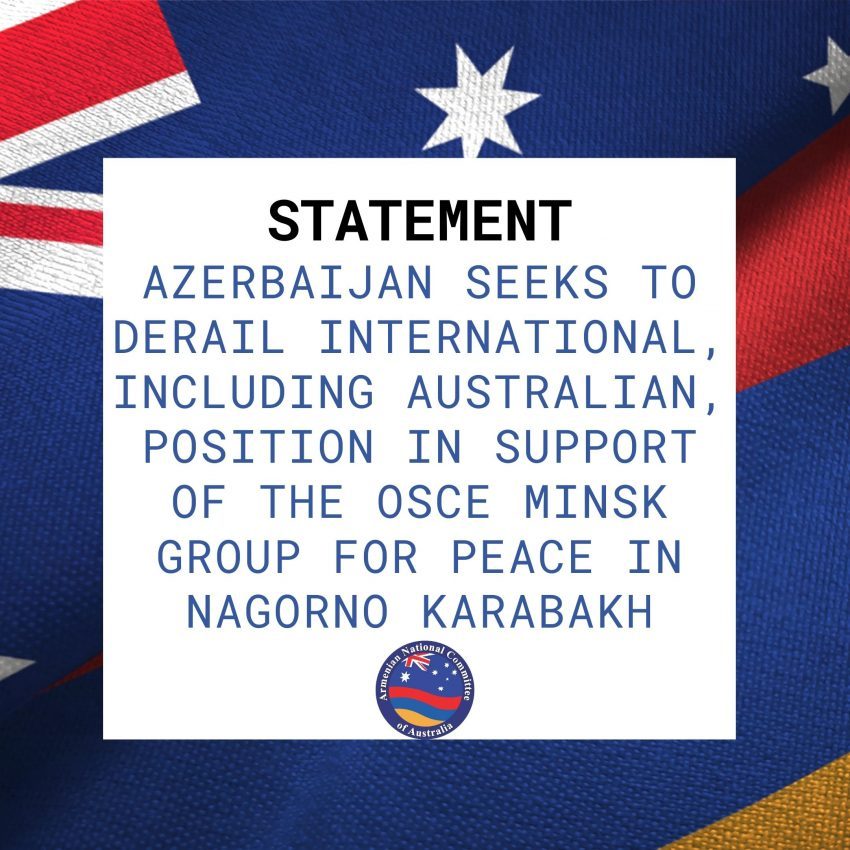 Azerbaijan seeks to derail international, including Australian, position in support of the OSCE Minsk group for peace in Nagorno Karabakh

Azerbaijan’s autocratic President Ilham Aliyev has now openly pledged to derail the activities of the OSCE Minsk Group, which is the UN Security Council endorsed vehicle supported by the international community––including Australia––to bring about a permanent settlement to the Nagorno Karabakh conflict.

Co-Chaired by representatives of Russia, the United States and France, the Minsk Group established in 1992 by the Organisation for Security and Co-operation in Europe (OSCE) remains the only format for the settlement of the Nagorno Karabakh conflict agreed by all sides of the conflict, including the Republic of Armenia, Republic of Artsakh and the Republic of Azerbaijan.

Until Azerbaijan’s Turkish- and Jihadi-supported military aggression in 2020, which resulted in the ethnic cleansing and subsequent occupation of certain regions of the Armenian Republic of Artsakh, the OSCE Minsk Group co-chairs had conducted peaceful negotiations between the parties guided by the Helsinki Final Act’s principles of the Non-Use of Force, Territorial Integrity, and the Equal Rights and Self-Determination of Peoples.

In defiance of the international community and the Nagorno Karabakh peace process, Aliyev has now brazenly declared the OSCE Minsk Group “should not deal with the Nagorno-Karabakh conflict because it is resolved” as a result of Azerbaijan’s recent military aggression. This suggests a clear intention to implement the same occupation, ethnic cleansing and religious/cultural eradication of the native Armenian population and presence it has carried out over the last 14 months for the remaining part of Nagorno Karabakh, which is currently protected by Russian peacekeepers, as his final solution to the indigenous population’s quest for self-determination on their ancestral lands.

Since the beginning of the OSCE Minsk Group’s process, Azerbaijan’s resistance to negotiation and threats of the eventual violence perpetrated in 2020, denigrated the international laws that protect fundamental human rights, including the right to self-determination. Unfortunately, such conduct did not receive the appropriate and necessary rebuke by the international community, which has thereby appeased and continues to appease a clear aggressor and its consistent maligning of human rights norms.

Significantly, many nation states including the Commonwealth of Australia, have used their post-2020 war announcements to voice their unwavering support for the OSCE Minsk Group to bring the Nagorno Karabakh conflict to its final and just negotiated settlement, guided by the aforementioned principles.

In light of the Azerbaijani dictatorship’s stated intention to undermine the OSCE Minsk Group’s Nagorno-Karabakh peace process, the Armenian National Committee of Australia (ANC-AU) calls on the Australian Government to send a clear message to all parties of the conflict by once again reaffirming Canberra’s firm and principled position in support of the OSCE Minsk Group process to deliver a lasting peace to Nagorno Karabakh conflict, guided by the Helsinki Final Act’s principles of Non-Use of Force, Territorial Integrity, and the Equal Rights and Self-Determination of Peoples.

Australia, alongside the international stakeholders which safeguarded the visions of independence for Kosovo and Timor-Leste, must support and engage in the deliberation of a sustainable and peaceful outcome for the rightful quest for self-determination by Nagorno-Karabakh (Artsakh) to ensure that the contest for liberty is never ceded to the authoritarian whims of a petro-dictatorship with a woeful track-record of institutionalised racial discrimination, ethnic cleansing including destruction of cultural and religious institutions as well as a litany of other human rights violations.