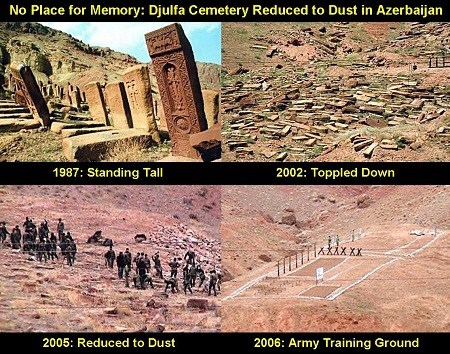 Ottawa – Today, the Armenian National Committee of Canada (ANCC) sorrowfully marks the 13th anniversary of Azerbaijan’s destruction of the historic Armenian cemetery of Djulfa. The ANCC is calling on the Canadian government to hold Azerbaijan accountable for the systematic destruction of Armenian historical, cultural, and religious sites and monuments.

On December 10, 2005, in the framework of a state-sanctioned policy of hate and destruction, the government of Azerbaijan began its demolition project of the historic Armenian cemetery in Djulfa, an ancient Armenian city now located in Azerbaijan. This marked the final blow to the 10,000 intricately hand carved khachkars (stone crosses) which were erected since the 6th century all the way through the 17th century. Through khachkars is expressed a unique Armenian art form of stone carving, which UNESCO has recognized the cultural and religious significance to the Armenian people. Its beauty, detail, and importance are part of humanity’s shared intangible cultural heritage, and the khachkars have been identified to need urgent safeguarding.

By December 15, 2005, the final destruction was complete. Approximately 200 Azerbaijani soldiers gathered at the Nakhichevan-Iran border to desecrate the remaining grave markers at the Djulfa Armenian cemetery. The cemetery has since been replaced with an Azerbaijani military training base.

Despite clear evidence and condemnation by international bodies such as the European Parliament and International Council on Monuments and Sites, Azerbaijani authorities continue to deny this crime, while still promoting the destruction of all Armenian religious and cultural sites in the country.

Shahen Mirakian, President of the ANCC, stated, “As if Azerbaijan’s continuous aggression towards the Republics of Armenia and Artsakh are not enough, their brazen denial of this heinous cultural crime comes to add insult to injury. This is not a behaviour that we, nor the international community, should stay silent about.”