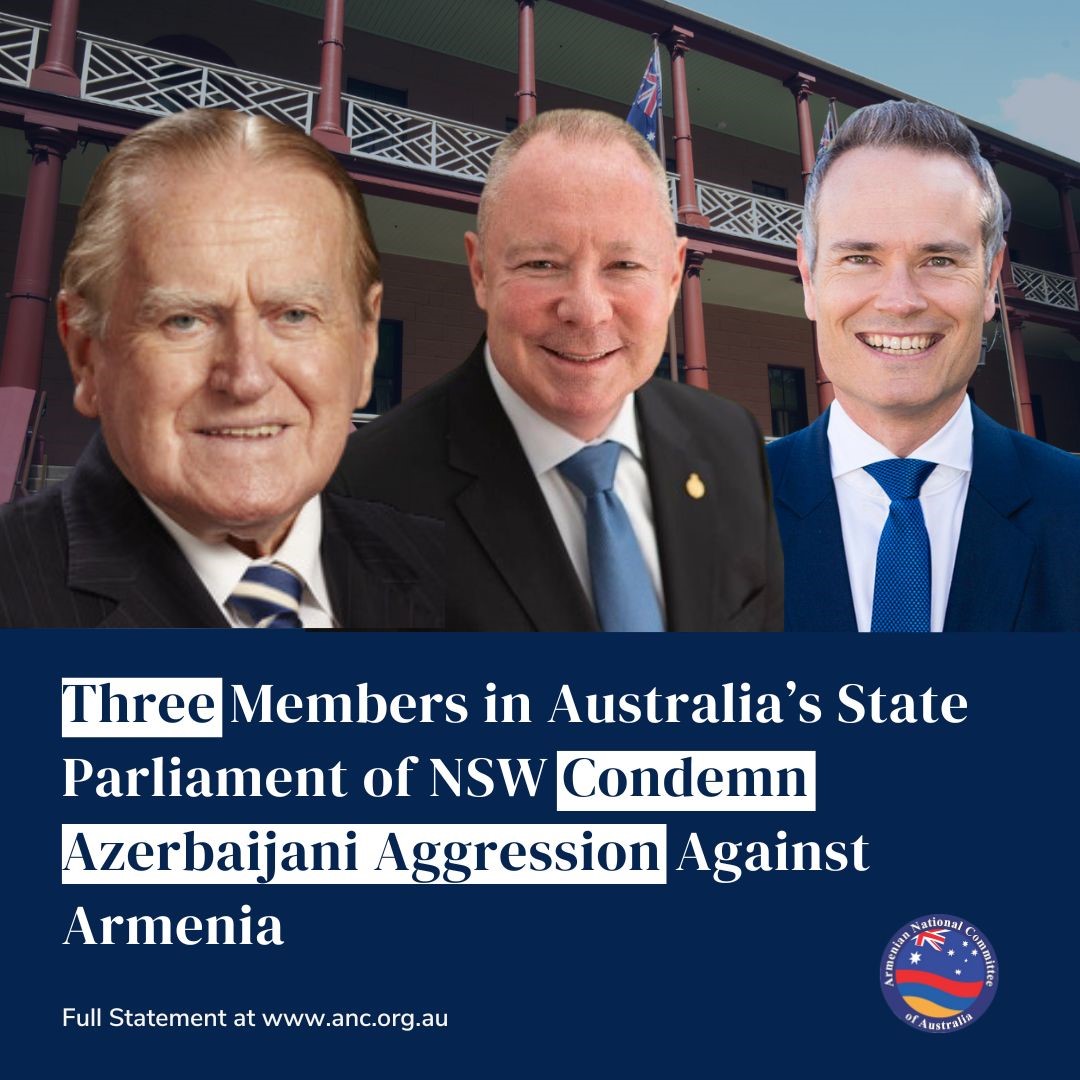 All three parliamentarians, who are members of the NSW Australia-Armenia Parliamentary Friendship Group and Australian Friends of Artsakh network, delivered wide-ranging members’ statements whilst making reference to the unprovoked military attacks against civilian settlements and civilian infrastructure inside Armenia, which commenced on the 12th September 2022 and resulted in the death of over 200 Armenian soldiers, four Armenians civilians and displacing 7,600 persons.

On Tuesday, 20th September 2022, the Member for Willoughby, Tim James rose first to speak on Armenian-Australian issues this week.

James rose in the NSW Legislative Assembly, first congratulating the people of the Republic of Artsakh on the 31st Anniversary of their independence and also praised the Armenian-Australian community living in Willoughby and across Australia.

James later went on to speak of Azerbaijan’s aggression against Armenia in the chamber.

“Earlier this month there were reports of Azerbaijani armed forces shelling villages within the Republic of Armenia. I publicly condemned this attack on Armenia by Azerbaijan and urged our Minister for Foreign Affairs in the Federal Parliament to call out the violation of the ceasefire. It must be stopped,” James said.

“Even parts of the Republic of Armenia are now under attack—an illegal occupation by Azerbaijan—and only recently in the first weeks of September this year more Armenian soldiers and civilians were killed by Azeri aggression,” McDermott said.

“In the first large-scale escalation since the 2020 war, hostilities erupted along multiple parts of the border and included heavy Azeri shelling and drone strikes against civilian settlements and key towns inside Armenian territory. The ceasefire that was agreed on the second day of fighting remains fragile and could easily collapse into renewed clashes, with Azeri forces potentially taking over more territories inside Armenia. As of today, 207 soldiers and three civilians have been killed, and some 7,600 men, women, and children have been displaced,” McDermott added.

McDermott went on to condemn Australia’s Ambassador to Turkey for sanctioning and promoting a diplomatic mission to the currently occupied city of Shushi and called for the Ambassador to be “recalled” and “disciplined”.

On Wednesday, 21st September 2022, Rev. Fred Nile, the longest serving member of the New South Wales parliament rose in the NSW Legislative Council and addressed Azerbaijan’s attacks against Armenia and Artsakh fearing a repeat of the 1915 massacres against the indigenous Christian Armenians of Anatolia.

“My fear is that if the international community fails to hold Azerbaijan and Turkey accountable, we will revisit the atrocities of 1915 to 1922 where 1.5 million Armenians were massacred at the hands of the Ottoman Empire and millions more became refugees,” Nile said.

“Only as recently as September 2022 the current Turkish President, Erdogan, threatened, ‘We may come suddenly in the night’ and, ‘Do not forget Izmir’, which is Smyrna in Greek, referring to the 1922 massacre of Armenians and Greeks in the harbourside city in Asia Minor,” Nile added.

“On behalf of the Armenian-Australian community, we express our sincere thanks and are eternally grateful to Mr James, Dr McDermott and Rev Nile for voicing our community’s frustrations. The Australian Government may be silent, but we take comfort in the principled stance of our friends, and their ongoing efforts to bring awareness to Azerbaijan’s latest illegal and brutal attacks against our homeland,” said Kolokossian.