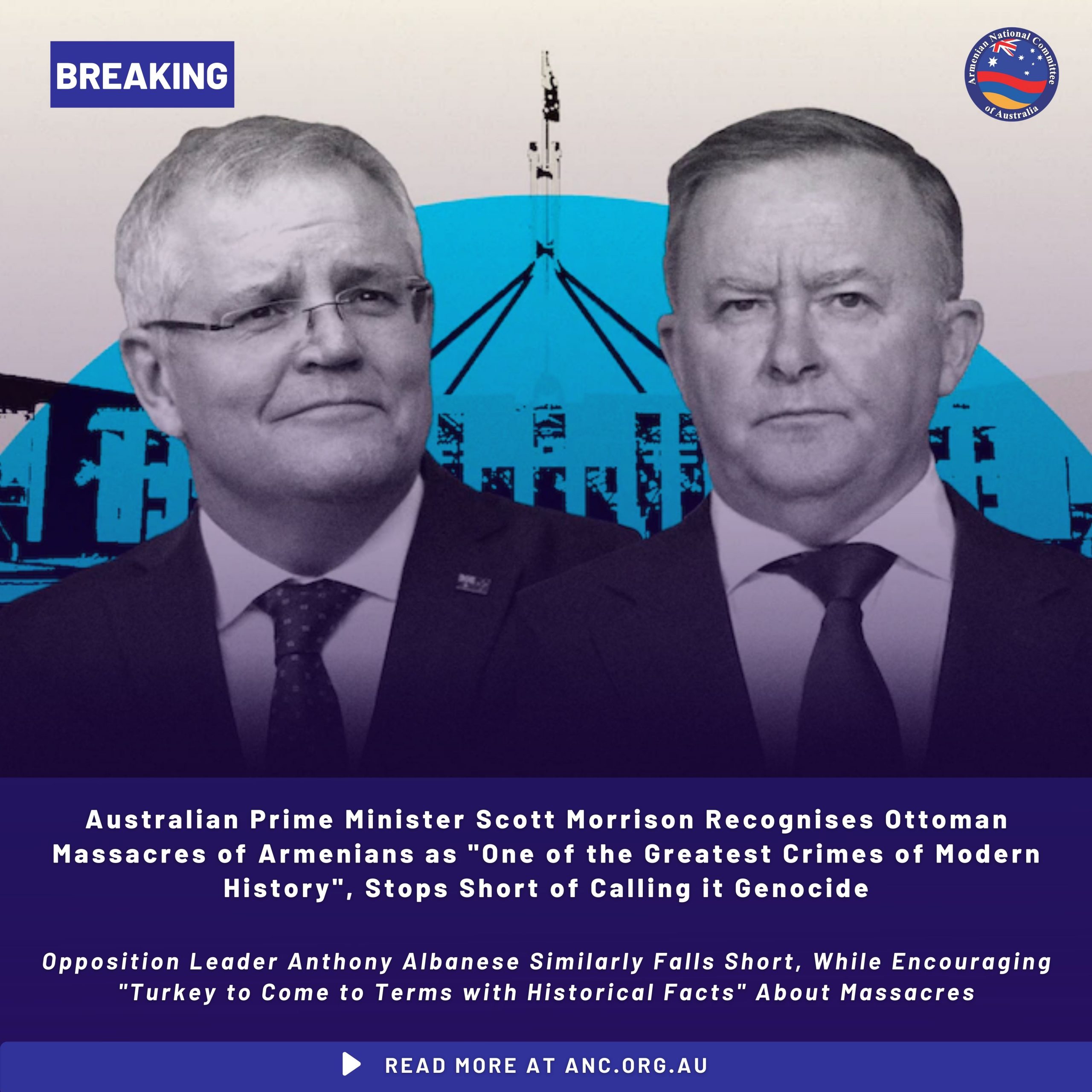 Australian Prime Minister Scott Morrison recognises Ottoman massacres of Armenians as one of the greatest crimes of modern history, stops short of calling it Genocide 

The Armenian National Committee of Australia (ANC-AU) has received statements from Prime Minister Scott Morrison and Opposition Leader Anthony Albanese on the date marking the 107th anniversary of the Armenian Genocide, in which the leaders of Australia’s two major parties go to great extents to describe the actions of the Ottoman Empire in 1915 – using words like “massacres”, “deportations”, “deaths”, “expulsions” and “crimes” – but falling short of characterising these events as “genocide”.

Prime Minister Morrison, who in 2021 expanded on previous statements by using the terms “dispossession, deportations and deaths” to describe the experiences of Armenians in 1915, added descriptors like “massacres” and “expulsions” to his 2022 statement, in which he significantly acknowledged “the plight of the Armenian people” as “one of the great crimes of modern history”.

“Australians were deeply stirred, and there was an outpouring of material and practical support for the Armenian people,” the Prime Minister’s statement continued, recognising Australia’s first major international humanitarian relief effort to aid survivors of the Armenian Genocide.

“Australia’s charity could not bind up every wound, nor wipe away every tear. But our nation responded with sincerity, courage and compassion.”

Opposition Leader Albanese, in his first statement since taking the leadership of his party, similarly commemorated “the deportation, massacre and death of Armenian people” in 1915.

“This time last year, the Labor Party noted the decision of (United States) President (Joe) Biden to recognise the atrocities committed against the people of Armenia in 1915 by the Ottoman Empire as genocide,” Mr. Albanese’s statement read.

“After 107 years of suffering and displacement, this is an important issue for which the Armenian community – including in Australia – have advocated for many years. A Labor Government will engage thoughtfully and respectfully with diaspora communities in Australia and our international partners on this issue.”

Mr. Albanese added: “We continue to encourage the Turkish Government to come to terms with the historical facts about the events of 1915, both to achieve reconciliation with Armenian communities across the world and to resolve their historical differences. There can be no true moving forward without reconciliation. I am hopeful it can be achieved. History cannot be undone, but with the acceptance of truth, however belated, the shadow of the past can at last be pushed out of the present.”

ANC-AU Executive Director Haig Kayserian – who helped lead the #MARCHFORJUSTICE in Sydney and Melbourne on 24th April 2022 as part of the Armenian-Australian, Assyrian-Australian and Greek-Australian Joint Justice Initiative, calling for Australian recognition of the genocides suffered by the three communities’ ancestors at the hands of the Ottoman Turkish authorities – reflected on the statements of the two leaders.

“Whilst we acknowledge Mr. Morrison and Mr. Albanese have got to great lengths to illustrate through their words that they know a genocide took place against the Armenian, Assyrian and Greek people of the Ottoman Empire in 1915, their statements omit the only word that accurately describes those ‘great crimes of modern history’ and which would be acceptable to our three communities in Australia: genocide,” Kayserian said.

“The Joint Justice Initiative of the Armenian-Australian, Assyrian-Australian and Greek-Australian communities pledges to redouble our efforts until the next Australian Government finds the courage to speak truth in the face of interference from a foreign dictatorship that is brazenly unrepentant.”

“We will work night and day until Australia’s government joins most of its parliamentarians, a number of state and local legislatures, and over 30 countries to say that these massacres, crimes, deportations, dispossession, expulsions and deaths were nothing but genocide,” Kayserian added.

Over 20 Australian Federal and State politicians will join the livestream National Armenian Genocide Commemoration event on Tuesday 26th April 2022, 8pm (AEST) to redouble their calls for proper acknowledgement of the Armenian, Assyrian and Greek Genocides (click here for details).