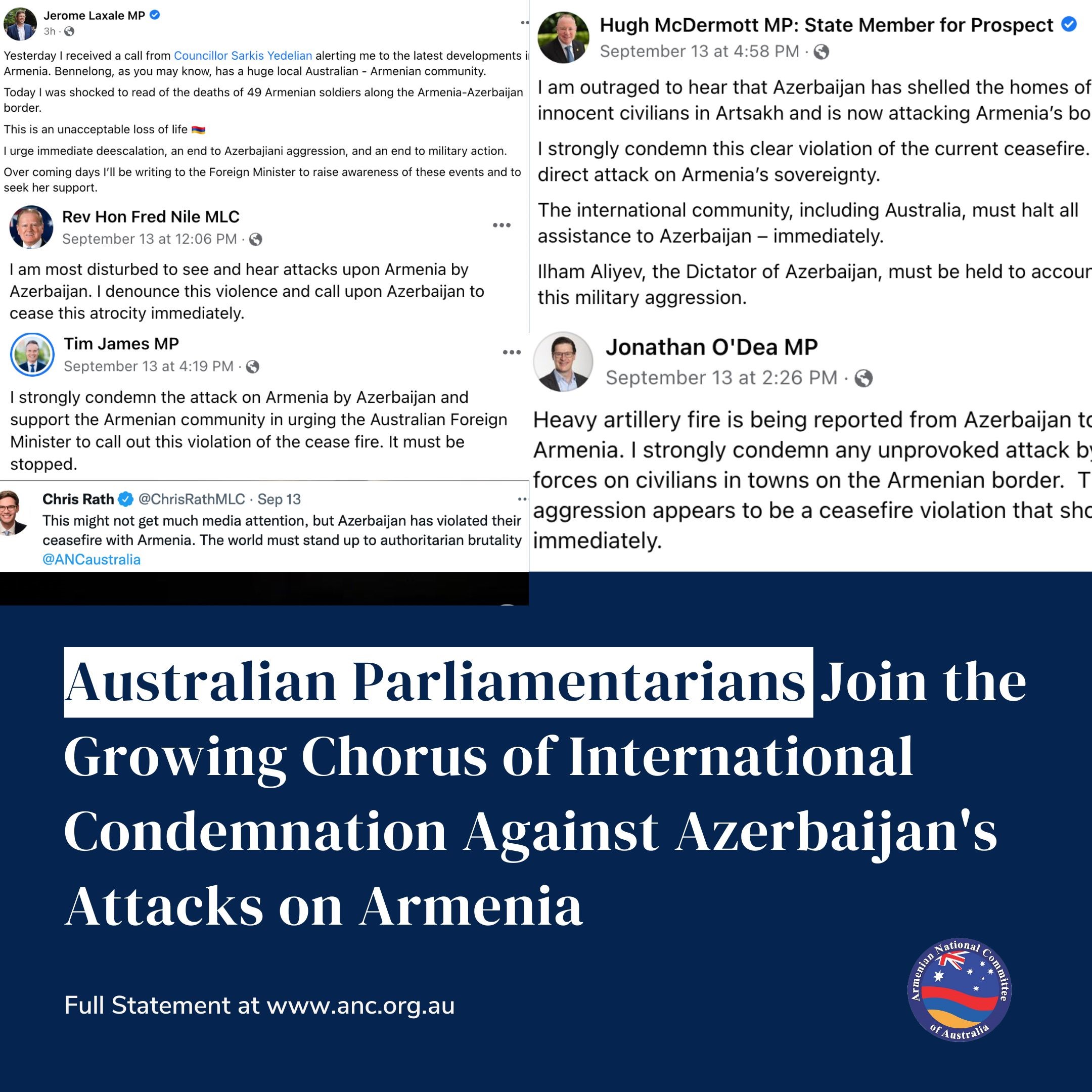 Over the past three days, the petro-dictatorship of Ilham Aliyev launched large-scale military offensives into the Republic of Armenia targeting civilian settlements and military positions in the Gegharkunik, Vayots Dzor and Syunik provinces, resulting in the death of over 100 Armenians.

Laxale, who represents the largest Armenian-populated Federal electorate of Bennelong, took to social media calling for an end to Azerbaijani aggression.

“I urge immediate deescalation, an end to Azerbajiani aggression, and an end to military action,” Laxale posted. “Over coming days, I’ll be writing to the Foreign Minister (Senator Penny Wong) to raise awareness of these events and to seek her support.”

Speaker of the New South Wales Parliament’s Legislative Assembly and Chair of the NSW Friends of Armenia group, Jonathan O’Dea MP added his voice of concern and discontent.

O’Dea wrote: “Heavy artillery fire is being reported from Azerbaijan towards Armenia. I strongly condemn any unprovoked attack by Azerbaijani forces on civilians in towns on the Armenian border.  This aggression appears to be a ceasefire violation that should end immediately.”

The Member for Davidson was joined by fellow state parliamentarians,  Dr. Hugh McDermott MP, Rev. the Hon. Fred Nile MLC, the Hon. Chris Rath MLC, and Mr. Tim James MP, who all raised their voices over Azerbaijan’s attacks against Armenian civilian settlements and civilian infrastructure inside the borders of Armenia.

McDermott, the Member for Prospect, who was added to the persona non grata blacklist of Azerbaijan’s dictator after visiting Artsakh in 2019, said: “I am outraged to hear that Azerbaijan has shelled the homes of innocent civilians in Artsakh and is now attacking Armenia’s border. I strongly condemn this clear violation of the current ceasefire. It is a direct attack on Armenia’s sovereignty.”

“The international community, including Australia, must halt all assistance to Azerbaijan – immediately. Ilham Aliyev, the Dictator of Azerbaijan, must be held to account for this military aggression,” he added.

Nile, also on Aliyev’s blacklist, said: “I am most disturbed to see and hear attacks upon Armenia by Azerbaijan. I denounce this violence and call upon Azerbaijan to cease this atrocity immediately.”

Rath, a recently appointed Member of the NSW Legislative Council, brought to light the international community’s silence in condemning Azerbaijan’s aggression by tweeting: “This might not get much media attention, but Azerbaijan has violated their ceasefire with Armenia. The world must stand up to authoritarian brutality.”

James, the Member for Willoughby, who represents one of the largest Armenian-Australian electorates in Australia’s largest state, called on the Federal Australian Government, in particular Australia’s Foreign Affairs Minister, to condemn Azerbaijan’s latest aggression against Armenia proper.

Similar sentiments were expressed at a local government level, with City of Ryde Mayor Jordan Lane posting: “??A ceasefire is a ceasefire, and must be respected.”

ANC-AU Executive Director thanked all elected representatives who have spoken out against Azerbaijan’s aggression, taking the unheard concerns of the Armenian-Australian community and bringing them to the forefront of public attention.

“Whilst the recent developments have caused extreme concern amongst our community, Armenian-Australians have taken comfort in the statements released by Australian parliamentarians who stand with Armenia and Armenians, and stand against evil forces which attempt eradicate and exterminate Armenians and their presence from their ancient ancestral homeland, as they did in 1915 during the Armenian Genocide,” Kolokossian said.

“It is time for the Australian Federal Government to end its silence and name the aggressor as Azerbaijan, avoiding the pandering both-sideism that is emboldening the Aliyev dictatorship’s campaign of ethnically cleansing the Armenian homeland of its Armenian inhabitants,” added Kolokossian.

The Armenian National Committee of Australia calls on members of the Armenian-Australian community to contact their local Federal Member of Parliament and urge them to condemn Azerbaijan’s criminal activity and attacks against the sovereign borders of Armenia.