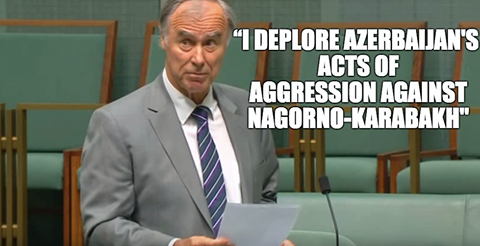 CANBERRA: The Federal Member for Bennelong, John Alexander, has released a statement condemning Azerbaijan’s aggression towards the Republic of Nagorno-Karabakh and the targeting of innocent civilian lives.

“I deplore the recent acts of aggression committed by the Azerbaijan military against ethnic Armenians in Nagorno-Karabakh, with reports of civilians being targeted including the shelling of a school in the Martuni region that resulted in the death of a 12 year old boy and the serious injury of two other children,” Alexander said.

Alexander has spoken in Parliament on several occasions regarding the status of Nagorno-Karabakh, and reiterated in his statement that it is an Armenian-populated Republic with people who “enjoy a democratic system of government, a commitment to human rights and a free press that lies in start contrast to their closest neighbour”.

In regards to Azerbaijan’s aggression and Turkey’s expropriation, Alexander said: “These historical events remain supremely relevant to Armenian people in Yerevan, Artsakh, Sur and across the globe.”

ANC Australia Executive Administrator Arin Markarian said: “We thank Mr. Alexander for this highly commendable statement during these tough times. Again, his strong stance and voice has shown why he is a great advocate for human rights issues, and a great friend of the people of Nagorno-Karabakh.”

“It is very important that other MPs and Senators join in a united effort to condemn the violent aggression that Azerbaijan has initiated against the Armenians of the Republic of Nagorno-Karabakh, and Mr. Alexander has done himself well to lead the way on bringing awareness to this issue in Australia.”