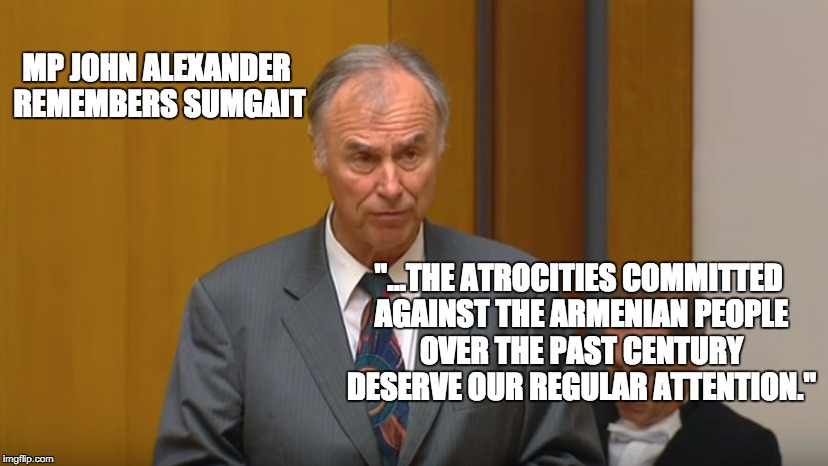 CANBERRA: On Wednesday, 16 March 2016, the Federal Member for Bennelong, Mr. John Alexander, spoke in the Federation Chamber of Australia’s Parliament to commemorate the 28th anniversary of the Sumgait Pogroms that took place in February 1988.

During his address, Alexander spoke of the oppressive history of the region towards Armenians, stemming from the Armenian Genocide of 1915-1923 by the former Ottoman Empire, to the anti-Armenian Sumgait Pogroms, and how Azerbaijan’s poor human rights record has continued today.

Alexander talked about the history of the Sumgait Pogroms and how peaceful demonstrations held by the Armenian people living in Azerbaijan and in the region of Nagorno-Karabakh to re-unite with Armenia, turned sour as violence broke out “as an act of collective punishment”. He then went on to mention the manner of which destruction was brought about by Azerbaijani mobs, through systematic attacks and assaults on the Armenians of Sumgait, as well as brutal murders, tortures, burning, and rape of women and young girls.

Alexander stressed that the crimes committed in Sumgait “were never adequately prosecuted by the then Soviet or Azerbaijani authorities” and led to his explanation of Azerbaijan’s poor human rights record, and specifically mentioning the case of Ramil Safarov.

“This year the world will celebrate the 25th Anniversary of Independence of the Republic of Nagorno-Karabakh, and next month we will commemorate 101 years since the start of the Armenian Genocide,” stated Alexander.

In the conclusion of his speech, Alexander mentioned the lack of attention these cases have had in the media, in Parliament and in the history classes of schools. He then commented on how Armenians have been able to “flourish” and have been able to “proudly celebrate their cultural traditions”.

ANC Australia’s Executive Administrator, Arin Markarian said: “We thank Mr. Alexander for the heartfelt speech he made, remembering the innocent Armenian victims of the Sumgait Pogroms, while highlighting the chain effect that has occurred as a result of not condemning human rights violations and anti-Armenian behaviour by the Azerbaijani government.”