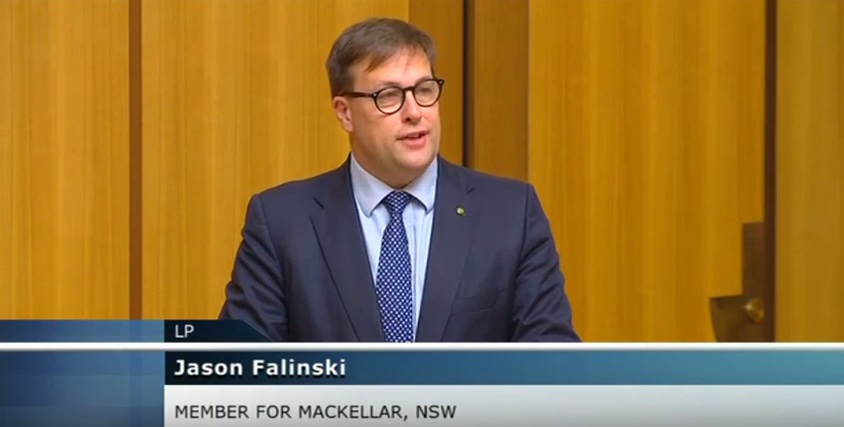 CANBERRA: Australian Member of Parliament, Jason Falinski has congratulated the 25th anniversary of Armenia’s independence by shining a light on the Armenian nation’s and its diaspora’s achievements, paying homage to Hamazkaine’s Sydney day school, Galstaun College, which is located in his electorate of Mackellar.

“There are few nations in the world who deserve to celebrate such an occasion more than Armenia,” Falinski told the Australian Parliament’s Federation Chamber.

“However independence did not come easily – Armenians have been subjected to genocide and the first Armenian Republic was formed in 1918, which lasted three years,” he added before discussing Armenia’s 70 years under Soviet rule until the current, modern Republic.

After acknowledging Armenia’s 25 years of growth as a nation, particularly its recent successes in Information Technology with a promising startup scene and the development of the ArmPhone and ArmTab (Armenia’s answers to the iPhone and iPad), Falinski turned to Galstaun College as an embodiment of the Armenian diaspora’s commitment to “promote and preserve their culture and indomitable spirit”.

He said: “Galstaun College was recently recognised by the Australian Curriculum Assessment and Reporting Authority as having demonstrated substantially above average gains in NAPLAN results… one of only six schools in the state to achieve significant gains.”

Falinski added: “The core ideals of the College are empathy, understanding and respect – no doubt the importance of these ideals are born out of the trials and tribulations of the Armenians’ long journey to independence.”

Executive Administrator of the Armenian National Committee of Australia (ANC Australia), Arin Markarian said: “We thank Mr. Falinski, a new Member of Parliament, for acknowledging Armenia’s independence and the country’s winding journey to achieving self-determination. We are proud to have our school, Galstaun College in the electorate of the Member for Mackellar.”