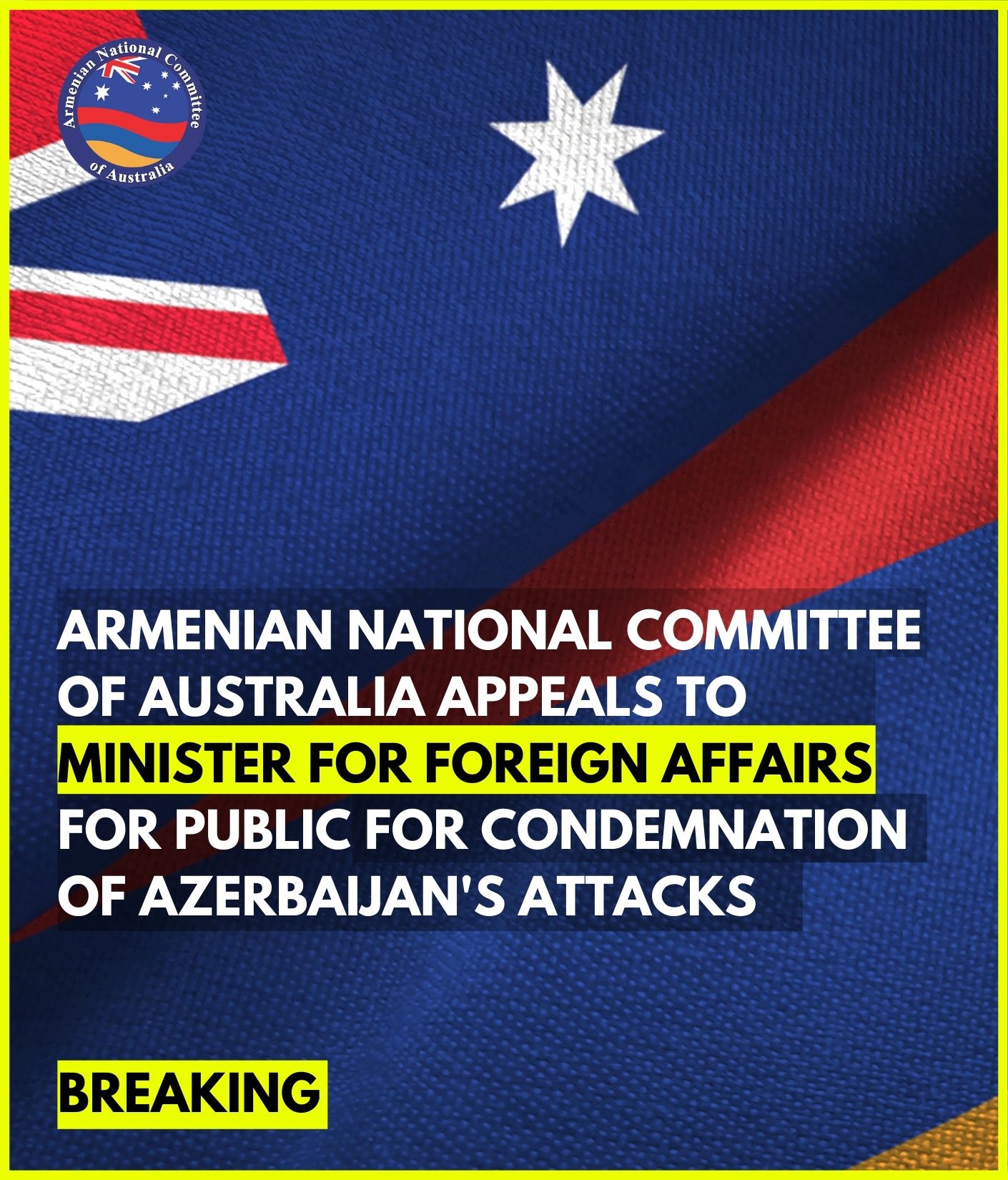 AUSTRALIAN GOVERNMENT URGED TO CONDEMN ATTACKS ON ARMENIA BY AZERBAIJAN

CANBERRA: The Armenian National Committee of Australia (ANC-AU) has appealed to Australia’s Minister for Foreign Affairs, Senator the Hon. Marise Payne, to join allies in publicly condemning Azerbaijan’s most recent attacks against the recognised, sovereign borders of the Republic of Armenia.

This follows previous representations made by ANC-AU on behalf of the Armenian-Australian community, regarding the issue of ongoing border incursions by Azerbaijan since they began on 12 May 2021.

The most recent attacks launched by Azerbaijan on Tuesday 16th November 2021, 1:00pm (local time) targeted the Syunik province on Armenia’s eastern border, and is the most major breach of the one-year-old ceasefire agreement brokered by Russia following Baku’s occupation of the self-determined Armenian Republic of Artsakh.

As a result of Azerbaijan’s military aggression, 15 Armenian servicemen were killed, five injured and a further 12 captured before Russia again stepped in to mediate what is an increasingly fragile ceasefire.

ANC-AU has elaborated on these factors in its appeal to the Australian Government whilst highlighting the wide array of condemnation from the international community, including France, Russia and the European Union.

The letter calls on Minister Payne to publicly call on Azerbaijan to withdraw its troops from borders Australia recognises as part of the Republic of Armenia. ANC-AU is also calling on Australia to support the resolution of the border crisis through peaceful negotiations to prevent further violations of international law.

“We request your urgent assistance, by following in the footsteps of our allies and calling on Azerbaijan to halt its illegal incursion into Armenia and demanding their immediate withdrawal,” the ANC-AU letter reads.

“The time for calling on ‘both parties’ to de-escalate tensions is over. It has only served to embolden Azerbaijan, who are now firmly within Armenia’s sovereign borders, which are recognised by Australia. The repeated aggressor needs to be called out and called to account by the international community.”

“Your public expression is of immense importance to our community, as de-escalating tensions in the region is integral in resolving the impending crisis through peaceful negotiations and preventing further violations of international law,” the letter concludes.

ANC-AU Executive Director, Haig Kayserian said: “We welcomed the Australian Government’s recent policy correction on Artsakh, to support the Helsinki Final Act’s guiding principles of self-determination, non-use of force and territorial integrity as a framework for the OSCE Minsk Group to settle the Nagorno Karabakh conflict.”

“However, it is increasingly clear that without proper and absolute public condemnation, Azerbaijan will continue to breach the 9 November 2020 ceasefire agreement and continue its inhumane policies of ethnic cleansing that spark troubling comparisons to the Ottoman heroes of Aliyev and Erdogan, who committed genocides against the Armenians, Assyrians and Greeks in 1915.”

“There is only one aggressor in the region and that is Azerbaijan. It is time this is made clear by the Australian Government. The public expression of disapproval of Azerbaijan’s actions is vital to de-escalate tensions and bring peace to the region,” added Kayserian.