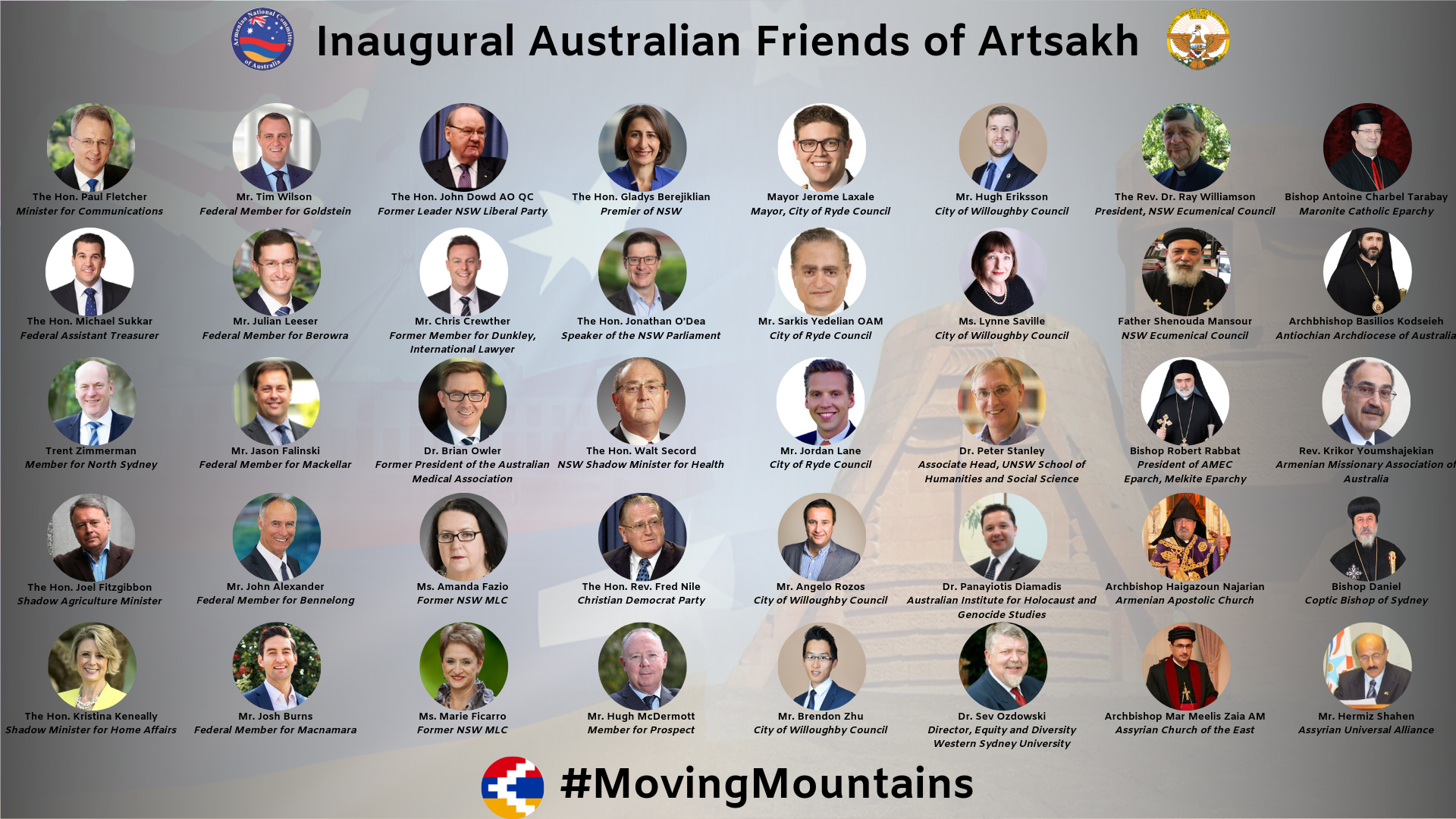 SYDNEY: The Armenian National Committee of Australia (ANC-AU) has announced the historic launch of the Australian Friends of Artsakh – a newly-formed group of 40 prominent Australians, including Federal Ministers and Parliamentarians, a State Premier and fellow State Parliamentarians, a Mayor and Councillors, academics, thought leaders, and heads of several religious and community institutions.

The announcement dubbed #MOVINGMOUNTAINS was made at the conclusion of a week of key meetings held by a visiting delegation from the Republic of Artsakh, led by Foreign Minister Masis Mayilian and including Member of Artsakh’s Parliament Davit Ishkhanyan and Artsakh Foreign Ministry official Artak Nersisyan, at an event attended by Sydney Armenians.

Artsakh Foreign Minister Masis Mayilyan welcomed the establishment of the Australian Friends of Artsakh. The Minister expressed confidence that a similar friendship circle will be launched in Artsakh, which “will serve as a significant channel for cooperation between the two nations”.

“To have 40 of the most respected Australian leaders – in politics, in academia and in communities – help us launch this circle of friends for Artsakh is humbling to Armenian-Australians, who treat this issue as a community policy priority,” said Kayserian.

“This is evidence that Armenians of the Republic of Artsakh are on the correct track in their journey towards international recognition, which will ultimately deliver the country the security, peace and prosperity its heroic people support.”

The Hon. Gladys Berejiklian MP, who is most prominent among Armenian-Australians as the Premier of Australia’s largest state of New South Wales, leads the list of State Parliamentarians among the inaugural Australian Friends of Artsakh, which also includes Speaker of NSW Parliament’s House of Representatives the Hon. Jonathan O’Dea MP and his fellow convenor of the NSW Armenia-Australia Parliamentary Friendship Group, Shadow Treasurer the Hon. Walt Secord MLC.

Dr. Hugh McDermott MP and Rev. Fred Nile MLC are also among the current NSW parliamentarians to join the group, along with former state political representatives, including Marie Ficarra and Amanda Fazio.

Among other inaugural signatories to the Australian Friends of Artsakh include Ryde City’s Mayor Jerome Laxale and Councillor Sarkis Yedelian, along with several Councillors from Ryde City and Willoughby City.

ANC-AU handed the Foreign Minister a plaque of the inaugural 40 signatories to the Australian Friends of Artsakh at a Sydney event on Thursday.

The signature by the Australian Friends of Artsakh signals their acceptance of the following call:

“The Armenian National Committee of Australia calls on prominent members of Australian society, members of government and civil society leaders to sign this letter, joining the Australian Friends of Artsakh, which supports the following:

1.- Upholding the right to self-determination of all peoples, as outlined in the charter of the United Nations, the Covenant on Civil and Political Rights, and the Universal Declaration of Human Rights, and the Helsinki Final Act.

2.- Promoting the peaceful resolution of the Nagorno-Karabakh conflict, supporting the right to the Armenians of the region to self-determination in the Republic of Artsakh.

3.- Condemning all attempted military or other suppression by force against the fundamental and peaceful human right of self-determination of the indigenous Armenian population of the Republic of Artsakh.”