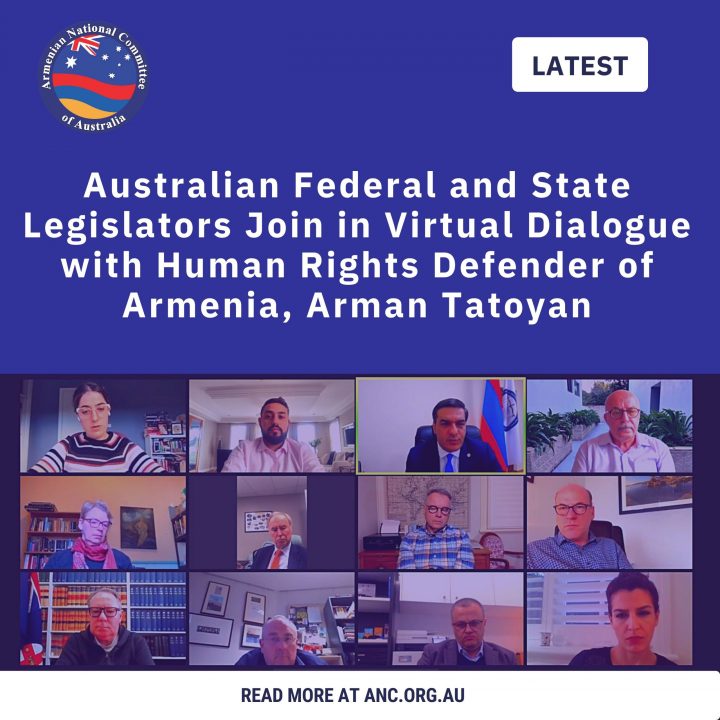 The legislators benefited from the audience with Tatoyan, who has been a foundational voice in raising awareness and seeking the withdrawal of Azerbaijan from Armenia proper, justice for the war crimes committed during the Artsakh War, along with the ongoing issues related to Armenian prisoners of war and other international law abuses committed by Baku throughout and since their occupation of indigenous Armenian lands.

The virtual dialogue provided the Australian party an opportunity to hear from Tatoyan regarding the latest news on the ground in Armenia and Artsakh, and ask questions on the unfolding border escalations being launched by Azerbaijan, following the 2020 Artsakh War.

Tatoyan also raised the issues concerning the ongoing illegal detainment of Armenian prisoners of war (POWs) held captive by the Aliyev regime and the inhumane torture and ill treatment whilst held captive in Baku’s prisons.

The Australian parliamentarians in attendance were joined by members of the ANC-AU National Board, the ANC-AU Head Office and the Permanent Representative of the Republic of Artsakh in Australia, Kaylar Michaelian.

“We thank all our political friends who participated in this intimate dialogue and thank Mr. Arman Tatoyan for providing an accurate reflection of the challenges being faced by Armenians on their ancestral homeland,” said ANC-AU Executive Director, Haig Kayserian.

“Each bogus trial against an Armenian prisoner of war, each attack against the sovereign borders of Armenia and indigenous lands of Artsakh, and each soldier wounded or killed sees a continuation of the trauma our community experienced during the 44 days of war crimes that decimated our motherland.”

Kayserian continued: “It is for this reason that it is imperative that our elected representatives are aware that the critical and continuously developing situation in Armenia and Artsakh is causing concern to Australians of Armenian origin, and commit to continue raising these issues in the hallways of power across Australia.”

“We reiterated our call on the Australian Government to publicly condemn Baku’s detainment and torture of Armenian POWs, and to call for Azerbaijan’s forces to withdraw from the internationally recognized borders of Armenia,” he added.