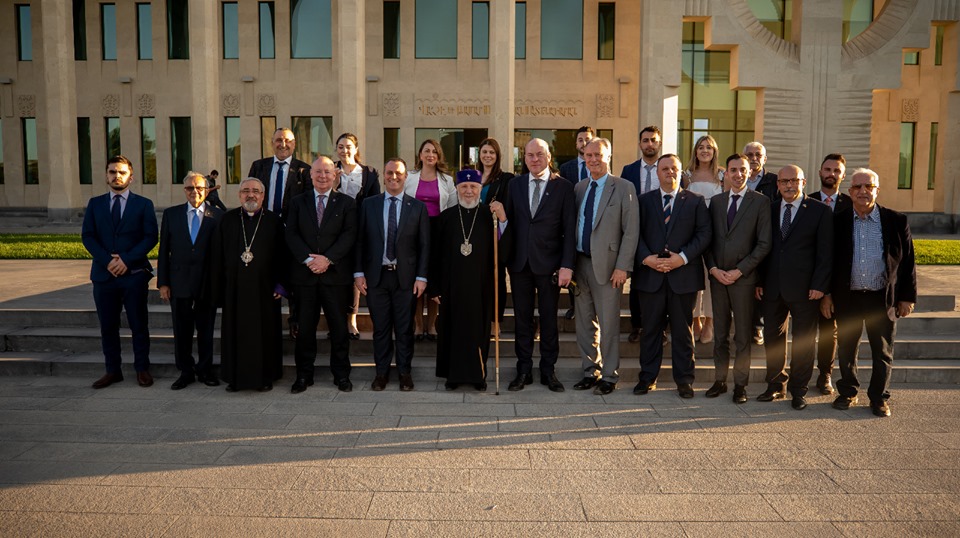 ETCHMIADZIN: The Catholicos of All Armenians, His Holiness Karekin II welcomed the Armenian National Committee of Australia’s (ANC-AU) Australian Delegation to Armenia at the Holy See of Etchmiadzin on Sunday 22nd September 2019.

Members of Australia’s Parliament Trent Zimmerman, Tim Wilson, and John Alexander, as well as Member of Parliament of the country’s largest state of New South Wales Hugh McDermott were amongst the 20-person team who visited Etchmiadzin and visited the museum before meeting with Karekin II.

The Catholicos thanked the delegation for making the long journey from Australia, thereby solidifying their support for Armenian issues of importance.

He discussed the importance of justice for the Armenian Genocide, and the absolute priority of preserving the rights to self-determination for the Armenians of the Republic of Artsakh.

Wilson, who is the only Federal Australian parliamentarian of Armenian descent, handed the Catholicos a memorial boomerang on behalf of the Australian Delegation to Armenia, while all MPs addressed His Holiness to thank him for his blessings and hospitality.

The first Federal-led Australian Delegation to Armenia began on 22nd September 2019, with visits to the Armenian Genocide Memorial in Yerevan and meetings with the country’s President, Prime Minister and Foreign Minister among the early highlights.