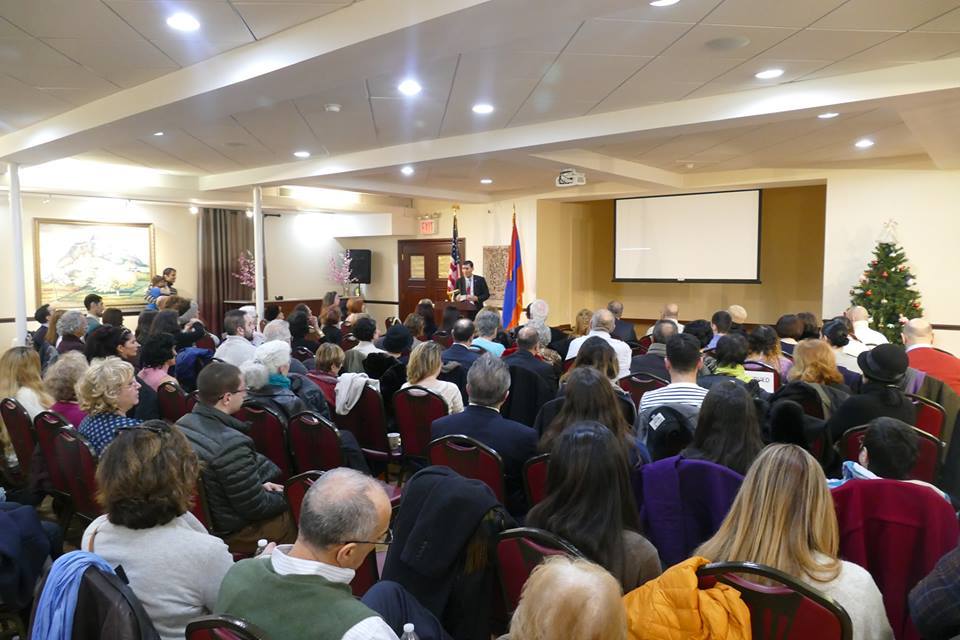 (ARMENIAN WEEKLY) WATERTOWN, Mass.—The Armenian National Committee of America Eastern Region (ANCA-ER) started the year off with the screening of the much anticipated film about the Artsakh (Nagorno-Karabagh/NKR) War “The Line” (“Kyank u Kriv“), which premiered on the east coast in Washington, D.C. on Jan. 13 in New York on Jan. 15.

The Armenian National Committee (ANC) of Greater Washington in partnership with Hamazkayin Armenian Educational and Cultural Society of D.C. organized the screening of the critically acclaimed movie at the Soorp Khatch Armenian Apostolic Church on Jan. 13. “The Line” is a powerful story of love and patriotism set during the 1990’s Artsakh liberation effort. Through the film, the audience follows young Tigran in his incredible journey from timid teenager to brave soldier, fighting for Artsakh’s freedom.

The New York event opened with the observance of a minute of silence to commemorate Hrant Dink’s legacy. Rev. Fr. Mesrob Lakissian provided opening remarks thanking the organizers and U.S. promoter of the movie Samvel Hovhannisyan, who had travelled from Glendale, Calif. to be present for the screenings. “The Armenian Church is home for all the Armenians and we are delighted to organize and bring together our people to learn more about our history and our culture,” said Lakissian.

In his welcoming remarks Dr. Artur Martirosyan, St. Illuminator’s Board Trustee and ANCA-ER Community Outreach and Communications Director noted, “We greatly value and strive towards greater community cohesion and unity around the Artsakh issue as well as other national priorities. I call upon our community to become more involved within their local communities, including the church, Hai Tahd, cultural, and educational activities. Besides sending humanitarian aid to Artsakh, it is especially important to be engaged in political advocacy, which will ensure the just and durable resolution of Artsakh conflict based on historical truth and the inalienable right of Artsakh’s people to self-determination,” Martirosyan.

Directed by the Moscow-based Mher Mkrtchyan, the film was recognized Best Picture at the Anahit Film Festival held in Armenia in Dec. 2016. The proceeds of the event at St. Illuminator’s Cathedral were donated to the ANCA-ER Endowment Fund to support its activities in Eastern U.S.

The film was also screened by the Hamazkayin Boston chapter on Jan. 16 at the Armenian Cultural and Educational Center of Watertown, Mass.

Cover photo: A scene from the New York screening