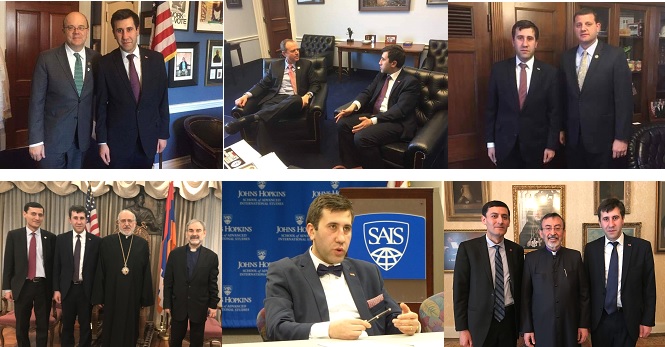 “We were happy to be able to connect Mr. Melikyan with key officials and groups during his visit to the U.S.,” said ANCA-ER Community Outreach and Communications Director Dr. Artur Martirosyan. “Today, in the midst of rising autocratic and populist tendencies in the entire region, Artsakh stands as a beacon of democracy, human rights, and freedom. We are proud of the progress that the Artsakh Republic has made in upholding Western values and traditions since its independence a quarter century ago.”

His Washington, DC itinerary included two public talks and a series of meetings with various groups and officials. On March 15 Melikyan headlined an event entitled, “Human Rights in Non-Recognized States: The Case of Karabakh” at the prestigious Center for Transatlantic Relations at the Johns Hopkins University School of Advanced International Studies. Benedikt Harzl, Austrian Marshall Plan Foundation Fellow at CTR, moderated the event. The Embassy of the Republic of Armenia to the United States hosted Melikyan for his second public event where he presented his recent report “Atrocities Committed by Azerbaijan During the 2016 April War” and answered questions from the audience.

“It is important to deliver Artsakh’s message throughout major capital cities in the world,” said Melikyan. “I am thankful to the ANCA Eastern Region for organizing such a fruitful visit to Eastern United States and look forward to collaborating with all of our partners throughout the Diaspora to raise awareness and understanding about Republic of Artsakh and its unique human rights situation.”

Melikyan’s visit to Washington, DC also included an interview with the renowned Foreign Policy Magazine as well as discussions with reporters from The Washington Post. He also met with other leading human rights, civil society, and public policy organizations discussing the general human rights situation in Artsakh Republic and the projects that his office undertakes to safeguard and further strengthen the overall human rights situation in the country. Melikyan also met with ANCA coalition partners In Defense of Christians, A Demand For Action, and the Hellenic American Leadership Council, where he shared the details of his report on the Four-Day War. The parties also exchanged ideas about regional developments and held consultations.

His visit to Washington, DC concluded with meetings held on Capitol Hill with various Members of Congress, including House Intelligence Committee Ranking Member Adam Schiff (D-CA), Armenian Caucus Co-Chairs Dave Trott (R-MI), Jackie Speier (D-CA), and David Valadao (R-CA), and Rep. Jim McGovern (D-MA). Melikyan touched upon the duties and responsibilities of his office, the general human rights situation in the country, and challenges facing the region. The Ombudsman’s last Capitol Hill stop was the event commemorating the one-year anniversary of U.S. recognition of ISIS Genocide, where Melikyan was present in solidarity with all the victims of this horrific atrocity.

Mr. Melikyan’s visit to the U.S. further strengthened Artsakh’s voice in the international arena and was widely publicized by Voice of America Armenian Service, Armenian Public Television, The Armenian Weekly, and many other media outlets.